Elon Musk is reported to have a net worth of $270bn (£223bn) according to Forbes/ Credit: Getty Images

It was news no-one expected, and for a while it sent social media and the football world into a frenzy.

Was the world’s richest man going to buy Manchester United?

Just after 01:00 BST on Wednesday, Elon Musk – who is reported to have a net worth of $270bn (£223bn) according to Forbes – posted on Twitter: “Also, I’m buying Manchester United ur welcome.”

Cue pandemonium on the social network, with the American’s tweet receiving more than 400,000 likes.

It has been a painful start to the new season for United.

They are bottom of the Premier League after two defeats, star player Cristiano Ronaldo could leave, while new signings are failing to materialise.

Their fans are restless, and earlier this week the Manchester United Supporters Trust said it will “demand answers” from those running the club after a “humiliatingly bad” start to the season.

The club has been in decline since Sir Alex Ferguson retired as manager in 2013, and fingers have been pointed at the Glazer family, who have owned the club since 2005.

There have been multiple protests against the Glazers’ ownership in recent years – including one in May 2021 which caused the Red Devils’ match against Liverpool to be postponed.

United fans are planning another protest against the American family during their latest meeting with their bitter rivals on Monday.

Some fans welcomed Musk’s interest in their club, which was valued at $4.6bn (£3.8bn) by Forbes earlier this year.

Other fans wondered what a club run by Musk would look like, given he also owns rocket company SpaceX and electric car company Tesla. 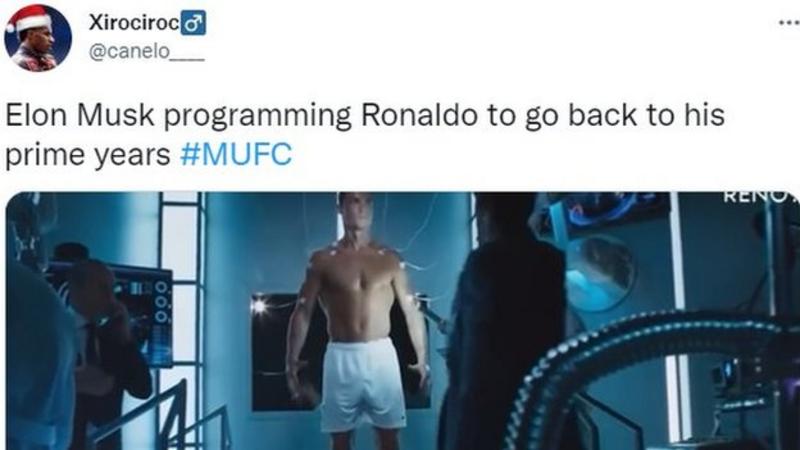 But the thought of Musk branching out into football was short-lived.

Just as the UK was waking up, Musk was asked if he was “serious” about the bid, and replied at 5:34 BST: “No, this is a long-running joke on Twitter. I’m not buying any sports teams.”

He added: “Stand-up is my side-hustle.”

But it turns out he is fan of the Red Devils, tweeting: “Although, if it were any team, it would be Man U. They were my fav team as a kid.”

No, this is a long-running joke on Twitter. I’m not buying any sports teams.

Although, if it were any team, it would be Man U. They were my fav team as a kid.

You never know what the future holds.

Just woke up from a crazy dream. Elon Musk said he was going to buy Manchester United.

Anyway, going back to sleep now.