Local airline operators, PassionAir, has confirmed an ‘abusive incident’ that occurred at the Kumasi Airport on Monday.

The airline says its attention has been drawn to a post on social media insinuating discrimination as that was not the case as they do not discriminate in service delivery on the basis of race, gender, religious beliefs or orientation.

The incident, according to the airline, involved their check-in agent and a Caucasian lady who showed up late for her 7:30 am trip to Accra.

“Upon arrival at the counter, our check-in agent had just completed the check-in formalities, closed the counter and handed over the passenger details to the Captain of the flight.

“The Caucasian lady in question had already checked in and was waiting to pick up her boarding pass when the aggrieved came to the counter and insisted to be checked in even though the counter was closed by then,” part of the statement read.

PassionAir indicated despite an assurance from the agent to assist the customer to travel on the next available flight, the latter resorted to verbal attacks to the surprise of the agents and other passengers at the check-in area.

“Bystanders had to apologise on behalf of the aggrieved passenger who showed no remorse for her abusive conduct.

“Despite her unacceptable behaviour, the aggrieved was eventually put on our 10:00 am flight to Accra,” it said.

The airline has stressed they appreciate and treat all customers with respect and without any form of discrimination.

“We see our customers as partners, vital to our growth as an airline and continually seek to meet the travel needs and expectations of our cherished customers,” the statement assured. 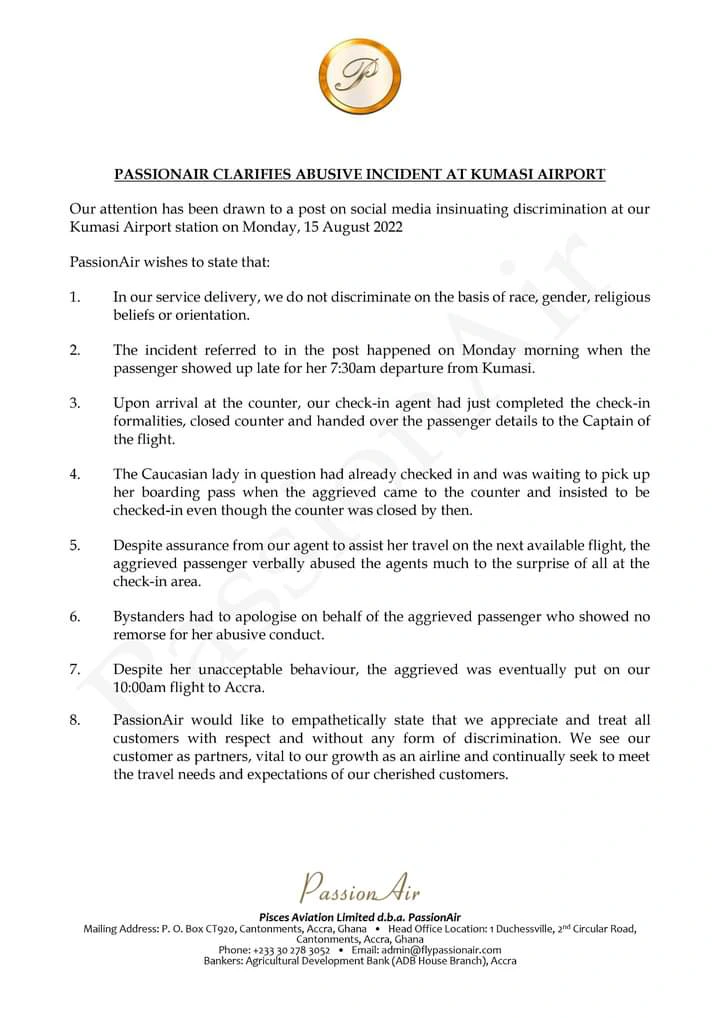