Spirituality and prayer camps are not the main sources of solutions to Ghana’s rising breast cancer incidence. Early reporting of cases to medical facilities is the most practical solution, as shown by statistics.

In an interview with the media today, Dr. (Mrs.) Beatrice Wiafe-Addai, president of BreastCare International (BCI), said that while she did not try and reduce the power of prayer and faith, a high number of breast cancer deaths were a result of people turning to spiritual guidance rather than conventional medical treatment.

Dr. Wiafe-Addai, who is also the CEO of Peace and Love Hospital, said 4,600 Ghanaians were currently diagnosed with breast cancer each year, out of which 2,000 lost their lives to the disease. He was speaking at an event to kick off this year’s Breast Cancer Awareness Month at Tepa in the Ahafo Ano North District. 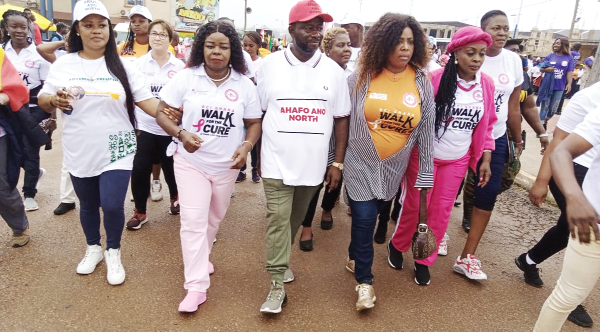 There is no evidence that witchcraft or a curse caused breast cancer. Once people seek early assistance at a medical facility, there is a solution for it “First female general surgeon in Ghana to treat breast cancer, Dr. Wiafe-Addai, remarked.

Breast cancer won’t rest, so why should we? was the theme of the event, which also served as the 10th annual national Breast Cancer Ghana Walk for the Cure.

The exercise, which aimed to raise awareness of the condition, was held outside a regional capital for the first time.

The occasion was attended by people from various areas of life and the medical field, Iamane Quaadil, the Moroccan ambassador to Ghana. Obaapa Christy, Akosua Agyepong, Patience Nyarko, and Assistant Commissioner of Police (ACP) Kofi Sarpong were among the music legends present to show support.

As Akosua Agyepong relived her dancing days on stage to thunderous applause, the musicians delighted the durbar’s crowds with their sparkling renditions after the walk.

The chief of the traditional area, Nana Adusei Atwenewaa Ampem I, had a specific role to play in the fight against the sickness, according to Dr. Wiafe-Addai, who also said that Tepa was chosen to honor him on his 60th birthday.

Free screenings for women attending the durbar were also included in the program.

Content created and supplied by: Bronzeman (via Opera
News )