Another Ghanaian artiste has stepped forward with plagiarism allegations with regard to the scandalised tourism advertisement posted by President Akufo-Addo on Tuesday.

In a press statement, the founder of New Africa Nation, Nana Richard Abiona popularly known as Fuse ODG disclosed that his authorisation was not sought nor was he credited for snippets of his “New African Girl” music video in the ad.

He hinted that his team is in talks with the Ministry of Tourism, Arts and Culture and their lawyers for a resolution.

New Africa Nation came out after Kirani Ayat, an artiste raised concerns about the use of his “GUDA” video in the ad without his authorisation or credit.

“We sympathise with Kirani Ayat. As creative persons, we sacrifice a lot to be able to put together a song, let alone a whole video with high-quality production value.

“As a , we have stayed true to our own mission- investing hundreds of thousands of dollars to promote Ghana over the years which we will continue to do”, it said.

The believes that the government can take corrective actions by compensating those whose rights have been abused.

With the lack of respect for Intellectual Property Right in Ghana, the recognises that it goes beyond the office of the President.

It suggeted that “going forward, the solution must be to invest in more education around Intellectual Property Right”. 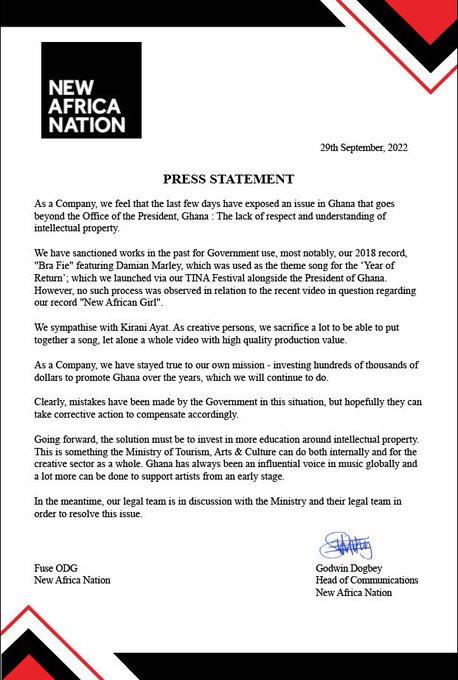 Content created and supplied by: GeneralConceptMedia (via Opera
News )