The 3 Deadliest Lakes In Africa

1 700 people and over 4 000 livestock were killed in just one night by a lake. They didn’t die because they drowned, but just because of the fact that they lived by a dead lake. Which lake could this be stuck around to find out? When you think of a lake, the first thing that comes to everyone’s mind is a cool pool of water, where you can swim, sail or just sit and enjoy the serene beauty of this body of water.

Well, I don’t think you would want to go anywhere near these Three Lakes im about to mention in this article or want to swim in them.

On the night of the 21st of August 1986 in a small village in Cameroon, a particular Lake, known as Lake Nyos, erupted. That night this Lake, which is found in the crater of a dormant volcano emitted, not lava, not ash, not hot mud, but rather a cloud of cool carbon dioxide gas that silently raced down the slope, killing almost every living thing it found on its way.

Lake Nyos released about a quarter of a cubic mile of carbon dioxide that night traveling about 45 miles per hour downhill. This left 1 746 people and over 3 500 livestock in the nearby village dead that night, most of them in their sleep. In the town of Nyos itself, no soul was left and every living thing died. 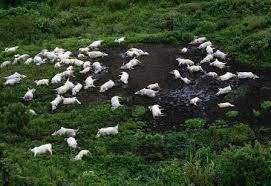 This was the first time this has ever happened, and this was because of a landslide. However, not everyone died there were some survivors. For the few survivors, the situation they woke up to was extended beyond terror, and it was horribly so real. Some of the people who survived couldn’t wake up not until two days later on and when they did everyone around them was gone. Their families, neighbors, and friends, are all gone.

Going out of their houses most of them thought some forces from the underworld had attacked them and that the entire world had come to an end. Every person they knew was gone, their chickens lay dead in the streets, and their livestock lay dead in the fields. In fact, even insects were dead. Their lives would never be the same again. For a very long time, the cause was unclear as the fields were green. No house was knocked down, the sun was shining and nothing was burned down. Other than the lying bodies everything was intact. 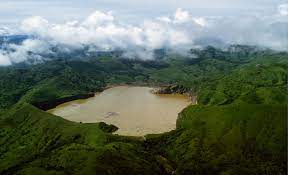 Initially, there were suspicions of an epidemic outbreak and only people with natural immunity survived, but the government officials that came in later didn’t fall sick. It then became clear that something else was at play here and that something else was no other than carbon dioxide. Lake Nyos is now actively studied and a degassing strategy has been implemented, aiming to prevent a repeat disaster. However, there are other Crater Lakes in Cameroon.

It lies on the other side of Africa, far away from Cameroon bordering the Democratic Republic of the Congo and Rwanda. Just like Lake Nyos in Cameroon, gas is also released from the floor of Lake Kivu. But in this case, it is not just carbon dioxide, methane, which is basically natural gas, like the ones used in our homes in stoves and furnaces, is also admitted. These eruptions are called Limnic Eruptions. 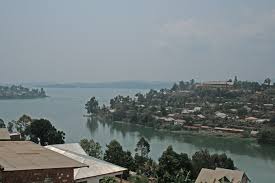 Exactly what the consequences and risks this has for the people who live around Kivu are unclear, but one should probably take note of two facts. Natural gas, burns, and Lake Kivu is more than a thousand times larger than Lake Nyos. Due to Kivu’s size and the high population density along the shores of the lake, some have stated that a Lake Nyos event at Kivu would result in one of the largest natural disasters in human history. 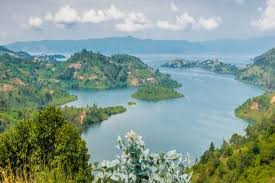 Volcanoes it seems present a threat to humans long after their eruptions have echoed into history continuing to threaten lives along the cool shores of the Lakes they create. But it is said that it can be tapped as an energy source which will help in averting disaster. Compared to Lake Nyos, where only 14 000 people lived around the lake at the time of its disaster. More than two million people live in the vicinity of Lake Kivu, roughly one million residents of the city of Bukavu in the Democratic Republic of the Congo. If Kivu were to erupt, says the knowledge star of the University of California Santa Barbara, it would be completely traffic.

Natron found in Northern Tanzania just over 100 kilometers Northwest of the city of Arusha, is like no other Lake, you’ve ever seen or heard about, or perhaps even imagined. But why? Well for starters, parts of it sometimes turn red and we bet you’ve – never seen a red Lake before. This lake is 56 kilometers long from north to south and 24 kilometers wide. So what makes this lake so deadly? The Water of Lake Natron is very high in cyanobacteria. 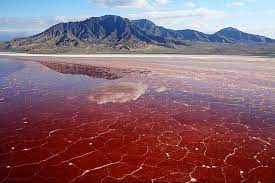 This is a bacteria that releases a chemical which in turn, damages the cells, nervous system, and livers of most of the organisms that have consumed it. Many of the birds and animals that drink from Lake Natron wind up dead as a result. 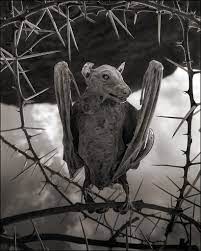 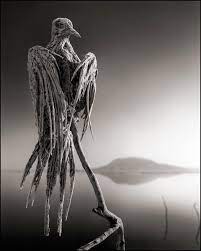 The animals, birds, and bats that die in the water are calcified and turn into mummified versions of themselves. But despite the fact that this lake is deadly that a certain species of birds, the flamingos which thrive where others perish. Flamingos aren’t negatively affected by the bacteria in Lake Natron that harms most other birds. The lake is actually the largest breeding ground in the world for lesser flamingos. 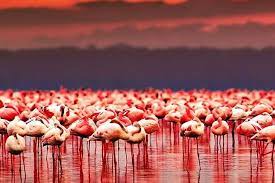 This Lake can really be hot sometimes. The Lake’s temperature can rise to 60 degrees Celsius in summer. What makes this lake so red? Well, the cause of the color is a type of algae, a type of bacteria that flourishes in solar Lakes and often creates algae blooms, which in turn color the water. The algae bloom of Lake Natron wax and wane such that the Lake’s redness is not a fixed hue. The fringe of the lake also often looks more orange than red.

Content created and supplied by: Laazio (via Opera
News )