Kaieteur News – Councillor Khemaj Surujpaul said he was pleased with the turnout of the teams at the Wakenaam Neighbourhood Democratic Council (NDC) Independence dominoes competition which was contested on Sunday last at Carlosh Sports Bar, Good Success. 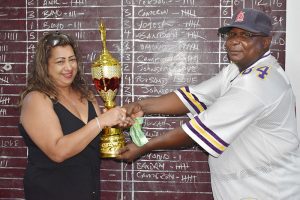 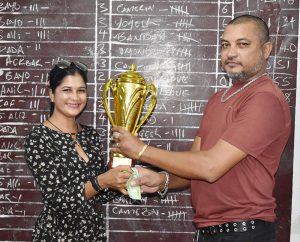 Surujpaul stated that the teams showed a high level of discipline in the closely contested affair. Surujpaul, who is also the chairman of the Wakenaam Cricket Committee said he wants to see more such tournaments and would like to call on the business community for support.
He said the NDC will continue to support the development of sports and will work closely with the relevant sporting bodies to ensure its success.
Police, led by Andy Cameron with 18 games emerged victorious in the competition.
Police marked 68 games while runner up Underdog made 66 and third place Pensioners scored 64.
Cameron was voted man-of-the-match and he was well supported by Dhipchand Bandan with 14 games and Egbert Johnson, 12.
Keval Persaud top scored for Underdog with 16 games while Vickram Ramnarine made 15 and Vikraj Ramdhanie chipped in with 12.
Anil Ramrattan scored 16 games for Pensioners while Shafdar Ali made 12 and Ackbar Ali claimed 11.
The winning team collected a trophy and $30,000 and the runner up took home a trophy and $5000. Cameron pocketed a trophy and $5000. 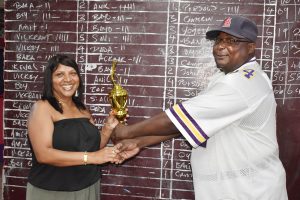