Drunken man kills friend for refusing to drink with him

Drunken man kills friend for refusing to drink with him

Kaieteur News – The family and friends of Rohit Hansraj, a labourer from Wakenaam, Region Three were thrown into a state of mourning on Saturday after he was reportedly shot dead by one of his co-workers. 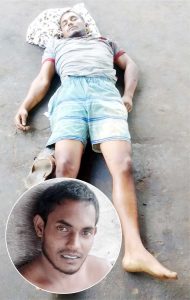 The incident, which claimed the life of the 29-year-old father of two, occurred around 14:00hrs at Tiger Creek, Essequibo River, Region Seven. He was reportedly shot by a 35 year-old man of Aliki Village, Essequibo River, the Guyana Police Force (GFP) said in a report on Monday.
Kaieteur News understands that at the time of the shooting, the men were employed with Toolsie Persaud Logging Company as operators.
Police stated that around 14:00hrs that day, Hansraj, along with two other workers, were consuming alcohol at the area, when the suspect approached one of the other workers and accused him of “looking” at his wife.
According to police, Hansraj had intervened and managed to get the suspect to return to his cabin.
The suspect, shortly after, retuned with a shotgun and he and Hansraj got into a heated argument which then turned deadly.
Police revealed that the suspect discharged a round from the firearm which struck Hansraj to his upper left shoulder area.
This publication has learnt that Hansraj resides in the Tiger Creek area with his wife and the two were expecting a child together.
Speaking with Kaieteur News, one of Hansraj’s sisters, Lilowti Hansraj, said that her brother and the man who reportedly shot him were very good friends and that they worked together in the area for a number of years.
According to her, Hanraj’s wife who was at the scene related to them that on the day of the shooting, the suspect who was already in an intoxicated state had approached Hansraj to drink with him.
She learnt that Hansraj had refused to drink with the man and had asked him to go to his cabin and sleep. The man continued to ask her brother to drink with him but he still refused. It was because of his refusal, the suspect became angry at Hansraj. According to the woman, the man started to curse Hansraj and allegedly threatened to kill him and everyone who was at the scene.
She related to this publication that the suspect left and returned shortly after with a handgun pointing it at Hansraj. “He come and point the gun to my brother and said he don’t bluff, and she (Hansraj’s wife) said when he point the gun, she scream and then he fire the shot straight to my brother chest,” Lilowtti related.
The police in their report said the suspect allegedly escaped into some nearby bushes with the firearm.
They noted that when ranks arrived at the scene, the body of the deceased was seen lying face-up clad in a pair of blue trousers and grey jersey. His body was examined and a gaping wound was seen to his upper left shoulder.
The body was taken to the Bartica Hospital where a doctor pronounced him dead officially.
While a post mortem is scheduled to be conducted on Hansraj’s remains, investigation into his death continues. Hansraj, who was described as a very friendly person, leaves to mourn his two-year-old and five-year-old sons and other relatives.