“Those elevators will be commissioned before the end of this year”These were the words of Minister within the Ministry of Communities, Annette Ferguson, at a press conference yesterday. 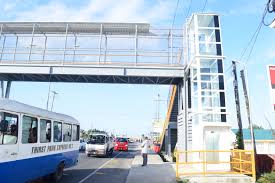 She was responding to a question, requesting an update on the status of several overpass elevators that were still not operational even though they were installed since June 2018.
From all accounts, it appears as if the Ministry of Public Infrastructure has failed for a third time to make operational overpasses and elevators at several locations along the East Bank Demerara Highway.
After noticing that most of the elevators and overpasses were still inactive after the June 2018 installation Kaieteur News had attempted, in March 2019, to solicit a response from Minister of Infrastructure, David Patterson on the prolonged delay.
Through his Public Relations Officer, Krest Cummings, the minister had then informed that both elevators and still inactive overpasses would have been officially commissioned and be made operational before the May 26 Independence Celebrations.
However after that deadline, Kaieteur News again contacted Cummings, who related that they were waiting to train personnel to man the operations of the elevators, after which the elevators would have been made operational.
These employees were supposed to be selected by management of the Demerara Harbour Bridge, according to Cummings. She also said that a special surveillance system will be created at the Demerara Harbour Bridge and hooked up to units at the overpass locations to ensure effective monitoring on what goes on at the overpasses.
Noticing that the elevators were still not commissioned at the time thereafter stipulated, Kaieteur News again contacted Cummings who could not give an explanation for yet another delay.
Neither could she say what had contributed to the elevators still being inactive. Another suggested commissioning date also elapsed.
When Krest Cummings was again contacted some time later, she refused to comment on the issue, indicating that any updates and information on the elevators will have to be made by way of email.
Sources at the Demerara Harbour Bridge could not provide any information on any of their employees being trained so far to operate the elevators, as was indicated by Cummings. Minister David Patterson has been mum so far on the issue as well.
On April 24, last, the Ministry of Public Infrastructure reported several cases of vandalism on the bypasses, Diamond, and Providence, East Bank Demerara, in which vandals had stolen electrical, and solar panel lights, no cycle and disable signs, corrugated electrical wire covers, removed earthing connection, and protective covers. Camera wires were also disconnected at the Diamond bypass as reported by the ministry.
Many have expressed their opinion that since the installed structures have been left in the same manner for over a year now, they would have become perfect targets for vagrants who seized the opportunity to remove items and probably sold them at black market prices.
The overhead walkways at Providence and Diamond villages were each said to be built at a cost of $77M, while the cost for supply and installation of each elevator is tabled at US$61 000.

Salah scored 100 (73+27) points in 116 games in the Premier League. Only Shearer reached this mark faster
Alaves Garitano dismissed after five defeats in a row. The club is in 15th place in La Liga
Mane scores 20+ goals for Liverpool for the 3rd consecutive season
If you whistle one violation, whistle another. VAR rules football! Athletic midfielder Dani Garcia on the match with Real Madrid
Lautaro did not score a penalty in the match against Bologna
CEO of the banner of Labor about a player who was hit by lightning: he was put in an artificial coma. Most likely, it will be taken out in the evening
Real goes into the gap under the talk of refereeing. In similar moments, Madrid were given a penalty, but Athletic were not
Source https://www.kaieteurnewsonline.com/2019/07/20/overpass-elevators-miss-third-deadline-to-be-commissioned-before-year-end-minister-ferguson/

$9.4B deficit recorded by State-owned companies in 2019

Trade and Integration in the World after COVID-19: Opportunities and Challenges for Latin America and the Caribbean

The PNC will not ‘go easily into the night’

TIPS TO HELP REDUCE PLASTIC USE

“My daughter was drugged, raped, murdered; I know that” – Shonette Apple

It is time for Guyana to move on!

When can we put aside our differences?

Democracy would have been hijacked

Guyanese are experiencing our toughest period

An open letter to President Granger

Import coverage, the stock of foreign reserves in an oil economy

“We, as a batting unit, need to stand up in this series”

“We have done fairly well in containing COVID-19” – Caricom SG

Over 1300 persons repatriated to Guyana

Several injured in smash-up at Bagotstown

MY TURN | GUYANA’S SOVEREIGNTY ON TRIAL

Women Across Borders – continuing the mission

Lessons for myself from a conversation about domestic violence

The future of academia in Guyana

No support from TTCB boss for Cameron’s ICC bid

The UWI offers condolences on the passing of Sir Everton

Mistake and beefsteak are different steaks

CDC lends support to Santa Rosa ahead of lockdown

Regulator gets tough on health certificates for imported food and drugs

How oil companies rip off nations

STANDARDISATION AT THE LEVEL OF THE CARICOM REGION

Get on with it, get it done

Coronavirus: Life in the ER is getting tougher; help us to help you

Caribbean Public Health Day: In a time of COVID-19

Our front line worker of the week is… Dr. Coleen Adams

How much trouble is Huawei in?

Eligibility for U.S. Government Benefits due to Coronavirus and the “Public Charge” Rule