…civil society groups insist earnest action needed to improve process
Kaieteur News- As civil society bodies and other concerned citizens up the pressure on government for not seeking better oil deal for the nation, international analyst Arthur Deakin has reminded that the most viable option to keep politicians in line is the power possessed in the country’s electoral system.
Deakin was at the time answering questions concerning the inability of citizens to force the government into demanding more benefits from offshore operator, ExxonMobil Guyana, when he pointed out that they must utilise their voting rights to cause their leaders to listen.
Deakin, Co-Director of Energy at Americas Market Intelligence (AMI) is among numerous international oil industry personnel offering advice and input to Guyana. He said “What it really comes down to, is going out to vote and holding politicians accountable…”Not only at the presidential elections, but the utilization of municipal and regional elections also contribute to the power citizens have over their leaders. “That’s the best way to hold your politicians accountable and responsible for their actions and words,” Deakin submitted. 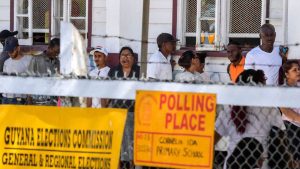 A strong electoral system ensures citizens’ power over their leaders

Guyanese have literally begged the current government to adjust the oppressive provisions in the “lopsided” 2016 Production Sharing Agreement (PSA) signed by the former A Partnership for National Unity + Alliance for Change (APNU+AFC) government. The PSA entails provisions where Guyana is either losing out big from financial loopholes or placing the country at significant environmental risk. These would include non-binding commitments between Guyana and Exxon Mobil toward the country’s environmental perseveration; meager amounts for unauthorized flaring, significant tax exemptions that costs Guyana millions of US dollars, no ring fencing provisions and the withdrawal of revenue from profit oil for work to be done years into the future among other issues.
During his interview with this newspaper, Deakin had shown how Guyana was not following international standards regarding transparency of its NRF. He told the Kaieteur News that there still seems to be no program or structure in place looking at the amount to be spent by the Natural Resources Fund (NRF) detailed line by line. “We don’t know exactly where those funds are going and who are getting it.” Deakin believes that in the name of transparency, a third party independent task force is urgently needed. He said that while there seems to be an accountability team in place, those persons are selected either directly or indirectly by the government, thus defeating the transparency purpose.
Outside of this, the government is yet to activate the Petroleum Commission Bill which would allow for the appointment of an independent regulator that would be responsible for monitoring and enforcing Guyana’s modernized petroleum laws. In fact, Vice President Bharrat Jagdeo had stated at an earlier press conference that the Petroleum Commission was not a safeguard against corruption although it was relevant to government’s regulatory architecture.
Deakin noted nonetheless that until Guyana puts certain measures in place, “… [It] will still lack the transparency that is needed.”
Given the advice that Guyana can basically leash their politicians via the electoral process, it would make more focus should be placed in that area by the Guyana Elections Commission especially since there is an ongoing process to strengthen the system. Given an extremely contentious 2020 elections where strong accusations of rigging were made by both the main political parties and the eventual charging of persons before the courts, it was believed that GECOM and/or the government would honour utterances to investigate the systematic failures that led to the break down in the process. Currently, consultation for the draft amendment of the Representation of the People’s Act (RoPA) is ongoing and that too seems to have some contention where the agency responsible for elections has not sat to offer a collective report on recommendations from its relevant members.
Additionally, some civil society organisations like the Electoral Reform Group (ERG) have also called for more public consultation regarding strengthening the election laws. And while the body made representation for certain changes during their consultation with the country’s Attorney General, they were informed that reform of the RoPA was only being conducted at the statutory level at this time. ERG’s Coordinator, Dr. Desmond Thomas had insisted that a comprehensive review of the electoral system was needed and that proposals offered by government were “too narrow” to foster real change within the process.
On the GECOM side, opposition Commissioners have called for an assessment of the Commission’s performance during the 2020 elections as this would lean toward better reform measures. Vice President Jagdeo said that persons are before the court for the illegal roles they played in the 2020 elections and that it was satisfied at this point. Opposition commissioners say that despite GECOM committing “in principle” to have the assessment done, they along with the government no longer seem interested.
Recognising the importance of the electoral process and its impact on citizens’ rights to transparently elect the leader of their choice, Article 13 member, Dr. Yog Mahadeo is in the process of writing to the international community, who sends missions to observe Guyana’s elections, to raise their voice in support of a Commission of Inquiry into the 2020 events. These missions played a key role in “safeguarding democracy” during the last polls. The Article 13 letters should be ready in the next two weeks.
Vice President Jagdeo admitted that pressure from citizens forced some first world countries to bow to their demands for greater royalties and windfall tax in their oil sectors. In Guyana’s case, the VP said the same could not happen here as Guyana is bound by a PSA with specific terms that would be considered a breach if changes were made to the current taxation regime.