PRESIDENT, Dr. Irfaan Ali, on Tuesday, appointed several persons, who he described as skillful, to serve as members of the Integrity Commission (IC) and the Police Service Commission (PSC).

Mohamed was unavoidably absent from the proceedings and will be sworn in at another date.

They were all sworn in by Chief Magistrate (ag) Judy Latchman, and both commissions will be serving for a period of three years.

The members of the IC were also appointed by President Ali following consultations with the Leader of the Opposition, Aubrey Norton.

“Allow me on behalf of the people of Guyana to congratulate these outstanding Guyanese on the appointments of various commissions,” the President said at the swearing-in ceremony held at Office of the President.

“As president, I have the confidence that the Guyanese appointed today have not only have the skills but they have the character to execute the duties that they are called upon to execute. So, I congratulate you, I wish you the best, and I continue to say that God’s blessings and guidance be with you and all the people of this beautiful country,” President Ali said.

He added that the persons sworn in to the two commissions are “outstanding citizens of Guyana.” 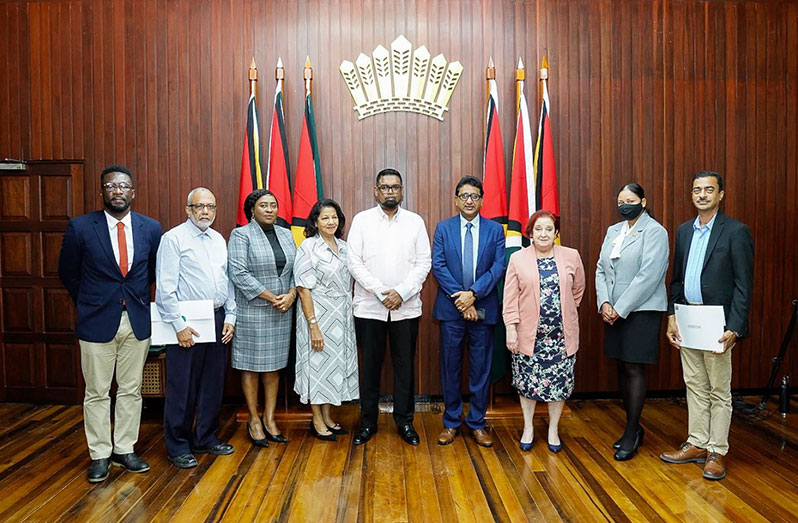 “I have said before that in chartering this course of “One Guyana,” we will seek out from among us those who have the credentials and are willing and ready to serve at every level in moving our country forward. It will not and cannot be based on any other principal but that of fairness, justice, integrity and most of all confidence,” Dr. Ali said.

He also briefly spoke on the background of the five persons appointed to the IC.

Gajraj, the Chairperson, has 28 years of ongoing experience in service as the Corporate Secretary of the Demerara Bank, 50 years as the Managing Director of Trust Company Limited and is the General Secretary of the Guyana Hindu Dharmic Sabha.

The President referred to Dr. Thomas as an “outstanding product of our legal profession” given her background as head of the Department of Law at the University of Guyana, a former Solicitor General and former Magistrate.

A former school teacher, former engineering technician and former assistant civil engineer, Haniff was noted for his service as an Imam in New Amsterdam since 1988.

Tiwari was noted for being an entrepreneur, a social activist and religious leader, who is also a chartered accountant accredited by the Association of Chartered Certified Accountant (ACCA).

Bowman is a social activist and religious personality. He is a former national Chairman of the General Assembly Church of God and Associate Pastor of the Plaisance Church of God.

The Integrity Commission is one component of government which helps in the pursuit of honesty and transparency; it is the body that examines the asset statements of public officers in an attempt to maintain transparency and accountability in the public sector.

The previous IC board expired on February 21, 2021, while the tenure of the previous PSC board members came to an end in August 2021. The PSC is the constitutional body responsible for the appointment of, and disciplinary action against police officers above the rank of Inspector.