Kaieteur News – Guyana will need to be skillful with the management of its oil sector as developing the resource is coming within a limited window resulting from the world’s fast pace to renewables to combat climate change. Compounding this dilemma is the fact that the country is a newbie in a capital intensive industry and must depend heavily on outsiders to finance and develop this massive sector. 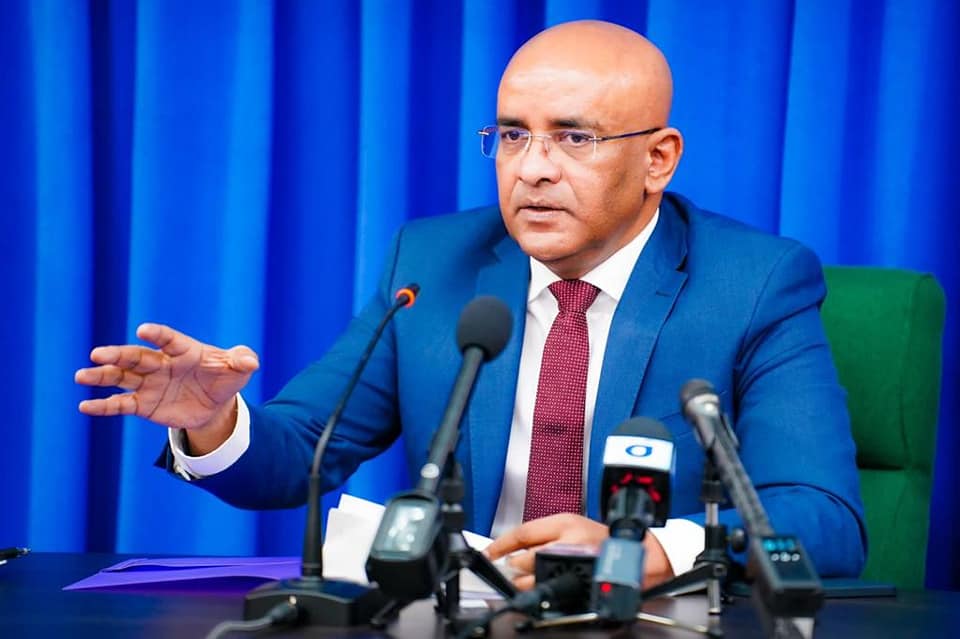 Guyana’s lead official on Oil and Gas, Vice President Bharrat Jagdeo said government will decide on a NOC in September

One way that the country intends to do this is by having a foreign “strategic partner” develop and manage a National Oil Company (NOC) with Guyana having passive ownership of shares. What this means Vice President (VP) Bharrat Jagdeo said is that, “…we are taking a share of the company but we have no control over operations or management except for the controls given to shareholders through passive ownership by virtue of owning shares.”
While the government is said to decide on that avenue by September, it is also set to make its maiden bid round which will include relinquished potions of oil blocks. VP Jagdeo had noted, however, that whoever wins oil blocks and is given the go ahead for a NOC must have “deep pockets” as well as experience in exploring deepwater basins. Whoever comes forward must have the understanding that “…should they come to the table, they would need to have deep pockets because if you have an operator who comes to the table and takes losses and can’t raise money, then you will have a slowdown in activity. So, we have to choose a partner along those lines.”
International Energy Analyst, Arthur Deakin has added, however, that government should also choose a partner that will be able to develop a flexible NOC to handle the globally changing sector. Deakin, who Co-Directs Energy at the Americas Market Intelligence (AMI) advised that Guyana may need to take some time and first develop a completely new type of NOC that caters to the global transition of energy.
Given the fossil fuel transition in as little as 28 years, Deakin posited that the only way he saw an NOC making sense at this time for Guyana is if it is set to look beyond oil. The analyst indicated that the country is looking at Liquefied natural gas (LNG) which will be important for the country in the near future, “…but it must look forward to diversify beyond those toward cleaner fields like biofuels, non-conventional renewable energy, solar and wind, looking at developing the mid stream and downstream infrastructure to get cleaner energy to consumers across the region.”
“So, the only way this would make sense, and this would be more for 2025, is to create a NOC that is much more diversified beyond oil,” he said.
Environmental lawyer, Melinda Janki had mentioned the massive change in the global oil and gas business, and noted that Guyana should be reassessing how it proposes to treat various aspects of the local industry. She said that there have been reports of intergovernmental panel on climate change warning that oil and gas must end, and the international energy agency saying no new oil and gas development. “So, we have the scientist saying one thing , we have the international energy agency saying almost exactly the same thing as well as the United Nations Secretary General saying that any government starting oil and gas is madness and morally irresponsible.”
Experts, including the International Monetary Fund (IMF), have urged the government that a NOC would not bring greater returns to the nation. They advised that government instead improve its stake in the production sharing agreement given the variables that come with developing and managing such an enterprise.
Various factors have contributed heavily to high oil prices which producers currently enjoy. But this may not remain the same. Oil developers and operators may face significant challenges in the future, Institute for Energy Economics and Financial Analysis (IEEFA) analyst, Tom Sanzillo had said. He highlighted that the oil market is volatile and usually persists based on certain factors. He said for now, the increased oil prices appears pleasant for distributors of the resource. “But the markets don’t look like they will be that strong for very long.”
For Guyana, he said the only way the current oil operator, ExxonMobil, is making a sizeable profit “is by maintaining the one-sided contract it currently has with Guyana…that probably won’t stand up against market forces.”