A Region Six (East Berbice-Corentyne) man who was found guilty of manslaughter was sentenced to 17 years in prison on Tuesday by Justice Simone Morris-Ramlall at the Berbice High Court. 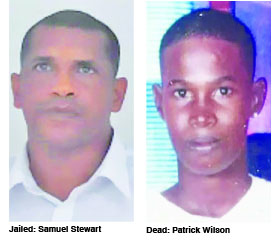 Following a jury trial last month, Samuel Stewart, called “Sammy”, 41, who was initially indicted for the capital offence of murder, was found guilty of the lesser count of manslaughter.
The jurors found that he unlawfully killed Patrick Wilson, called “Boy”, 25, of Limlair Village, Corentyne on June 16, 2019. Attorney-at-Law Charlyn Artiga represented Stewart.
It was previously reported that Stewart walked into a rum shop where the now dead man, his brother, and a cousin were imbibing. Soon after an argument ensued between Stewart and Wilson’s cousin which led to a physical altercation between them.
According to reports, Wilson armed himself with a piece of stick which he used to assault Stewart, who, in turn, stabbed him with a knife he retrieved from the waistband of his pants. As the men were leaving the rum shop, Wilson collapsed on the road; he was rushed to the hospital where he was pronounced dead.