Following a meeting with several cattle farmers from Black Bush Polder on the Corentyne Coast in Region Six (East Berbice-Corentyne), Agriculture Minister Zulfikar Mustapha disclosed that works will soon commence to minimise flooding in the Cookrite Savannah.
During a meeting on Friday with Vice President Bharrat Jagdeo in Number 63 Village, Corentyne, cattle farmers complained about flooding and expressed fears of losing their animals owing to flooded pastures in the savannahs.
According to the Department of Public Information (DPI), Minister Mustapha on Saturday called an emergency meeting with cattle farmers who have herds in the Cookrite Savannah to discuss emergency works that can be done to bring relief and minimise flooding in the area.
Farmers present were invited to make suggestions on how the savannah could be drained without causing flooding in the farming and housing areas. After consulting with the farmers, engineers from the National Drainage and Irrigation Authority (NDIA), and officials from the Guyana Livestock Development Authority (GLDA), Minister Mustapha said that several controlled drainage structures would soon be strategically installed to drain the lands.
“The mechanism will have to be a controlled system, but we cannot allow it to operate on a 24-hour basis. We will put a control drainage structure in the GuySuCo system at Port Mourant, one in the Mibicuri system, one in the Lesbeholden system, and one in Letter Kenny. These are going to be temporary structures. If we are going to have controlled structures set up, we have to ensure systems are in place to monitor them so that we don’t put stress on the drainage system, because if there is a heavy downpour we’ll have flooding in the housing area and we don’t want that to happen,” the Minister said. 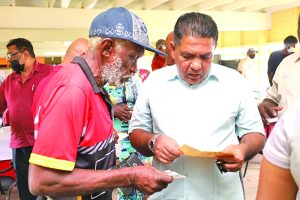 Minister Mustapha also said following last year’s floods, the NDIA had commenced infrastructural works in the Cookrite Savannah.
“I know we have some work planned for the Cookrite Savannah. We already started some work there. A machine was in there, but the rain fell and the area is once again flooded, so those works had to be put on hold. As soon as the water drops, we will continue those works,” the Minister explained.
He also spoke about the ongoing conflict between rice and cattle farmers and cautioned the cattle farmers to ensure they put systems in place to keep their cattle out of the farming areas. He told the gathering that rice farmers were already complaining about cattle being in their fields and destroying their crops.
“Some farmers have already moved their cattle out of the Cookrite Savannahs. Farmers have already been complaining that cattle are eating out the rice and other cash crops. We have to work together. The GLDA has been working with farmers to supply wire and posts to develop fencing for cattle to prevent them from going into people’s farms,” Minister Mustapha said.
Engineers from the NDIA, along with farmers and representatives from the Water Users’ Association, are scheduled to visit the suggested areas over the next three days to conduct an assessment after which works are expected to commence immediately to bring relief to the farmers.