By Kiana Wilburg and Davina Bagot in T&T

Kaieteur News – As Guyana maintains its loyalty to the sanctity of the 2016 Production Sharing Agreement that secures a meagre two percent royalty from ExxonMobil Guyana and its partners, its CARICOM sister, Trinidad and Tobago (T&T) is moving in an entirely different direction. Like the USA, Canada and the United Kingdom, which all increased their royalty rates and slapped companies with a windfall tax, T&T has announced that it will be pursuing a comprehensive review of its oil and gas tax regime. 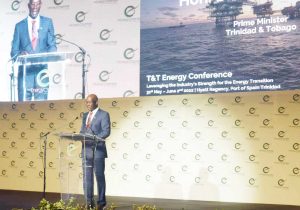 During his featured presentation at Tuesday’s opening of the Trinidad and Tobago Energy Conference being held at the Hyatt Hotel from May 31 to June 2, 2022, Prime Minister, Dr. Keith Rowley categorically stated that he will be going after better petroleum profits tax, supplemental petroleum tax and better royalty rates, which will be applied to all onshore, shallow water and deepwater projects.
Expounding on this latest development, he said, “Unrealised potential is of no value to anyone, not to the resource owners that are the people of Trinidad and Tobago or to interested investors if that resource remains out of reach, undeveloped or unexploited. Accordingly, Government has been in dialogue with upstream companies to expedite Final Investment Decision for known reserves.”
Dr. Rowley continued, “As regards potential and undeveloped resources, the Government has been soliciting proposals from upstream operators on the incentives required to stimulate activity for the exploitation of these resources.”
To that end, the politician said the Ministry of Finance in collaboration with the Ministry of Energy and Energy Industries, is conducting a comprehensive review of the country’s oil and gas taxation regime to ensure Trinidad and Tobago “remains an internationally competitive hydrocarbon province.”
The politician said the review encompasses capital allowances, petroleum profits tax, supplemental petroleum tax and royalty, both onshore and offshore, in shallow water and deep-water.
In addition to this, he said, “As we move to identify new resources, we have to manage available resources. Management of our hydrocarbon resources has not been without challenges. A combination of COVID-19, low commodity prices and technical issues have setback levels of both oil and gas production. However, with the ease in the pandemic and new activity, both oil and gas production are set to rise.”
With new production coming on stream in 2022 and 2023, Dr. Rowley said gas production is projected to increase from present levels to 3.2 trillion cubic feet by 2024. Furthermore, the Prime Minister said gas supply between 2024 and 2027 will be tight before improving in 2028 with the coming on stream of mega projects, such as the Manatee and Calypso.
The PM was keen to note, however, that the key to a sustained gas industry will be the exploration and development of hydrocarbon resources as well as access to cross-border natural gas resources.
With the foregoing in mind, the Prime Minister told delegates in attendance that the outlook for oil production is promising.