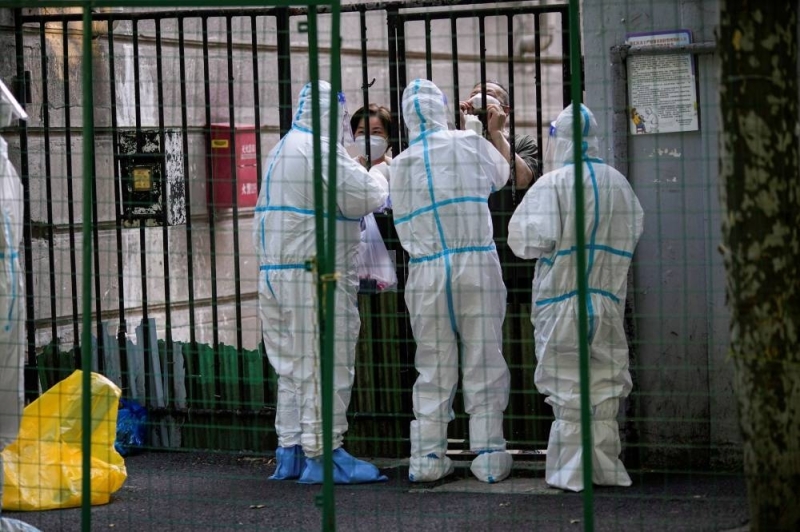 A resident gets tested for Covid-19 behind barriers of a sealed area in Shanghai, China June 8, 2022.— Reuters pic

Minhang, home to more than two million people, will conduct nucleic acid tests for all residents on June 11, and restrictions will be lifted once the testing is completed, the government said on its WeChat account.

Shanghai reported four new confirmed symptomatic Covid-19 cases on Wednesday, all in zones already under quarantine. None of the new cases were in Minhang district.

Shanghai emerged from a two-month city-wide lockdown last week, but some residential compounds have been sealed off again as authorities continue to pursue a “dynamic zero-Covid” policy aimed at shutting down transmission chains as soon as possible.

Several street-level government authorities have issued notices saying residents will be subject to two days of confinement and another 12 days of rigorous testing starting from Thursday.

According to notices from at least three neighbourhoods in Shanghai, residents will be subject to five rounds of compulsory tests ending on June 23, and will be kept indoors until Saturday.

Zhao Dandan, the vice-head of Shanghai’s health commission, told a briefing on Tuesday that the city would continue to implement restrictions even in areas that had not been identified as “high risk”.

“Based on the assessment of the epidemic prevention and control trends, related measures will be adjusted dynamically,” he said. “We hope the public will continue to understand and cooperate.”

The restrictions have triggered protests among residents, and business groups have also said the ongoing preoccupation with “zero-Covid” could lead foreign companies to reconsider their presence in Shanghai.

“One of the major issues facing foreign business is the level of uncertainty surrounding Covid-19 restrictions,” said Alexandra Hirst, senior policy analyst with the British Chamber of Commerce in China.

“This unpredictability, and increased risk, is resulting in many businesses delaying, reducing or withdrawing entirely from the Chinese market,” she said. — Reuters