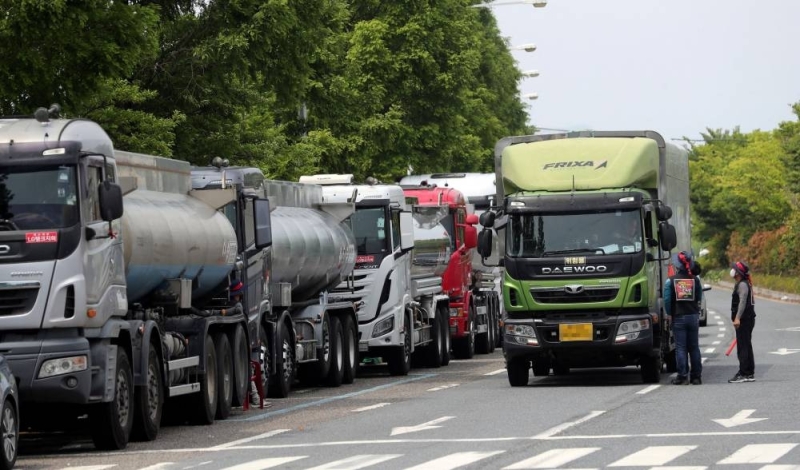 Members of the Cargo Truckers Solidarity union stop a truck during a strike in Yeosu, South Korea, June 9, 2022. ― Reuters pic

SEOUL, June 12 ― South Korean truckers were on strike for a sixth day on Sunday after talks with the government failed to make progress over their demands for higher pay, crippling cargo transport at the country’s industrial hubs and major ports.

Transport ministry officials met for more than 10 hours with union leaders on Saturday for a third round of negotiations, urging them to return to work, but the two sides failed to narrow their differences, the ministry said.

A union official said he did not know whether talks would continue. The ministry said it will continue to hold talks with the union, without elaborating.

As ports worldwide struggle with supply bottlenecks, slowdowns in chips, petrochemicals and autos threaten South Korea’s mainstay exports, and consumer inflation in Asia’s fourth-biggest economy is at a 14-year high.

Protesting against soaring fuel prices and demanding minimum pay guarantees, some 100 unionised truckers gathered on Sunday at the main gate of an enormous Hyundai Motor 005380.KS factory complex in the southern city of Ulsan, a union official said. Hundreds more were expected to join on Monday, he said.

The truckers demand an extension of subsidies, set to expire this year, that guarantee minimum wages as fuel prices rise.

The Ministry of Land, Infrastructure and Transport said it responded to the union by explaining “that ship owners, the party of interest, demand the current Safe Trucking Freight Rates System be abolished”.

About 40 people have been arrested in the strike, some of them later released. The actions have been largely peaceful, though tense at some locations.

Some 6,600 truckers, or 30 per cent of the Cargo Truckers Solidarity union members, were on strike on Saturday, the ministry said, halting trucking activities at petrochemical complexes in Ulsan and slowing steel product deliveries for steelmaking giant.

The union says the number of strikers was higher, without specifying a number, and that non-union truckers were also choosing not to work.

Container traffic at Busan port, which accounts for 80 per cent of the nation’s total, had plunged by two-thirds from normal levels on Friday, a government official said.

At Incheon port it has fallen 80 per cent, while at the port for Ulsan, the industrial hub where much of the strike action has occurred, container traffic has been halted since Tuesday. ― Reuters