Baarack from the brink: Wild sheep rescued in Australia shorn of 35 kg fleece 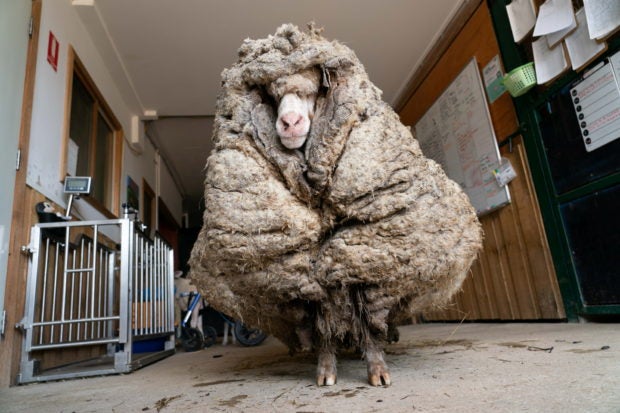 Sheep Baarack is seen before his thick wool was shorn in Lancefield, Victoria, Australia February 5, 2021. Edgar’s Mission Inc/Handout via REUTERS

SINGAPORE —  A wild and ailing sheep found in a forest in Australia, named Baarack by rescuers, has yielded a fleece weighing more than 35 kilograms – nearly half the weight of an adult kangaroo – after being shorn for the first time in many a year.

The sheep was found by a member of the public who contacted the Edgar’s Mission Farm Sanctuary near Lancefield, Victoria, about 60 kilometers north of Melbourne, according to the Mission’s Kyle Behrend.

“It would appear Baarack was once an owned sheep,” said Behrend, “he had at one time been ear-tagged, however these appear to have been torn out by the thick matted fleece around his face.

“Sheep need to be shorn at least annually otherwise the fleece continues to grow and grow, as happened here,” said Behrend. After his much-needed shearing, Behrend said Baarack’s fleece weighed in at 35.4 kilograms.

“Whilst his hooves were in great condition from running over the rocks in the forest, he was in a bit of a bad way. He was underweight, and due to all of the wool around his face he could barely see.”

Baarack is now settling in with other rescued sheep at Edgar’s Mission, Behrend said, adding it “all goes to show what incredibly resilient and brave animals sheep really are and we could not love them any more if we tried.

Ibra will be torn between matches and the festival in Sanremo for a week. 4 musical evenings and 2 matches in 6 days
The champion of China, Jiangsu Sunding, announced the termination of its activities. Inter is owned by the same company
Ex-goalkeeper of the national team of Argentina Cavaliero killed a man
Schalke has sacked head coach Gross and the sports director. The team is last in the Bundesliga
Werner on Chelsea: The period when I didn't score was the worst of my career
Ole Gunnar Solskjaer: You're in the wrong place if you're at Manchester United and you like to lose. I may be the worst loser in the club
Ko vid-masks of the Leopard are recognized as the best in Spain. Efficiency - 94%
Source https://newsinfo.inquirer.net/1399582/baarack-from-the-brink-wild-sheep-rescued-in-australia-shorn-of-35-kg-fleece

Duterte says he is reconsidering to place Metro Manila under MGCQ

‘Spirited Away’ to be adapted for the stage

US Soccer scraps ‘no kneel’ anthem policy after vote

Chai Fonacier to star in film opposite Eva Green

LGUs should be consulted on easing health protocols — Robredo

McIlroy, Thomas to dress in red and black in honor of Woods

Only 180 Tala Hospital staff willing to have Sinovac jab

Jazz rebound with win over Magic