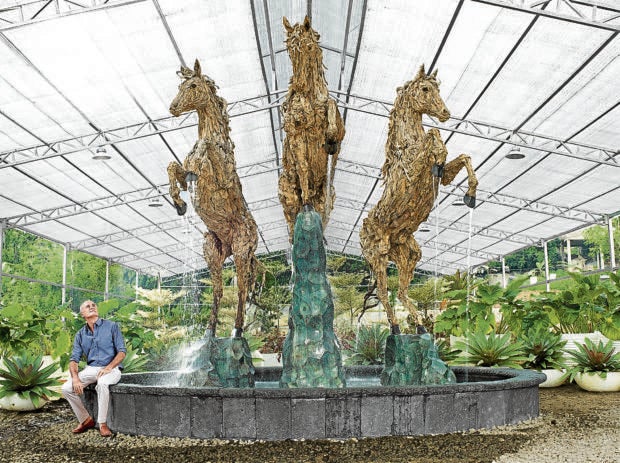 British sculptor James Doran-Webb, Cebu’s adopted son, sits beside the centerpiece for his display
at the upcoming Chelsea Flower Show. The Renaissance-inspired “Coming of Age of the Infants
of Poseidon” tells the story of Poseidon’s three offspring emerging from their aquatic habitat to
confront the world. Photo taken at landscape designer Jaime Chua’s place in Mandaue

On a modest 60-square-meter space near the entry, Cebu-based British sculptor James Doran-Webb made his debut as an exhibitor at the 2012 Chelsea Flower Show.

Instead of going straight to the floral displays, she spent a few minutes admiring Doran-Webb’s sculpted animals from his Mandaue workshop, while her lady-in-waiting whispered, “That’s the chap I was telling you about. He works in the Philippines.”

When the in-person Chelsea Flower Show in London reboots on Sept. 21-26, Doran-Webb will hold his largest and most ambitious garden display ever—a 120-sq m interpretation of a Renaissance garden in Tuscany, Italy. All the hardscapes and sculptures are made in Cebu.

The 108-year-old RHS Chelsea Garden Show is touted as the world’s most spectacular flower show. Held on the grounds of the Royal Hospital Chelsea, the nursing home for veterans, it is famous for the unexpected engineering marvels in garden design and hundreds of displays from the world’s top nurseries and growers. The event is graced by the British royal family and supported by multinationals. 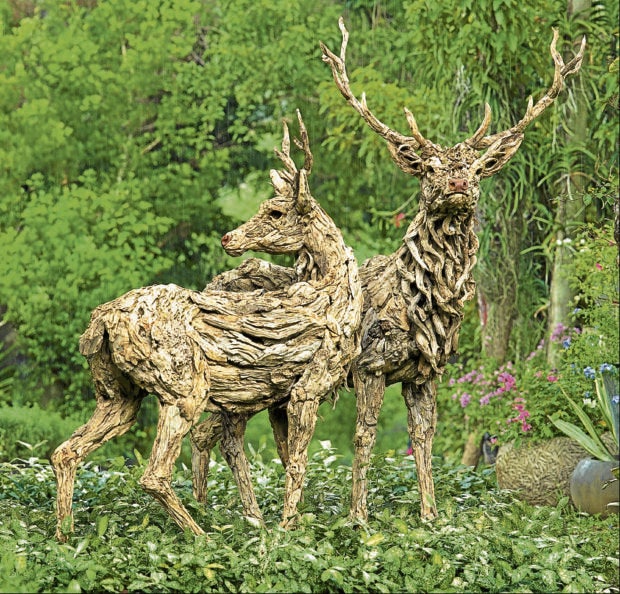 Unlike Doran-Webb’s previous displays of driftwood animals roaming amid a wild English garden, the upcoming exhibit will feature a formal setting.

Fragrant jasmine creepers, cultivated by an Italian grower, will fill the 5-meter backdrop and trellises. Each of the six arches, inspired by the Spanish churches in Cebu, will feature an alcove with a trompe l’oeil of a Tuscan landscape, and a sculpture of a saint.

Paying homage to the classical antiquity of the Italian Renaissance, the sculptor names the centerpiece of three horses arising from the water as “The Coming of Age of the Infants of Poseidon.”

Doran-Webb explains, “Poseidon was the god of the sea and of horses. These animals are his children coming out from their habitat to a new environment. It’s an imagery of us emerging from the post-COVID world into the ‘new normal.’”

The adjacent Temple of Ceres, the Goddess of Nature, is a gazebo with a Romanesque mosaic flooring and structural posts made up of gnarly tree trunks, held up by recycled steel reinforcements. Its dome is covered with greenery and sculptures of owls and eagles.

Philippine Ambassador to the Court of St. James’ Antonio Lagdameo will attend the opening of Doran-Webb’s exhibit.

The Mandaue-based James Doran-Webb Studio is the only Philippine company that has represented at the Chelsea Flower Show. A resident since 1989, Doran-Webb runs an export company, Cebu Home Crafts, and his namesake sculpture studio, both of which use long dead hardwood, recycled steel and iron, and scraps.

A self-taught sculptor and designer, he works with highly skilled welders to create organic but sturdy sculptures. To compensate for the wood in his pieces, he has been planting tree seedlings with a target of 80,000. 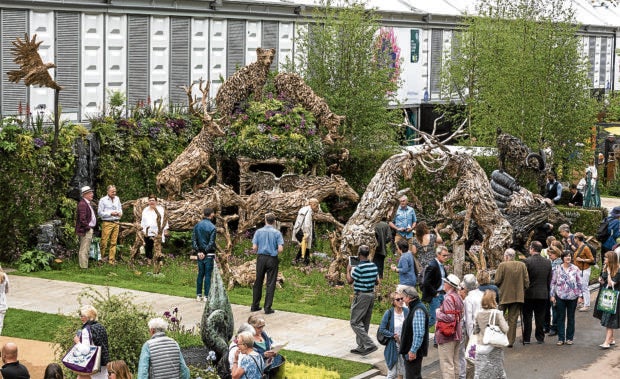 By a stroke of luck, Doran-Webb recalls that he easily got a slot at the 2012 Chelsea Flower Show. When his mother pitched her son to the organizers, they said the waiting list for exhibitors ran for seven years. But when they saw Doran-Webb’s exquisite driftwood sculptures, they gave him a prime location near the arrival area.

Prominent sculptor David Goode, a mainstay at the Chelsea Flower Show, bought the “Rutting Stags” before the opening. He warned Doran-Webb that from his experience, the royal family tended to ignore the exhibits and went to the garden shows. At the launch, Goode was flushed when he saw Queen Elizabeth stopping in front of Doran-Webb’s sculptures.

In the 2014 Chelsea Flower Show, Prince Philip stepped down from the stretch limousine to appreciate the sculpture of two fighting stallions in driftwood amid a wild setting of British flowers. He told the sculptor’s mother, “By jove, what incredible beasts!”

Doran-Webb won the Best Tradestand Award in 2013 and 2017. Against a background wall of carpet recycled to mimic sandstone, the 2013 exhibit highlighted a menagerie of driftwood animals. Three lionesses dallied by the tree while two horses galloped in the background and an eagle flew atop a gazebo that was built from deadwood and tiles from recycled scraps.

“I was the first winning trade stand that didn’t have a single flower,” he recalls. Over the years, Doran-Webb has since been going agog with flowers.

Prince Philip yet again marveled at the 2017 exhibit, which also won an award. A monarch stag stood proudly atop a promontory while two rutting stags jostled on the ground. It became more alive with two grizzly bears that climbed atop the mini temple and a golden eagle in flight. Against a waterfall, a driftwood salmon jumped out of the stream while horses ran across the water producing special sound effects. A first in the history of the Chelsea Flower Show, his entry won based on the judges’ unanimous decision. 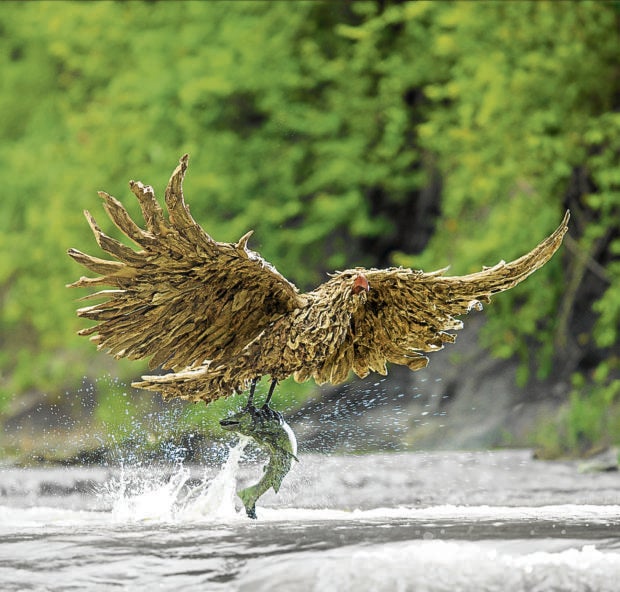 “Dinner.” A golden eagle grips a salmon. Age-old wood attached to a stainless-steel armature. Salmon made from stainless steel

Doran-Webb says it takes a year for him to prepare for the Chelsea Flower Show and the total cost from the construction to egress of the exhibition in London can go over $400,000. The setup and planting alone costs at least $150,000. People exhibit to gain media mileage or prestige, meet new clients and hopefully, catch the attention of the royals.

“Many people would tell me, ‘You are the reason we come to Chelsea to see what madcap things you’ve made this year,’” he says.

When the world went on a lockdown last March 2020, Doran-Webb thought he was going to file for bankruptcy. The Chelsea Flower Show, which was traditionally held in May, was canceled, leaving him with several sculptures.

With businesses shut down and no revenues, he applied for a Bounce Back Loan Scheme from the British government. This gave small companies access to finance during the pandemic. 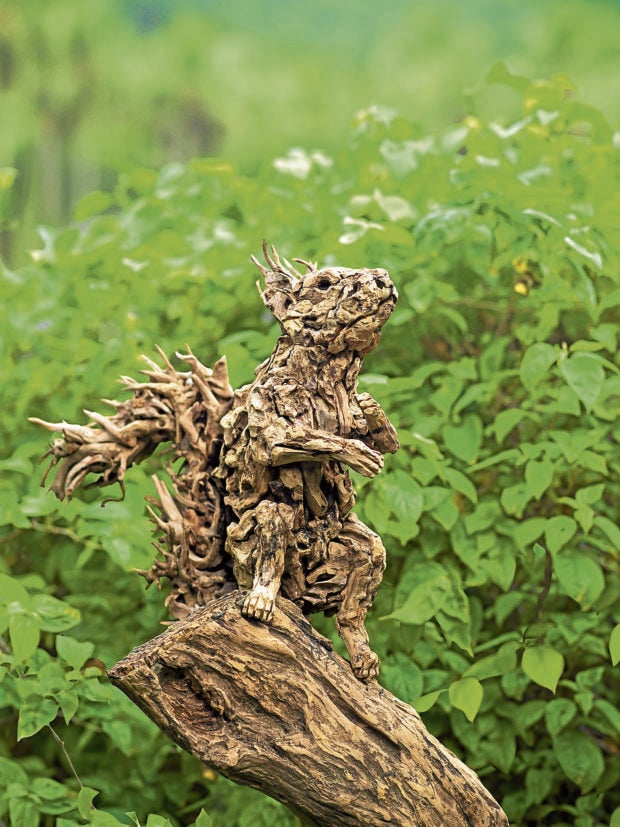 “Curiosity.” A squirrel stands atop a fallen post made of “travesia”

Doran-Webb was also fortunate to have foreign clients order from him. One of them paid in advance for five sculptures. Last September, he organized an exhibit at a golf course outside of London. The income from that show was able to support his companies until June this year.

“The pandemic taught me not to put all my eggs in the Chelsea basket,” he rues.

Before the Chelsea Flower Show reopens in the fall, Doran-Webb will hold exhibit-sales in the affluent community of Jersey, and a golf course in North England.

“I’m hedging my bets. In case something happens [to the Chelsea Flower Show], I won’t find myself out in the open with no cash flow. I can continue with my workshops. All that matters is we survive.”

Pinay boxer mauls Kenyan rival, advances to Round of 16

10 Steamy K-Dramas to Watch, According to How Much You Shouldn't Watch Them With the Family

Willie Revillame Avoids Interview About His Possible Political Plan In 2022

This Aesthetic Game Is Like Leafing Through an Illustrated Storybook

Alessandra Hospital 3 Times Allegedly Due to Stress After “My Amanda”

Kiefer Ravena gets OK to play in Japan B.League