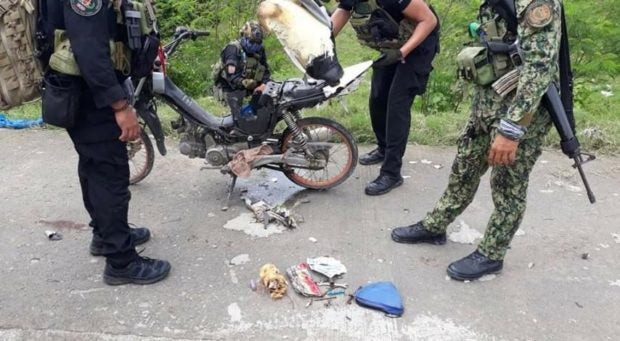 SEIZED. Maguindanao police personnel examine the improvised bomb-laden in a motorbike driven by a suspected member of the BIFF. Police seized the bomb at a checkpoint in Datu Saudi Ampatuan town on July 3. (PNP Photo)

COTABATO CITY, Maguindanao, Philippines — Police and military personnel blocked on Friday the transport of an improvised bomb by a suspected member of the Islamic State-linked Bangsamoro Islamic Freedom Fighters (BIFF) in Maguindanao province.

The courier, identified as Alimudin Unggala, was driving a bomb-laden motorcycle in Datu Saudi Ampatuan town when he was flagged down at a joint police and Army checkpoint in Barangay Madia on Friday afternoon.

When searched, the soldiers and police officers discovered the improvised bomb with a mobile phone as a detonator.

The security forces could not immediately determine where Unggala intended to bring his bomb-laden motorcycle.

But Abu said the alleged bomb courier was undergoing intense questioning by the police.

Abu said they suspect Unggala to be part of a BIFF faction led by a certain Commander Bongos with forces deployed in the Datu Saudi Ampatuan area.

Dybala became the MVP of Serie A-2019/20, Immobile-the best forward
Real Madrid: Casillas will always be a Real Madrid player. The best goalkeeper in the history of Spain
In Spain, complete chaos: Espanyol refuses to fly out of La Liga, Depor and all the others - from Segunda
Ferran Torres passed a medical before transferring to Manchester City and signed a contract until 2025 (Fabrizio Romano)
Emmanuel Adebayor: Mourinho is the best coach in the history of football
Casillas announced his retirement
De Gea has found a double-the coach of Scottish Ross County. In his team, 19% of the players are called Ross – even all the goalkeepers
Source https://newsinfo.inquirer.net/1301937/govt-forces-block-transport-of-biff-bomb-in-maguindanao

Woman, daughter hurt as strong winds uproot acacia, slam it into their house in Cotabato

This Local Jewelry Brand Has a Sailor Moon-Themed Collection

China, WHO in talks on plans to trace coronavirus origin

These Gorgeous Dried Blooms Will Make Your Space IG-Worthy

Palace: No provision in anti-terror law that can regulate social media

Erobotics, a solution for the sexual health and well-being of astronauts