Russia to ban entry of Chinese nationals to halt virus

BERLIN  — Russia will temporarily ban Chinese nationals from entering the country due to the virus outbreak centered in China that has infected more than 73,000 people worldwide, Russian authorities said Tuesday. 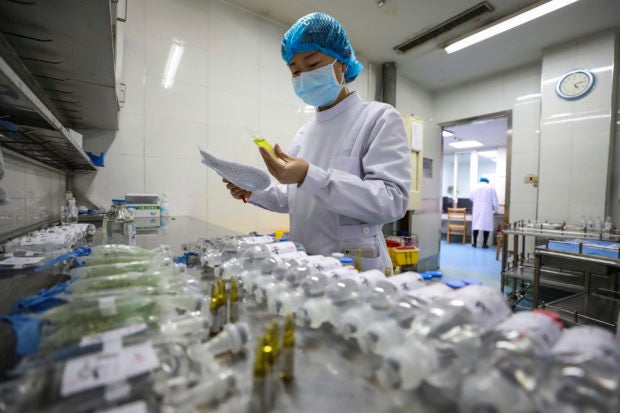 In this Sunday, Feb. 16, 2020, photo, a nurse prepares medicines for patients at Jinyintan Hospital designated for new coronavirus infected patients, in Wuhan in central China’s Hubei province. China reported thousands new virus cases and more deaths in its update Tuesday, Feb. 18, 2020 on a disease outbreak that has caused milder illness in most people, an assessment that promoted guarded optimism from global health authorities. (Chinatopix via AP)

The entry ban goes into effect Thursday at midnight Moscow time (2100 GMT) for an indefinite period, according to a decree signed by Russian Prime Minister Mikhail Mishustin. The government said it took the move due to the “worsening epidemiological situation” in China.

Russia already had cut off most Chinese visitors by closing the long land border with China and Mongolia and imposing other travel restrictions. The new entry ban won’t affect travelers who need to transfer flights at Russian airports, authorities said.

So far, Russia has had only three confirmed cases of the COVID-19 disease caused by the virus — two Chinese citizens who were treated and released, and a Russian national infected on the Diamond Princess cruise ship now quarantined in Japan.

However, Russian authorities have taken significant steps to try to keep the virus from spreading, including hospitalizing hundreds of people as a precaution after they returned from China.

Russia halted most air traffic to China, suspended all trains to China and North Korea, and temporarily stopped issuing work visas to Chinese citizens. Chinese students studying in Russia were told not to return until March 1.

Earlier this month, the prime minister said Russia might start deporting the foreigners infected with the virus.

In the meantime, Germany is sending a second shipment of medical aid supplies to China to help the Asian giant fight the coronavirus epidemic.

“Germany stands firmly on the side of China in the battle against coronavirus and works closely and trustfully with the Chinese officials,” Maas said. “We have the utmost respect for the efforts China has already undertaken.”

The virus, which emerged in central China in December, has killed 1,868 patients in mainland China and five others elsewhere. The World Health Organization has named the illness COVID-19.

C hina has instituted a strict lockdown on over 60 million people in central Hubei province and other nations are taking their own measures — including mandatory 14-day quarantines — to stop the virus from getting established on their territory.

Europe has had one virus death among its 47 confirmed cases, an 80-year-old Chinese tourist in Paris who was initially turned away by two French hospitals.

Italy says 14 of 25 Italian crew members aboard the troubled Diamond Princess cruise ship, which has been struck under quarantine in Japan, will take an Italian evacuation military flight home. The other 11, including the captain of the ship, will stay, the Italian Foreign Ministry said. No date for the Italian air force plane’s departure for Japan has been decided yet.

The Russian Embassy in Japan announced Tuesday that one Russian was among the 542 people on the Diamond Princess confirmed with the virus. The statement clarified earlier reports about two Russians getting infected.

On Monday, a Russian court sent a woman who broke out of a locked hospital during a 14-day isolation period back into quarantine. Russian health authorities are suing others who have defied quarantine requirements.

For more information about the novel coronavirus click here.

Explainer: How an old tuberculosis vaccine might help fight the new coronavirus

Iza Calzado on surviving the coronavirus: 'I am alive and for that I am truly grateful'

4 Countries Record Over 100,000 Cases of Coronavirus

DSWD Orders LGUs To Identify Who Will Receive Cash Aid

Iza Calzado On Controversial COVID-19 Remark After She Has Recovered

DFA Confirms 322 Filipino Seafarers From Italy Arrive in the Philippines

Locsin sharing 75% of monthly pay with ‘no work, no pay’ DFA personnel

'Walang maiiwan': Manila to give P1,000 to families under coronavirus lockdown

10 Classic White Sneakers That Will Never Go Out of Style

Glimmer of hope in virus-hit Europe as U.S. girds for 'hardest' week

Queen delivers message of hope to UK amid virus outbreak

Americans brace for ‘hardest, saddest’ week of their lives

Trump warns US of ‘really bad numbers’ in virus cases

Aquino all for wards getting opportunities overseas

[OPINION] Can we beat the coronavirus with ‘discipline’?

Seeing the glass half full

Why Tony feels pressured ‘all the time’ during kissing scenes

Page Turners: What the editors are reading this April