Squeezing profit out of fruit juice

From its product, process, purpose and branding, local juice manufacturer Natu­real is as authentic a business as they come—which came to be because of a couple of “avid fans” of freshly squeezed calamansi (Philippine lime) juice.

“Natureal Juice was a happy accident; it was actually my parents’ idea,” says Alyssa Karin Pang, who manages Natureal’s marketing under her family’s almost 70-year-old business, Glory Foods Corp. “My parents are avid fans of homemade, freshly squeezed calamansi juice, [and] they noticed the lack of authentically fresh fruit juice in mainstream channels. If you wanted the refreshing taste of the real thing, you would either have to squeeze and mix it yourself, or settle for bottles of heat-pasteurized calamansi juice (which may or may not have artificial colors, flavors or preservatives)—which are not bad, by the way, but just different. It was then that they realized that there must be a market for such products—especially with the upswing in consumer demand for real and fresh products.” 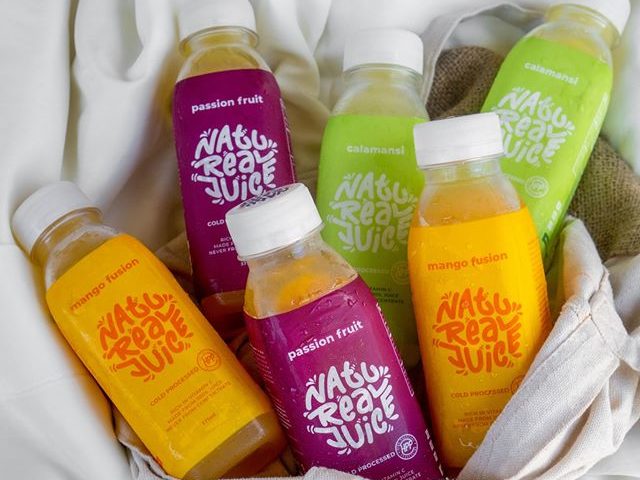 Natureal juices are not like the others as they are a product of a different production process.

Natureal Juice sells three flavors: calamansi, mango fusion and passion fruit. In Davao, where the enterprise is based, two additional, seasonal flavors are also available (green mango and watermelon), and less-sugar variants of the three other flavors. Aware of their competition, and how their product isn’t exactly the most novel, Pang says Natureal Juice’s value proposition is its commitment to providing a product that’s 100-percent natural, using “real fresh fruit ingredients, without any artificial colors, flavors or preservatives.”

Pang adds: “Yes, you may argue that there are already quite a lot of other juice pro­ducts out there that offer this as well, but what makes us especially different is how we process our products.”

This process, she explains further, is called high pressure pasteurization (HPP). Usually, fruit juice manufacturers, in order to offer juices made from real fruits without preservatives, need to either come up with a product with a short shelf life (around seven to 10 days even while refrigerated), or go with a heat-pasteurized product.

While the purpose of heat pasteurization is to kill any microbes or bacteria present, it essentially “cooks” the pro­duct, “a process which not only changes the color and taste of the juice, but essentially takes out the nutritional content it has,” Pang says.

With HPP, however, juices need not be subjected to high heat to kill microbes or bacteria, she says. To address the issue of food safety, the juices, in their final packaging, are instead subjected to extremely high pressure, which effectively does what heat pasteurization can, without changing the juices’ color, taste and nutritional content. 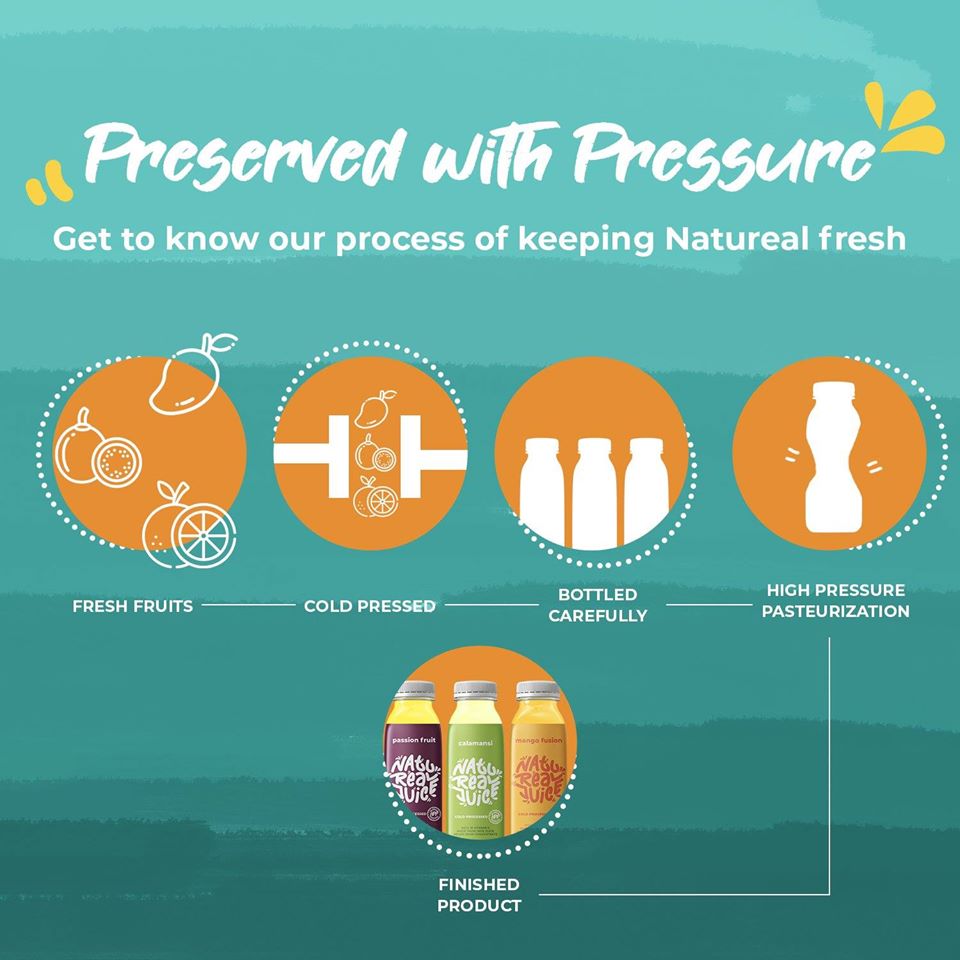 Moreover, Natureal is able to extend their products’ shelf life to 90 days when kept refri­gerated.

While Natureal Juice is part of Pang’s family’s enterprise, which her grandfather established in 1952, this isn’t her first business venture.

As an undergrad at the Ateneo de Manila University, Pang, along with five other classmates, created Tidy Heidi, an instant stain remover (she has a degree in Management in Applied Chemistry), as their thesis—and that product is still alive and well, and selling.

After graduating in 2016, Pang decided to try employment first at a local marketing consultancy company, where she was able to work with brands such as Wyeth Promil, Rebisco, Nissan and Macallan.

Equipped with her professional experience, Pang eventually joined her family’s business, taking Natureal Juice under her wing. She also serves as marketing manager for Allegro Ice Cream, a brand which Glory Foods started in 2006, after years of selling their flagship product: ice cream cones.

“We inevitably went into the ice cream business here, [and] we mainly stuck to the Davao market, offering our ice cream products for restaurants to carry in their dessert menu,” says Pang.

Natureal, however, has a wider reach. After seeing how well the product would sell in weekend bazaars at a local mall, Glory Foods Corp. decided to open their first permanent Natureal kiosk in 2016.

They now have branches in malls across General Santos, Cagayan de Oro and Digos cities, and, just recently, expanded distribution in Metro Manila and Cebu City. In Cebu, Natu­real is available in Island Souvenir Stores and Mactan International Airport food hall. As for Metro Manila, the juices are carried by Rustan’s Marketplace (in Bonifacio Global City; Rockwell, Makati City; and Shangri-La Plaza) and Lord Stow’s Bakery.

The brand had plans to further their expansion in Metro Manila and Cebu, but COVID-19 happened—and as with countless other businesses, Natu­real’s plans had to come to a halt. Even in their home base, Davao City, business had to stop, as their kiosks are all mall-based.

Juice production stopped, too, but as of two weeks ago, has been up and running again.

“During the beginning of the lockdown period, everything was so sudden. We were forced to think of ways to move our product, otherwise we would have a lot of expired stock,” says Pang. To avoid having their products go to waste, she says Natureal decided to donate these to front-liners, which also provided them with the health benefits of the juices, such as Vitamin C.

Even with lockdown measures eased, Pang says they “are definitely still struggling to find creative ways” to recoup sales while ensuring support for their employees.

E-commerce has helped, however, and Pang says they have become more aggressive in pushing for online retail of Natureal Juice. Their products are available on marketplaces such as Karton.Ph, Platinumfoodservice.com and Lazada, as well as the brand’s Facebook page.

One thing’s for sure, though: Despite the challenges posed by the pandemic, Natureal Juice has not lost sight of its expansion goals, especially since consumers are now putting more premium on their health and well-being.

“We’re lucky to be a product that is rich in naturally occurring Vitamin C. Even during the lockdown, especially in grocery stores, we saw a considerable surge in interest in our product. We believe that the interest and consideration of our product among new customers could continue to grow postlockdown,” says Pang. “Aside from this, we also plan on drumming up support for local products. It is really in times like these that we look to our local consumers for support for the local businesses and industries. Because at the end of the day, it’s all about helping each other survive what we all just went through.”

Mata on Manchester United's victory: The team is physically exhausted. It's not our best match, but it's important to win now
Bas Pro 1:2 from Inter: after the opening 20 minutes, Bayer entered the game. I believed that we could do something
Conte on 2:1 with Bayer: When a coach sees such dedication, he is always happy
Sanchez finished the match against Bayer, despite the injury
Solskjaer is the fifth coach with whom Manchester United reached the semi-finals of the European Cup
Manchester United are set to buy Sancho this summer despite Borussia's claim that he is staying
Shirokov beat the judge at an Amateur tournament: promised that # # # # # [vdarit] for a red card-and # # # # # [vdarit]
Source https://business.inquirer.net/301752/squeezing-profit-out-of-fruit-juice