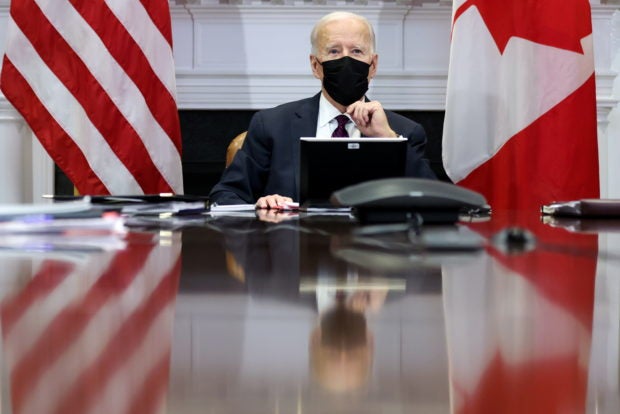 WASHINGTON — U.S. President Joe Biden and Canadian Prime Minister Justin Trudeau sought on Tuesday to turn the page on the Trump era, stressing the countries’ deep ties and pledging to work together on COVID-19 and climate change in their first bilateral meeting.

“The United States has no closer friend, no closer friend than Canada,” Biden told Trudeau via an electronic video link with the Canadian leader and top aides. “That’s why you were my first call as president (and) my first bilateral meeting,” he said. 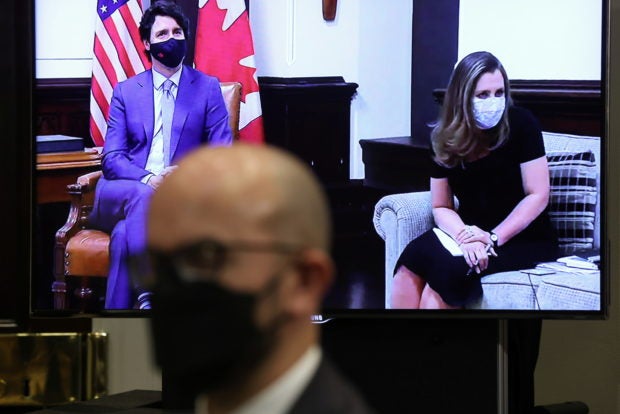 “Thank you, again, for stepping up in such a big way on tackling climate change. U.S. leadership has been sorely missed over the past years,” the Canadian leader said.

Canada has often been a U.S. president’s first foreign stop, but the COVID-19 pandemic turned the sit-down between the two leaders and some of their top deputies into a virtual affair.

Biden, Vice President Kamala Harris and other officials, all wearing dark masks, sat at a long table in a White House meeting room, near a large video screen beaming in Trudeau’s image from Ottawa.

It was not clear the meeting would result in any new deal on issues including Canada’s access to vaccines produced in the United States or a shared standoff with China over the detention of a Huawei executive.

It is expected to yield a shared document outlining cross-government collaboration on a wide range of issues, a senior U.S. administration official told reporters.

But the two leaders made clear they wanted to put the dispute behind them and work together.

A Biden administration official said the U.S. president would raise the topic of the countries’ investment in the North Atlantic Treaty Organization. Trump often disparaged allies for their shortfall in funding the mutual defense organization.

Trudeau was the first world leader to congratulate Biden when the Democrat was declared the winner of the November election, illustrating the degree to which the close U.S. ally looks to move on from Trump’s four years in office.

The Republican former president, who often clashed with traditional allies on trade, imposed tariffs on Canadian aluminum and steel. He traveled only once to Canada for a G7 meeting in 2018, and blasted Trudeau for being “very dishonest and weak” after he left.

An expanded meeting following that was expected to include a broader set of officials. Trudeau was accompanied by his finance minister, Chrystia Freeland, and others. Biden and Trudeau planned to address the public around 5:45 p.m.

The official said the White House expected Trudeau to raise the issue of two Canadians detained by Beijing and charged with espionage after Canada’s detention of Meng Wanzhou, chief financial officer of China’s Huawei Technologies Co Ltd, on a U.S. arrest warrant.

The official said the White House believed the Canadians were unjustly detained and would work to secure their release but added it would not meddle in independent Department of Justice matters. Meng remains under house arrest.

Canada also seeks exemptions to a U.S. effort to ensure federal agencies buy American-produced goods. That could hurt Canada, given how tightly the two nations’ economies are integrated.

Can carpooling be organized like bus routes? France thinks so

Recto: There are 3 times more Pogo workers than reported by Pagcor

This Scenic Bamboo Grove Hides a Restaurant and an Outdoor Cinema

Topshop Puts Everything on Sale Weeks Before Closing

Duterte: China to donate another 400,000 vaccines to PH

Palace: Duterte can choose vaccine brand because ‘he’s the President, over 70 yrs. old’

Factbox: What is the International Criminal Court?

Parts of PH to have rains due to easterlies, amihan — Pagasa

Pasay mayor: Up to IATF to place city on ECQ due to rising COVID-19 cases

To end soon or not to end? ‘Ang Probinsyano’s’ alleged final episode and ABS-CBN’s denial

These Room Fragrances Are Inspired by Luxury Hotels in Manila

PBA Commissioner Willie Marcial to be feted by press corps

Globe ramps up spending to provide care for its customers

Didal is 2020 Asia Skater of the Year

Nepal: How one hotel is providing an excellent example of accessible tourism

How Korean cuisine is rising to capture global food scene