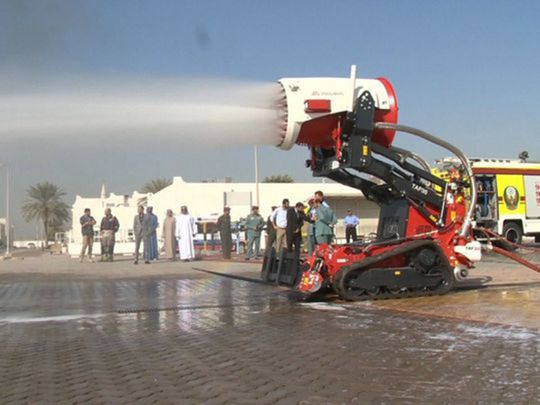 The robot, which will be used in firefighting, has also been employed in sterilisation drives Image Credit: Supplied

Abu Dhabi: The Abu Dhabi Civil Defence has started using a number of robots for firefighting and national stesterilisation purposes during the pandemic in the emirate, according to a senior official from the Civil Defence.

These robots were first brought to the country a few months ago and were experimented at different scenarios of firefighting. Now they have been deployed for the task, the official was quoted as saying in a tweet by Abu Dhabi Police.

Captain Engineer Yousuf Al Kaabi, head of Civil Protection Department, General Administration of Civil Defence in Abu Dhabi, said, “This will help firefighters to protect themselves from direct lines and the robot will help them quickly put out the fire. It would also prevent different kinds of fire-related dangers at the sites.”

“The robots participated in the National Sterilisation Programme and carried out different sterilisation tasks in various localities of Abu Dhabi,” he said.

The use of robots also helps provide better protection, he said.

The robot has a capacity of storing 10,000 litres of water and works very swiftly when it comes to putting out a fire. It works as per international standards.

“The use of robots in firefighting saves time and effort. It ensures the safety of individuals and enhances the completion of tasks with high technology.”

He said in many countries of the world, Artificial Intelligence is used for firefighting purposes and other different reasons.

Juventus are Interested in Jacko
Micah Richards: Arsenal need to keep the Forward. It can attract other top players
York on Keane's criticism of De Gea and Maguire: Roy himself was not perfect when he played. He should be more restrained
Setien on Griezmann: When he plays, I am asked about Fathi, and Vice versa. Antoine is important to Barca
Setien on the situation with Messi: I haven't heard anything from him. Everything else is speculation
Sane did not pose in the number 10 shirt out of respect for Coutinho
Alvaro Morata: Atletico are close to the level of top clubs. We beat the best team in Europe to the Champions League
Source https://gulfnews.com/uae/now-robots-help-with-firefighting-in-abu-dhabi-1.71973220

Free tools and training to help with economic recovery in Europe, the Middle East and Africa

Why does Emirati entrepreneur Sara Al Madani say no to female empowerment & yes to failure?

Why isn't there one unified sign language in the Middle East region?

Combating coronavirus: How much does it cost to hire a private jet to UAE

9 in 10 Employees Say Lack in Data Skills Lead to Greater Challenges at Work, May Be Career Development Roadblock

IATA calls for alternative to quarantine