No home advantage for Everton, as Sheffield U take all 3 points (1-0) 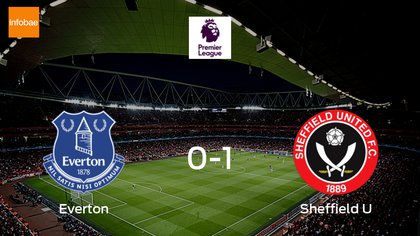 Sheffield United beat Everton with a thumping 1-0 victory on Sunday at Goodison Park. Everton were looking to pick up points, following a 1-0 victory against West Ham United. Sheffield U, on the other hand, lost 2-0 in the last match they played against Crystal Palace. As the table looks today, Everton are in 8th place, with 56 points from 36 matches, while Sheffield U sit in 20th, with 20 points from 36.

Sheffield U started the game well, with Daniel Jebbison finding the net after only 7 minutes, finalising the first half 0-1. Both teams struggled to produce anything meaningful in the second half, leaving the final score at 1-0.

There were bookings for James Rodriguez from Everton, and Chris Basham, George Baldock and Jack Robinson, for Sheffield U.

Everton will play at home against Wolverhampton Wanderers, while Sheffield U will face Newcastle United away.

Tiago about Lewandowski: It's not fair that the Golden Ball was not awarded online
Griezmann about MLS: The contract with Barca is valid until 2024. Then it's time to go to the United States
Tiago Alcantara: I hate modern football. VAR robs the game of adventurism. Referees must make mistakes, as do players
FIFA for homophobic chants of fans punished the national team of Mexico with the closure of the stands and a monetary fine
Afellay on Messi: He often vomited in the toilet right before going on the pitch - so strong was the pressure
Real Madrid likes Pau Torres, but the transfer of the Villarreal defender is more likely in the summer of 2022
Lovren on hitting Chic in the Face: Funny penalty