Vaccines Turn Into Geopolitics in Europe’s Most Volatile Region 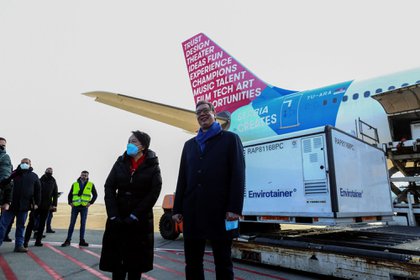 (Bloomberg) -- The coronavirus exposed lingering divisions in the Balkans, and now Europe’s most volatile region is once again cleaving along geopolitical and ethnic lines over efforts to get people vaccinated.

The European Union has pledged to give six prospective members 70 million euros ($85 million) to buy Covid shots, but deliveries are facing delays. That’s empowered Serbian President Aleksandar Vucic to leverage his links with China and traditional ally Russia into pledging vaccine donations to North Macedonia and to the ethnic Serbs in Kosovo and Bosnia-Herzegovina.

The 18 million people who live in the western Balkans have been severely hit by coronavirus, with parts of former Yugoslavia recording among the world’s highest per-capita death rates. The fallout is threatening efforts to resolve lingering border disputes and risks pushing the region further away from the EU’s orbit as Russia and China extend their reach.

Western Europe was already failing a place that’s synonymous with hardship and war, according to Zijad Becirovic, director of the International Institute for Middle East and Balkan Studies in Ljubljana. The U.S., meanwhile, has gradually loosened political ties with the region since intervening in Bosnia and Kosovo conflicts in the 1990s.

Hungary, Serbia’s neighbor to the north, became the first EU nation this week to approve Russia’s vaccine for use. Prime Minister Viktor Orban has been building ties with Moscow while defying the EU over his increasingly autocratic rule. Bosnia, fearing delays, has ordered vaccines from Russia and China, Prime Minister Zoran Tegeltija said on Thursday.

“It wouldn’t be surprising if some countries change their geopolitical orientation in the future exactly because of the ‘stepmother’ treatment by the EU,” said Becirovic. “Over the past decade, the U.S. left the Balkans to the EU, which not only didn’t deal with the Balkans, it barely dealt with itself.”

Vucic said this month he predicted Brussels would be slow to respond, so he started talks on procuring shots from Russia and China, as well as the U.K. and U.S., whose vaccine programs are currently ahead of the EU’s. Serbia has received 1.05 million vaccine shots and has contracts for 6.18 million more.

North Macedonia is expecting to get vaccines from Serbia, as well as from the EU and its own purchases, Prime Minister Zoran Zaev said on Facebook on Jan. 18. Serbia’s offer is “an act of solidarity,” he said.

Yet opponents see Vucic’s action as anything but benevolent, and rather as a way of stoking tensions between ethnicities. In Kosovo, whose existence as a state Serbia refuses to recognize, government officials rebuked the effort to get vaccines to the north of the country where most ethnic Serbs live.

Relations between the two countries remain strained despite years of efforts to mend ties following the war that ended in 1999 when Serb forces were driven out by NATO-led bombing campaign.

This week, Vucic said Serbia will find a way to help Kosovo, regardless of ethnicity. “Without jeopardizing anyone, we’re always ready to help Albanians as well, and without any ethnic quotas,” he said.

Albanian Prime Minister Edi Rama, meanwhile, has pledged to send “a symbolic number of vaccines” to Kosovo for front-line medical personnel as early as next week.

“It is important to think not like the EU, but to think that we are not alone, because Kosovo and Albania are one in joy and trouble, Rama said after getting his shot.

Font ruled out buying Holand or Mbappe in the summer: To say the opposite is to lie to Barca fans
Sporting extended the contract with coach Amorim until 2024. The club leads Portugal by a 12-point margin
Moreno has scored Villarreal's last 5 goals in La Liga. Best result at the club since Bakambu in 2017
Schalke have not won 10 matches and are last in the Bundesliga. They have 10 points in 24 games
Monchi apologized to Koeman for calling him a whiner. He also apologized to Messi
A player from the 3rd division of Guatemala was disqualified for 5 years for hitting a referee in the face
Benzema can play with Atletico. He returned to the general group of Real Madrid