Waves is a story about the black American experience, written and directed by a white man, Trey Edward Shults.

In the angry echo chamber of social media right now, some would insist that should condemn it to an early death. But, says African-American actor Sterling K. Brown, not so fast.

“I’ve benefited greatly from colour-blind casting and wanting to see diversity championed,” says Brown, who won back-to-back Emmys for his roles in The People Vs OJ Simpson and This Is Us.

“That’s one thing, where a character is written and he could be white, he could be Indian, he could be Mexican. But it’s another thing to say, ‘We’re going to put a black person in this role and we’re going to make it as specific to his experience as possible’.” 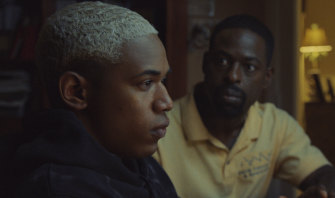 Tyler (Kelvin Harrison jnr) and his father Ronald (Sterling K. Brown) in a scene from Waves.Credit:Universal

And that, he says, is what happened with Waves, in which Brown plays the father of Tyler (Kelvin Harrison jnr), a smart and popular high-school student who is on track for a wrestling scholarship to college until his life goes horribly, violently, off the rails.

Brown had reservations about the story arc when he first read the script, but he didn’t then realise the guy behind it was white.

“I had this conversation with him on the phone, and he has more bass in his voice than I do, and I thought I’m speaking with a brother named Trey,” he laughs. “He’s like, ‘I hear what you’re saying, brah, can you talk to me about ways you think we can make it better’. ‘Yeah, bro, of course’.”

Shults assured him he wasn’t interested in “vilifying the black male body”, but rather wanted to show “the humanity of a young child who loses his way and makes a bad choice”. 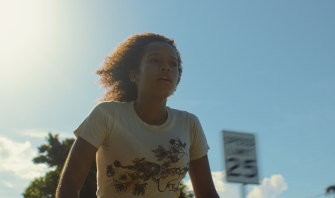 Brown was impressed, and still is. “When that kind of collaboration happens, you can have a Trey at the helm because he cares about getting it right,” he says. “He’s not so beholden to his original vision that there’s no room to breathe and expand and grow and make something specific to [the characters’] experiences. And that’s what made me feel so great about being a part of it.”

Shults is clearly up for a challenge. With the key dramatic moment involving an accidental act of violence against a woman, his film arguably sits at the intersection of the BLM and MeToo movements. Are you, I ask him over Zoom, insane?

“Yes,” Shults admits. “Everyone thought it was risky. If we messed up the line, we failed. If you leave this movie thinking it’s purely about good and bad, we’ve absolutely failed. The whole movie was about trying to tackle this heavy stuff and show some empathy, and do it honestly.”

For all that it attempts to speak authentically to the experience of being black in America right now, Waves actually began as a very personal story for Shultz, drawn from his own experiences and those of his girlfriend (the film is bifurcated, shifting focus in its second act to Tyler’s sister Emily, played by the terrific Taylor Russell). 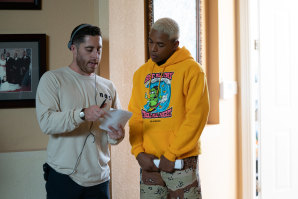 But when he and Harrison bonded on the set of It Comes At Night – the actor plays Joel Edgerton’s son in Shults’ 2017 post-apocalyptic thriller – and started looking for a new project to do together, “the only idea I had was this movie”.

They talked about whether it could become something meaningful in the context of a black family. “And we started doing these mini-therapy sessions, phone calls, and text messages, where we’d just talk and get to know each other. And we started finding a lot of commonalities – growing up in the South, our relationships with our fathers, the pressures we felt, what relationships felt like at that age. But we also found a lot of specificities.”

Shults would write a draft and send it to Harrison; the young actor would send back notes, suggestions, ideas about how a scene might play out in his own family, and Shultz would incorporate them in the next version. They were still revising, he says, “on the day of shooting”.

It was a massive departure from his usual way of writing but, he says, “it was great to bring in a lead actor early on, to work together that way. It was incredible”.

But even if the end result feels uncommonly truthful to Brown, he’s not about to give free rein for white writer-directors to tell black stories. “I would say we’re a delightful unicorn in that conversation,” he says wryly.

If everyone historically had equal opportunity to tell their stories on film then “a free-for-all” might be OK. But the reality, he says, is that “for such a long time the folks who have had access to telling stories have primarily not been those marginalised voices. So if those marginalised voices actually have an opportunity to tell those stories then we should grant them that access.”

Though it’s not overtly a story about incarceration or police brutality, those things can’t help but lurk at the margins of Waves, and in that respect it has landed in Australian cinemas at an apposite moment. But Brown isn’t sure “fortunate timing” is the right phrase, all things considered.

“I don’t know that ‘fortunate’ would ever be the right word when you’re talking about systemic racism and police brutality,” he says. “But it feels like people are paying attention in ways they haven’t in years past. So if the film is received with an openness of mind and spirit that means folks can take it in in a way they might not have been able to before then that is fortunate.

Waves is in cinemas now.

Messi-Casillas: you are an incredible goalkeeper. It was a beautiful rivalry that made you overcome yourself
Ferran Torres: Ronaldo was the best. He is an example for everyone who wants to achieve the maximum in football
Barcelona cannot agree with Ter Stegen on a new contract. The goalkeeper wants to stay
We found out how the fascinating logo of Iceland appeared: Game of thrones has nothing to do with it, the source of audacity is the success of the national team
Ronaldo-Casillas: Proud that we shared great moments
Bayern want to sell Boateng in the summer. The club has no offers yet
Solskjaer on the Europa League: a Trophy would be a big step forward for Manchester United. We want to win something
Source https://www.smh.com.au/culture/movies/a-delightful-unicorn-does-waves-prove-a-white-man-can-tell-a-black-story-20200713-p55blv.html?ref=rss&utm_medium=rss&utm_source=rss_feed