About 50,000 people are only in aged care because they can't get support to stay at home, with aged care advocates putting pressure on the Morrison government to unveil more home care packages in Tuesday's federal budget.

Council on the Ageing chief executive Ian Yates said the fact that one in five people in aged care could not remain safely at home, drawn from the latest data published by the federal Health Department, meant "the system has let them down, and let their families down". 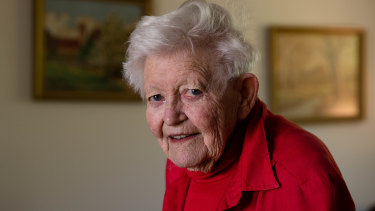 Val Fell, 91, is hoping she will never have to go into aged care. Credit:Janie Barrett

"On top of that many more went to a nursing home because their family knew how long they would have to wait for home care," Mr Yates said.

Figtree's Val Fell, 91, said some members of her dementia carers' support group had been waiting years for a home care package and it was not uncommon for their loved one to die waiting - a story shared by 30,000 other families over the past three years.

"I don't know anybody who would choose to go into an aged care home unless they absolutely had to. That's a last resort," said Mrs Fell, who cared for her late husband Ian Fell at home until he became too unwell and went into residential aged care in 2010.

Of the 50,000 people estimated to be living in residential aged care after failing to get a home care package, she said, "They don't want to be there. They're there because they have to be."

This was the case even before COVID-19 hit, Mrs Fell said, but the pandemic "has exacerbated it."

More than 665 aged care residents have died with COVID-19 during the pandemic, while only seven home care recipients had died with the virus as of Wednesday morning.

Official figures provided to a Senate estimates committee show almost 19,000 older Australians waiting for home care were forced into a nursing home in 2018-19 because they could not get the care they needed at home.

"We receive far too many calls from older people or families at their wits' end because they have waited 18 months or more for the care they need at home," Mr Yates said.

Mrs Fell called on Prime Minister Scott Morrison to fix the system so that people who wanted to stay at home could do so.

"The whole funding arrangement needs to be changed," she said.

Health department officials told the COVID-19 Senate inquiry hearing on Tuesday that 10,569 people had died on the home care wait list in 2019-20 and that 102,081 people were waiting for a home care package on June 30 - including 15,873 for a level 4 package, the highest level of care.

Of the 211,029 people assessed as eligible for a home care package on March 31, only 43 per cent were receiving the level of care they were approved for.

The Royal Commission's interim report in October 2019 recommended the government take immediate action to address the chronic shortage of packages that would support people to stay at home as they age.

While the government says it has increased home care packages by more than 50,000 since the 2018-19 budget, Health Department documents tendered to the Royal Commission show that only 373 were in addition to those included in the budget's forward estimates.

Aged Care Minister Richard Colbeck did not respond to a request for comment before deadline.

Two warring club are tired of the greyness, came together and changed the Danish football. This is the path of Midtjylland - now he is in the Champions League
Hakimi had contracted the coronavirus. Inter will play Borussia Gladbach today
Manchester United's debt increased by 133% in the 2019/20 season, while revenues fell by 19%. Loss - 23.2 million pounds
Liverpool, Manchester United, Real Madrid are preparing the European Premier League project. It seems that everything is serious now: they are supported by FIFA
Lampard on Cech in the Premier League bid: it will be good for Our goalkeepers to train with one of the best goalkeepers. He is relatively young
Coach Salzburg had a problem with being an American. And I came up with a game style while watching the Princeton rowers
Ozil on not being included in Arsenal's Premier League bid: Very disappointed. Loyalty is rare today
Source https://www.theage.com.au/politics/federal/a-last-resort-50-000-older-australians-trapped-in-residential-aged-care-20200930-p560qx.html?ref=rss&utm_medium=rss&utm_source=rss_feed