The FFA has confirmed that the revised draw for the A-League season will see ladder leaders Sydney FC now headlining the competition restart with a blockbuster clash against third-placed Wellington Phoenix on Friday night.

The match will be held at Netstrata Jubilee Stadium and a limited number of fans will be able to attend.

FFA had originally intended to kick the restarted campaign off in Melbourne on Thursday night, with Western United facing Melbourne Victory, but the coronavirus spike and the need for Victorian teams to flee the stricken state and relocate to a New South Wales hub put paid to that. 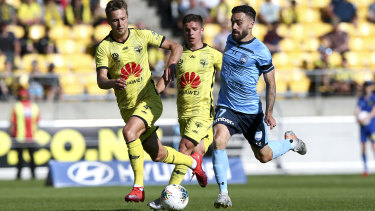 Sydney FC and Wellington will kick-off the resumed A-League season on Friday as the FFA makes further tweaks to the season schedule. Credit:Getty Images

All three Victorian clubs - Western United, which has six games remaining, Victory, which has five, and second-on-the-table Melbourne City, which has three left to play, arrived in Sydney on Saturday.

The Victorian teams are all staying in the same western suburbs hotel as they wait out their quarantine period, with each club given a floor.

Aside from going to the designated training areas players, coaches and staff are restricted in their movements. One problem they face is that only two people are allowed in a lift at once, so many are opting to walk down the stairs to the ground floor.

They can train, but they are not allowed to start playing games until July 26 - hence the A-League's need to rework the competition schedule.

The other games scheduled over the weekend - Perth Glory v Central Coast on Saturday and Brisbane Roar v Adelaide United on Sunday - are set to go ahead as planned.

FFA officials are still grappling with dates and venues for the repositioned games involving the Victorian clubs but say the full, new fixture will be released on Tuesday.

The wishes of broadcaster Fox Sports, ground availability and other logistical issues had to be hastily reconsidered once City, Western and Victory did manage to make it out of Victoria last weekend.

FFA's Head of Leagues, Greg O'Rourke, copped plenty of flak following the delays in relocating the Victorian sides last week but is relieved that at last the games are set to go ahead.

"We have faced many challenges over the past week since we released the original match schedule and it will need a few tweaks to reschedule the Melbourne teams, considering their relocation to Sydney," said O'Rourke.

"Under the conditions of the exemption from the NSW Government, Melbourne City FC, Melbourne Victory and Western United FC will undergo a 14-day quarantine period before being able to rejoin the competition, which has meant we have had to update our match schedule accordingly.

"The final schedule will be released tomorrow [Tuesday] with no impact to this weekend's games and minimal changes excepting Melbourne-based teams.

"Fans will be able to attend selected matches in line with government guidelines and I look forward to the teams returning to the business of playing football.

"We are now focused on finishing what we started."

Sydney, Wellington and Perth also have heavy workloads as they, like Western, have six matches remaining.

In contrast, Melbourne City can afford to take a relatively relaxed approach given they have only fixtures left to fulfil and have the points on the board.

Lopetegi about éver Banega: When he plays well, the whole of Seville plays well
Sanchez received 7.5 million pounds from Manchester United for terminating his contract
Javi Martinez is Interesting to Renn. The club will play in the Champions League
Fonseca Pro 0:2 with Sevilla: Roma deserved to lose
Manchester United are ready to sell Lingard. He has scored in the last two matches
Dzeko Pro 0:2 with Sevilla: Roma never got into the game
Sergio Region: Sevilla are determined to win the Europa League. We want to win everything we can
Source https://www.smh.com.au/sport/soccer/a-league-to-resume-with-sydney-v-wellington-clash-as-vic-clubs-quarantine-20200713-p55bn3.html?ref=rss&utm_medium=rss&utm_source=rss_feed