Former prime minister Kevin Rudd has declared there are "major gaps" in Australia's new defence strategy, accusing the Coalition government of a "botched" submarine program and failing to build up the nation's cyber defences fast enough.

Mr Rudd also hit out at the government's Pacific "step-up", saying its aid spending in the region has only just recovered to where it was in 2013, which had opened the door to China "because Australia was seen as an unreliable aid partner". 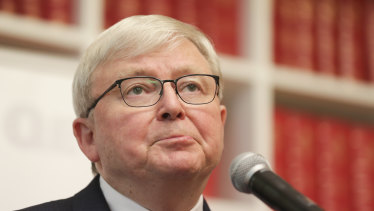 The Morrison government this week released a new Strategic Policy Update and Force Structure Review, which committed the nation to developing an anti-ballistic missile defence shield under a $270 billion build-up of the ADF over the next decade.

Prime Minister Scott Morrison announced the government would purchase new long-range missiles for its fleet of Super Hornets to defend its deployed forces abroad and investigate the possibility of developing hypersonic missiles that can travel at least five times the speed of sound.

Mr Rudd, who was also foreign minister in the Gillard government, said there were three significant gaps in the Morrison government's new strategy: the delay in the delivery of the new attack-class submarines; the lack of spending on aid in the region; and a failure to acknowledge it had been slow to realise the importance of cyber capabilities.

When the Coalition entered government in 2013, the delivery date for the new submarines was set for the early 2020s but it has been pushed out to the 2030s, highlighting the need to upgrade the existing Collins class of boats to avoid a capability gap.

"My government's 2009 Defence White Paper was the first to enunciate major changes in Australia's strategic circumstances because of China's rise," Mr Rudd said.

"The 2009 White Paper announced a doubling of the Australian submarine fleet.

"Eleven years later, that project has been comprehensively botched. The building of the first vessel has not even begun. In our current strategic circumstances, this is a national security scandal."

Mr Rudd said the Pacific step-up was "the second scandal" as the government was only now "attempting to restore Australia's real aid level to the Pacific to where it was in 2013".

"This has opened the door far and wide to China's aid presence," he said, adding Australia was also seen as "dismissive of the island states' existential concern about climate change".

The Morrison government this week announced it would recruit 500 cyber spies and build on its offensive capabilities to take the online fight overseas as part of a $1.3 billion funding boost to the Australian Signals directorate.

Australia's new defence strategy comes on the back of China's growing assertiveness across the region including growing militarisation in the South China Sea, border clashes with India and encroachment on democratic freedoms in Hong Kong.

Mr Howard on Thursday said Australia needed to maintain a healthy relationship with Beijing, but it was important to realise the attitude of President Xi Jinping's two predecessors, Hu Jintao and Jiang Zemin, towards the west was very different to the current leader.

"They (Hu and Jiang) looked for co-operation and you saw the possibility of building ... a very close relationship between the two countries," Mr Howard told Sky News.

"But under Xi Jinping, China has become more authoritarian internally, it is more assertive in the region, it is throwing its weight around, and we have to recognise that and ... continue to toil away at keeping the bilateral relationship together."

Mr Howard said China was "more likely to alter its attitude if it sees resistance".

"And that is why I think the attitude taken by the government regarding foreign interference I think the defence announcement... are all very important," he said.

Defence Minister Linda Reynolds said Australia's new defence buildup was not aimed at any one single country, but was an acknowledgment of the "deteriorating geo-strategic circumstances".

She said the response from other countries in the region to Australia's announcement had been "incredibly strong".

Vertonghen goes to Benfica. The contract is for 3 years
Arsenal will sign Willian in the next two days
Juventus highly rates Raul Jimenez. He's like Pirlo and Partici
Juventus are seriously Interested in Atletico midfielder Thomas
Champions League format for Atletico: Simeone's team is still an underdog, but now they have the best chance
Atletico claims the goalkeeper of the national team of Serbia and Eibar Dmitrovic, compensation – 20 million euros
The FA Cup will be held without replays in the 2020/21 season, and there will be one match in the 1/2 final of the League Cup
Source https://www.smh.com.au/politics/federal/a-national-security-scandal-kevin-rudd-names-three-gaps-in-defence-strategy-20200702-p558gf.html?ref=rss&utm_medium=rss&utm_source=rss_feed