As you drive along Peninsula Link later this year, ahead of you will appear an outsize pearl necklace: a neat oval of spheres in a huge, ironic tribute to this classic symbol of contented affluence at the gateway to the Mornington Peninsula.

But when you drive past, the pattern dissolves into chaos. "It falls apart," says Manon van Kouswijk, the artist behind Peninsula Pearls, the new sculpture due to be installed beside the freeway in September as this year's $300,000 Southern Way McClelland Commission. 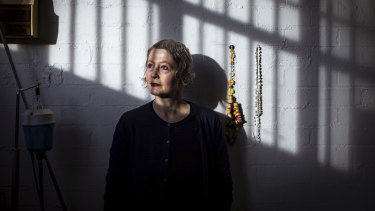 "I was a little reluctant to be honest - I'm a jeweller, not a sculptor," says Van Kouswijk from her Fitzroy studio. She trained in jewellery at the Rietveld art school in Amsterdam, an academy steeped in the Bauhaus tradition that unifies crafts and the fine arts, form and function.

"I was trained to approach jewellery with the attitude of an artist," she says. "I was working a lot with archetypal forms - pearls and beaded necklaces - and looking at ways of subverting the idea of value, the material value."

The pearl necklace in particular attracted her, with the "idea of perfection at the heart of it", its almost taboo status, a classical piece of jewellery that is "very much about status, confirming status".

So she has played with this over the years, in works that frame necklaces in different ways to draw attention to the interplay between their form and function, their nature and their cultural baggage.

Recently she has been interested in the transitions jewellery goes through: on display, being worn, being taken off. She has played with the way you can pull and push a necklace into a shape like a smiling face, then lift it up and the face is gone.

Then the Monash Art Projects studio approached her with a challenge: translate these ideas into a public sculpture and apply for the McClelland.

"They convinced me to have a few meetings and go through the idea," she says. "I was thinking I'd just do it for the experience, because the chance of getting a commission like this is so tiny."

So she started thinking how her ideas could translate to such a big object. And she also thought about some of her other favourite public artworks, such as Callum Morton's EastLink Hotel, which she found first puzzling, then astonishing (and also a little creepy).

"I like works that change: you encounter them, they mark the journey, and the next time you might look at them differently," Van Kouswijk says. "It's going to sit there for four years without interruption, it's almost the opposite of jewellery - it's big and you can't put it away.

"And I thought of the wearer moving with the object, or in this case the audience passing by the object... Like jewellery it is an experience and a transition. You encounter it, and it changes."

The new sculpture will replace Michael Riddle's Iconoclast at the Skye Road exit ramp, as part of a series of 14 commissions over 25 years to 2037, funded by Southern Way.

After four years on display the sculptures relocate to McClelland Scupture Park+Gallery.

Gallery director Lisa Byrne said Peninsular Pearls "will be a wonderful surprise" for the 74,000 people who drive past each day.

Nuno about 0:1 with Sevilla: Disappointment. Wolverhampton conceded too often in the final minutes
Immobile about Newcastle: They called my agent when the sheikhs bought the club
Liverpool are confident they will sign Tiago. The player has already agreed a contract and is pressing Bayern
Our judging = fear and helplessness. Instead of Kaloshin and Kashshai – a soulless system that does not care
Lothar Matteus: Messi is not enough to pass such a Bayern. I am not afraid of Barca
Thomas Tuchel: Mbappe will play Atalanta if nothing happens
Lille acquired 20-year-old forward David from Gent. He is the best sniper of the CONCACAF Cup
Source https://www.theage.com.au/culture/art-and-design/a-pearl-necklace-collapses-dynamic-new-sculpture-for-the-peninsula-20200713-p55bk8.html?ref=rss&utm_medium=rss&utm_source=rss_culture