Network congestion is stopping millions of Australians selling their surplus solar power to the electricity grid, but a trial of new technology to unblock the network could deliver a hip-pocket boost to householders across the country.

The Australian Renewable Energy Agency (ARENA) is working with network operators and fitting smart inverter technology to 600 houses in areas where the network is most constrained so access to feed-in tariffs for supplying the grid is fairer. 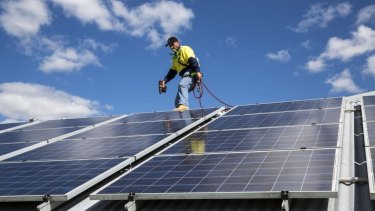 Most rooftop panels lack technology to regulate supply into the grid.Credit:Glenn Hunt

"With household solar continuing to grow, it is really critical that we can maximise the potential of rooftop solar," said ARENA chief executive Darren Miller.

Export limits are placed on rooftop solar panels at the time of installation, which disadvantages households that had their panels installed most recently – particularly in areas with the highest uptake of panels.

Because those panels cannot regulate output, to avoid overload, networks have to set limits calculated by capacity on the sunniest day. That means the opportunity to take maximum power supply on cooler days is missed.

"At present, solar owners who got in early are able to sell their surplus electricity back to the grid without limits, but late adopters are restricted – which is also unfair."

ARENA and network operators AusNet in Melbourne and SA Power Networks in South Australia are conducting the trials, worth a total of $4.8 million.

"A smart and flexible solution for solar energy exports is a win-win," said Andrew McConnell of AusNet Services. "It means more Australian homes and businesses can benefit from solar panels, and that our energy mix becomes cleaner overall."

Australian government feed-in tariffs for households that supply solar power to the grid have led the country to the highest installation rate in the world. More than 2 million of the nation's 13 million homes have been fitted with panels. Around 200,000 rooftop solar systems are being installed each year across the country.

Lucescu on the Juventus defeat: Maybe 0:2 is a lot for such a match. We played very well
Pique may miss the match with Juventus due to removal in the game with Ferencvaros
Gnabry contracted the coronavirus. Bayern play Atletico tomorrow
Fati is the first in the history of the Champions League to score 2 goals under the age of 18
Messi scored in the 16th consecutive Champions League season and repeated Giggs' record
Bruno did not score a PSG penalty at the first attempt, but the referee asked for an Interruption due to Navas' exit from the goal line
Koeman is the fifth coach to manage 6 teams in the Champions League
Source https://www.theage.com.au/politics/federal/a-win-win-new-rooftop-solar-technology-could-boost-household-earnings-20201001-p5614k.html?ref=rss&utm_medium=rss&utm_source=rss_feed