Thousands of skilled migrants with valid visas to come to Australia are stranded overseas, needing government permission to travel back and reunite with their families and jobs.

Under measures to contain the COVID-19 pandemic since March 20, foreign nationals have required a travel exemption to enter Australia even if they already have a visa, though the Department of Home Affairs has refused to disclose the legal basis for this requirement. This includes both short-term visitors and long-term residents on visas.

A spokesperson for the Australian Border Force said the agency had received 109,743 requests for a travel exemption to enter Australia as of August 31. Of those, ABF granted permission for 16,860 people to enter Australia, including 5142 cases associated with critical skills or industry sectors and 3419 on compassionate grounds. 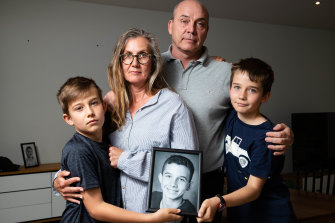 Soren and Ingri Madsen with their children, Philip and William, in their Sydney home. Their eldest son, Victor, has a visa to join them but has been refused a travel exemption to enter the country.Credit:Janie Barrett

A request can cover more than one person and there can be multiple requests from the same person; resubmitted applications counted as new requests until the system changed in mid-July.

There are thought to be more than 40,000 skilled migrants on 457 and 482 visas currently outside the country, based on figures from Home Affairs and the Bureau of Statistics. That includes people who have left Australia permanently but still hold a valid visa as well as those keen to return. 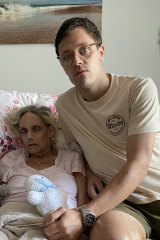 Chef Chris Farrell, who has lived in Sydney for six years and has an Australian partner, returned to the UK to visit his dying mother Janet.

Senators and MPs are fielding hundreds of requests for help from temporary migrants who need permission to return to Australia. The Sun-Herald has spoken to more than half a dozen people in this situation, including couples living apart and parents separated from children.

Chris Farrell, 33, is a chef for acclaimed Sydney restaurant Three Blue Ducks on a sponsored 457 visa. He has lived here for six years, recently qualified for permanent residency, has an Australian girlfriend and a lease in Rosebery in the inner south.

In July, Mr Farrell travelled to Britain to see his mother who is dying of cancer. He has applied five times for approval to return, with support from his employer, but has been refused every time. "I'm absolutely devastated," Mr Farrell said. "Cancer has ruined my family and now I feel like I have been punished because I wanted to say goodbye to my mum."

Soren Madsen from Denmark is on a 482 visa running international logistics company Scan Global, which helped import face masks during the pandemic. He lives in Manly with his wife and 10-year-old twin boys, while his eldest son Victor, 22, has a visa and was meant to rejoin his family after finishing university in Amsterdam.

But Victor was refused a travel exemption and instead had to return to Denmark, a country where he has not lived since he was 13, has no job and only two relatives. "He's a strong young man but it's not like he's smiling," Mr Madsen said of his son. "He is confident and he's just waiting, but it takes a little bit of a toll."

Labor immigration spokeswoman Kristina Keneally said employers waiting for critical staff to be let back into the country were frustrated that Prime Minister Scott Morrison had "one rule for his mates, and another for everyone else".

"British billionaire Lord Sugar has been given an exemption by the Morrison government to travel into the country to film a reality television show, but small and medium sized businesses I talk to keep being told 'no, you can't have your staff back'," she said.

Once foreign nationals obtain a travel exemption, they would join the queue of Australians unable to get flights because international arrivals are capped at 4000 a week and 30 per plane. Australian citizens and permanent residents require permission to leave the country under the Biosecurity Act but not to return. All international arrivals must pay for a 14-day quarantine stay in a hotel.

Prime Minister Scott Morrison said on Friday a deal with the states to lift the arrivals cap to 6000 a week within the next few weeks would mean most people, if not everyone, stranded overseas could return by Christmas. A spokesman said he was referring to the 24,000 citizens and permanent residents who have registered their desire to return to Australia with the Department of Foreign Affairs and Trade. 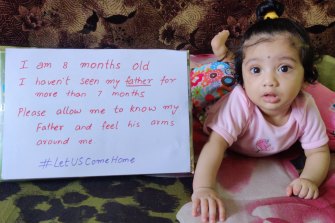 Aradhya Ojha is trapped in India with her mother and brother, separated from her father. The whole family have valid visas and have lived in Sydney since February 2018.

Bineet Ojha, a risk analyst on a 457 visa for one of the big four banks, works in Sydney while his wife Vandana Mohanty, their son Arihant, 7, and baby daughter Aradhya are stranded in India without permission to return. He only saw his newborn for a few days in January before he had to go back to work, while the rest of the family was meant to follow in April.

"My husband has not been able to see our 8-month-old daughter for more than seven months now," Ms Mohanty said. "He is a complete stranger to her and missing all her milestones. Our son is also hugely missing his father, who is his best buddy."

Greens immigration spokesman Nick McKim said the government needed to do more to help citizens but this was "not mutually exclusive" with helping temporary migrants. His office had 400 cases on its books of visa holders trapped overseas, including 28 families where parents are separated from their children and 140 where couples are separated and this would "only be a fraction of the total".

"Most of these people have built lives in Australia - they work here, they run businesses here, their kids go to school here, they pay taxes here, they've made their homes here," Senator McKim said. "It's been six months, and the government can't simply keep avoiding this issue."

Senator McKim said ABF's decision making was "opaque". The criteria that ABF uses to decide a travel exemption request was only published for the first time last week.

The ABF said between March 20 and August 31 it refused permission for 6100 foreign nationals to enter Australia. It declined to provide detailed information about the remaining 86,783 requests, saying it included requests that did not contain sufficient information, those that were withdrawn and those from people already exempt.

Abul Rizvi, the former deputy secretary of immigration, said there was no good legal basis for requiring someone with a valid visa to also obtain a travel exemption. There is a public health clause in the Migration Act but Mr Rizvi said "legally it would be a stretch" because you would have to prove the person actually has COVID-19.

Sandro Tonali: Milan on the crest of a wave. The Rossoneri shirt is pressing, but I'm getting in shape
Kadyrov's adviser hit the judge in the groin, and his son was dismissed from Akhmat and banned for three years. At first they all denied
AEK Carrera lost both matches in the Europa League with a total score of 1:5
Stefano Pioli: Milan have not achieved anything yet. The season is long, we will face difficulties
Mourinho 0:1 with Antwerp: the Best team won and the worst team lost
Bale did not make a performance in his first three games for Tottenham. He hasn't scored since January
Father Courtois: Keylor Navas was not a good teammate. When he left for PSG, everything became easier
Source https://www.theage.com.au/politics/federal/absolutely-devastated-thousands-of-residents-on-visas-locked-out-of-australia-20200918-p55x5i.html?ref=rss&utm_medium=rss&utm_source=rss_feed