Abuse of players is over the top: Langer

Australian cricket coach Justin Langer has hit out at the rise and rise of vitriolic abuse of sportspeople, at venues and on social media.

Revisiting Australia’s long and eventful World Cup/Ashes sojourn in England last year when interviewed this week by Charlie Webster for a podcast called The Sporting Mind, Langer said: “Some of the things we got exposed to, I still can’t believe it. It was from parents who had their little kids next to them. It just doesn’t make any sense to me.” 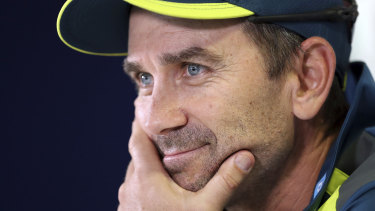 Australia coach Justin Langer says the fact players are public figures should not open them to abuse from strangers.Credit:PA

He heard the justifications: “You get paid a lot of money, so harden up. You’ve got to have a sense of humour.”

“Are you kidding me?” he asked rhetorically. “It’s what we choose to go into, and I get that. But there’s still common courtesy, still common decency, and it’s really lacking in our community.”

As for social media, where extremists have ruffled feathers in the AFL this season, Langer – a West Coast board member – said he would advise anyone in public life to turn their back on it.

Langer remembered an early instance of summary media management in his career. Under pressure before a Test against Pakistan in Hobart in 1998, captain Steve Waugh reassured him at breakfast that he was wanted and needed.

In the nets later that day, he overheard a journalist ask Waugh if he had any advice for Langer. “Yes, Malcolm, I’ve got some advice for him: stop reading your shit,” replied Waugh. In the way of these things, that journalist now works with Langer as media manager for Cricket Australia.

As is well known, Langer is a magpie when it comes to collecting useful pearls of wisdom. He recalled a dinner he shared with Waugh, Matthew Hayden, broadcaster Alan Jones and media magnate Kerry Packer not long before Packer died in 2005.

“That is one of the great lessons of life,” Langer said.

Earlier this year, as the bushfire crisis grew in south-east Australia and Prime Minister Scott Morrison was besieged, Langer texted him to offer solidarity. “I would hate to be in your shoes because you can’t win,” he wrote.

He quoted a famous excerpt from a speech given by US president Ted Roosevelt in 1910 which begins: “It is not the critic who counts, not the man who points out how the strong man stumbles or where the doer of deeds could have done better. The credit belongs to the man who is actually in the arena …”

Replied Morrison: “Funny you should say that: I’ve got that in my office.”

Leeds United have offered Bayern 20 million euros for Nuisance. Clubs in final stages of negotiations
Pep has already spent under 480 million on city's defence, and this week broke the club record for spending on a defender
The APL referees will be asked to soften the hand play. But the League cannot deviate from the rules
Lyon values Aouar over 40 million euros. Arsenal offered 35
Tottenham are not selling Mourinho's merch - because Chelsea still own the trademark rights. But it didn't stop Manchester United
Shomurodov is close to moving from Rostov to Genoa for 8 million euros (Sport Italia)
Pobegalov about 12 cases of covid in Shinnik: I hope we can start training by October 4
Source https://www.theage.com.au/sport/cricket/abuse-of-players-is-over-the-top-langer-20200814-p55lum.html?ref=rss&utm_medium=rss&utm_source=rss_feed