AFL chairman Richard Goyder will not attend the first-ever grand final outside of Victoria because of Western Australia’s quarantine rules.

The influential businessman, who also chairs Qantas, Woodside and the Channel Seven Telethon Trust, is based on Perth and has been an outspoken critic of WA’s border restrictions. 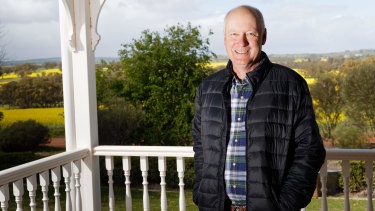 Qantas chairman Richard Goyder on his farm at Bejoording east of Perth.Credit:Trevor Collens

He confirmed on Tuesday he would not attend the October 24 grand final in Brisbane because of the WA government’s quarantine requirements.

“Unfortunately I'm not going to be at the grand final in Brisbane because of the quarantining arrangements; as chair of Qantas I can’t afford to be locked up for two weeks,” he told 6PR radio’s Gareth Parker.

Under current quarantine arrangements, anyone entering WA from interstate has to undergo two weeks quarantine, but there is a precedent for bosses of big companies receiving exemptions.

In June, Santos boss Kevin Gallagher was granted an exemption to enter WA and visit oil and gas facilities in the state’s north, and in July, billionaire Kerry Stokes flew into WA from Sydney and just days later sat next to WA Premier Mark McGowan at a lunch attended by 900 people.

Mr Goyder has been asked whether he has applied for a quarantine exemption.

This year the Telethon weekend, held in Perth annually to raise money for sick children, is being held the same weekend as the grand final.

“You’ve got your priorities wrong on this one,” she said.

Mr Goyder took aim at the Victorian ‘sledgehammer’ approach to lockdowns and the WA government’s hard border, and said there needed to be a change in thinking as the country moved toward a recovery phase.

“I do worry that there has been some overreach,” he said.

“I think there has to be a change in the political leadership as well which says we’ve done really well to get to where we’ve got to but now we’ve got to move forward and we’re well-equipped.

“I reckon at the end of the day, leading into this and locking us down is difficult but leading out is more challenging and we’re going to need really strong leadership to do that I think.

"I worry about youth unemployment, I worry about mental health issues. I think some of these costs have been forgotten a bit.

"This notion that we can't afford to have one case of community transmission is sort of crazy."

"If we took the same approach to driving, we wouldn't be driving cars, or if we were we would be driving at a maximum speed limit of 5km/h," he said.

Mr McGowan stood by his government's border policy at a press conference on Tuesday, and said a cautious response was still needed despite Victoria's dropping case numbers.

"We have come so far in our COVID journey, we don't want all our efforts ... to go to waste," he said.

Hans-Dieter flick: I Hope Alaba will sign a contract with Bayern. Our club is one of the best in the world
Diego Maradona: Messi gave Barca everything, brought them to the top. He was not treated the way he deserved
Federico Chiesa: I hope to leave my mark in Juve. We will achieve great results
The Coach Of Benfica: I don't want us to look like the current Barcelona, it has nothing
Guardiola on returning to Barca: I'm happy at Manchester City. I hope to stay here
Fabinho will not play with West ham due to injury
Ronald Koeman: Maradona was the best in his time. Now the best Messi
Source https://www.smh.com.au/national/afl-chair-to-miss-grand-final-because-of-wa-border-bureaucracy-20200929-p560dm.html?ref=rss&utm_medium=rss&utm_source=rss_national