Four years after it started negotiations on its enterprise agreement aviation services giant Swissport still does not have an approved deal after the Fair Work Commission found for the second time its proposal does not pass the "Better Off Overall Test".

The BOOT, as it is known, requires agreements to leave all workers in a better position than the industry award but employers argue it is a complex measure that often delays and sometimes stops them striking mutually beneficial deals with staff. 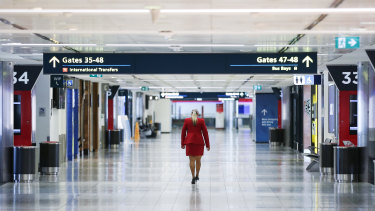 Swissport provides ground services to airlines including Virgin and has seen its business dry up with the coronavirus pandemic.Credit:Bloomberg

It is also a prime focus of Morrison government-run negotiations between business and unions that aim to kick start jobs growth in the wake of the coronavirus pandemic, where one option is to replace it with a less stringent "no disadvantage" test.

Swissport, which before the pandemic employed thousands of workers at airports around Australia doing everything from checking in passengers to loading planes, said its agreement had been supported by 91 per cent of employees who voted on it and would have left many workers thousands of dollars better off.

However, the Transport Workers Union appealed the enterprise agreement as it didn't believe it was a fair outcome for its members. Three Fair Work commissioners this week upheld the appeal, finding the rosters examined by a previous commissioner were not sufficient to be sure the agreement would leave them better off overall, as they didn't cover all the different shift patterns employees might work.

Swissport's Asia Pacific boss Glenn Rutherford said the industrial relations system was so complex employers and workers were losing faith in it.

"The complexity of Australia's industrial relations system is creating so much uncertainty, and delaying the wishes of workers and employers, that it is becoming a 'JobKiller'," Mr Rutherford said.

"If the Fair Work Commission could not understand the rules, what hope is there for workers and employers?"

The TWU said Swissport was trying to drive workers' conditions below the legal minimum, including by proposing split shifts where workers are not paid for the time in between bursts of work.

"Swissport has spent four years fighting its own workers in expensive and lengthy court battles in an attempt to continue to rip them off with appalling conditions and below award rates," the union's national secretary Michael Kaine said.

"At any time Swissport could have, and still can, negotiate with the TWU and other unions on appropriate standards for their workers," he said. "When these standards can be agreed on, there is a case to be made for the system to acknowledge that workers and employers have co-operated to achieve a fair outcome."

Swissport's agreement will be reconsidered by the commission.

There is a broad consensus enterprise agreements should not take so long to approve and Mr Kaine, whose union is on the government's industrial relations reform enterprise agreement working group, signalled he could be open to a system that had a less strict test where unions and businesses negotiated a deal both sides thought was fair.

Under the Keating-era "no disadvantage" test, which was replaced by the Rudd government to businesses frustration, some workers could be worse off in a strict financial sense than under the award if it was overall what they wanted.

The government's working groups were given until September to negotiate, though the government has said it will likely legislate even if a compromise is not reached.

Another industrial fight looms when Parliament returns later this month, with the government expected to try to pass laws that let businesses who do not qualify for JobKeeper maintain the rights introduced with the wage subsidy scheme to cut workers' hours and change their duties. The government has argued flexibility will help businesses who have lost some turnover, but not enough to qualify for JobKeeper, while Labor points to some that are paying shareholders large dividends while paying their staff with taxpayers' money.

Labor sources said if the government moves those laws along with the JobKeeper extension then the outcome will come down to "who blinks first".

Barcelona's Interest in Isak Increased after Koeman's appointment. Larsson has a high opinion of the player (Mundo Seportivo)
Manuel Pellegrini: When you play against Real Madrid and var, it's too much
PSV and Porto are Interested in Barcelona midfielder PUC. He doesn't want to leave the club
Puyol about Barcelona: If we want to win the championship, we need to perform very well
Schalke sacked Wagner. The team has not won the Bundesliga since January
Iacini on 3:4 with Inter: Even a draw would be an unfair result, given how many chances Fiorentina created
Ramos Pro 3:2 with Betis: the Referee tried his best and didn't do anything intentionally
Source https://www.smh.com.au/politics/federal/after-four-years-aviation-giant-s-enterprise-agreement-is-still-not-approved-20200814-p55lq6.html?ref=rss&utm_medium=rss&utm_source=rss_feed