"Our takings have been down 60-80 per cent pretty much all the way through. The CBD died pretty much overnight in April and everyone thinks now that we've reopened that it's business as usual, and it is so not." 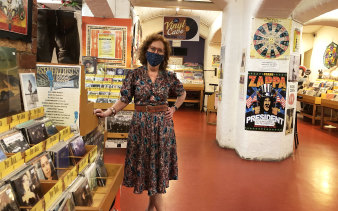 Ms Bennett has been here, at the underground record and music store she has run with her partner Rodney Jacobs for 26 years, almost every single day during the pandemic.

When trading was halted, she filled the store's online orders. Mr Jacobs – sick with leukemia and undergoing a trial treatment – spent the pandemic at home in isolation.

"I've been determined not to go under, especially for something that is not your fault," she said.

Every week, Ms Bennett has watched more and more For Lease signs springing up across the city's streets.

The majority of them, she said, were smaller businesses: one-off boutique shops; independent jewellery stores; quirky gems that made Melbourne's back streets and lanes more Melbourne.

"I don't know what's going to happen to all these indie, independent operators that have gone, and whether they'll come back," Ms Bennett said. "God, I hope so."

With offices filled with fewer than 10 per cent of staff, Melbourne's retail and hospitality sectors have been starved of the customers that make them tick.

Across the CBD and surrounding suburbs, 14 per cent of businesses are vacant and a further 14 per cent remain closed, despite restrictions easing.

They have taken a huge number of jobs with them: according to the Australian Bureau of Statistics, 13.2 per cent of jobs have been lost in inner Melbourne since the early weeks of the pandemic. 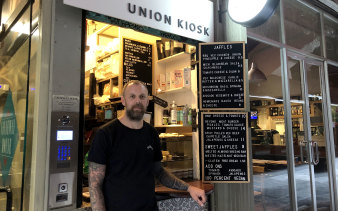 Union Kiosk owner Rohan Hehir stayed open during the pandemic, while more than a quarter of the CBD’s businesses shut their doors.Credit:Bianca Hall

Across Little Collins Street, tucked down a largely deserted The Causeway, is Rohan Hehir's pocket-sized Union Kiosk. Selling coffee, cold drinks and freshly-made jaffles, it's perfectly tailored for the time-poor officeworker crowds. Except there are very few of them to be found.

The Causeway has nine empty shops and cafes, six of them displaying For Lease signs.

Mr Hehir says most closures here pre-date COVID, but rattles off the names of shops in surrounding streets that have closed their doors for good.

"It was like a ghost town here, I was the only one open."

"It's been a tough year in lockdown, and our job is to look after customers and we were deprived of that for most of the year, he said."

Also buoying his mood "I punched the roof of the car when I heard it!" was Friday's announcement that after 28 days in a row of no new infections, Victoria had effectively eliminated the virus.

But Mr Luzz is in favour of a cautious approach to reopening.

"Both shutdowns were really hard," he said.

Koeman on transfers: If we want more, we have to buy. If no one comes, we will perform as we are now
Vazquez does not want to renew his contract with Real Madrid. He does not get a salary increase and believes that he is not appreciated
Goalkeeper Elche Badia: Messi is the best player in the world
Villas-Boas pro 1:3 with Monaco: What did VAR do today? Have you had coffee?
Ole Gunnar Solskjaer: Liverpool are a few points behind Manchester United in the Premier League, but they are still the top team
Zlatan about 0:3 with Atalanta: Ilicic could have scored even more. He had a lot of space
Andrea Pirlo: One trophy doesn't change anything. I want to win more
Source https://www.smh.com.au/national/victoria/after-hell-on-wheels-businesses-can-t-wait-for-city-workers-return-20201126-p56i9o.html?ref=rss&utm_medium=rss&utm_source=rss_national

An abundance of tracheotomies in some parts