Albanese tucks trousers into socks and pedals into bicycle diplomacy

It wasn’t quite Tony Abbott and a European leader in full lycra, nor Julie Bishop in compression tights in London, but Australia’s new prime minister Anthony Albanese wove a well-worn path as he set out for a spot of open-air diplomacy in Indonesia.

Albanese tucked his pants into his socks, dispensed with his tie, swung aboard a bicycle and pedalled off in the company of the President of Indonesia, Joko Widodo. 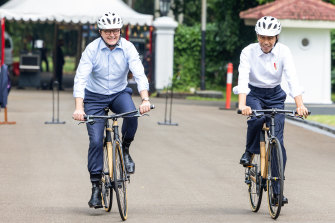 Wearing bicycling helmets, the pair wobbled around the gardens of the Presidential Palace in Bogor, about an hour outside Jakarta, chatting beyond the reach of journalists’ microphones.

These were no flash racing bikes. They were constructed from bamboo, the President pointed out.

Albanese wasn’t short of a response. 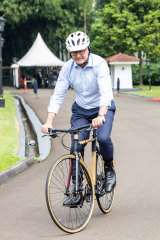 He said that “riding a bike, I think, is environmentally friendly and I think we have to start to convey a message on the importance of environmentally-friendly vehicles”.

He declared himself touched by the invitation to take a bamboo bike ride.

Many Indonesians used such humble transport each day, he said, adding that both he and President Wododo came themselves from humble beginnings. Wododo started working at the age of 12 in his father’s furniture workshop, and the family reportedly often found themselves facing evictions by their landlords.

In 2014, then Australian PM Tony Abbott took the visiting Prime Minister of the Netherlands, Mark Rutte, out for a ride around Canberra’s perfect roads.

Though they both donned lairy lycra, and Rutte came from the most bike-friendly nation in Europe, Abbott spared the visiting PM his normal pre-dawn hell-ride up and down the city’s steep Red Hill.

One of the more memorable moments of athletic diplomacy took place in London on 2018.

Then foreign minister Julie Bishop - immensely fit from her well-known regime of daily running - set out with Britain’s then foreign secretary, Boris Johnson, for a morning jog around London’s St James’s Park.

Bishop appeared perfectly comfortable as she loped along in her stylish compression tights. Johnson, however, wearing long shorts, or possibly short longs, his ample belly only barely contained within a t-shirt, was soon red-faced and gasping for mercy.

A perfect moment, really, for Bishop to put the squeeze on her friend Boris for consideration of a post-Brexit trade deal. 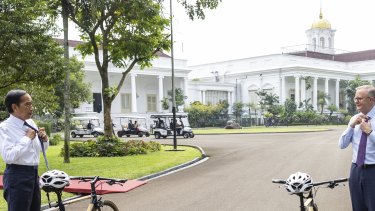 Back in Indonesia, Albanese, having freed his pants from his socks, said he regarded the invitation to ride around the President’s garden “as a great show of respect and a sign of friendship between Australia and Indonesia”.

He said the president had offered to send the bike to Australia “and you would see me driving around on what might be the only bamboo bike in Canberra”.

No one thought to ask what Australian Customs authorities might make of a bamboo model. Could a presidential bicycle in quarantine spark an unfortunate diplomatic incident?