A great deal has been said about the phenomenon of silence. Likewise, there is a crowd of people with thoughts about the significance of solitude. David Vincent has considered many of these thinkers, at least from the 19th century onwards. It is his good fortune that a book that has been a long time in the making has appeared at the very moment when the whole world has a fresh interest in the subject.

This year’s lockdowns have been experienced variously as a blessing and a curse. Some have enjoyed them and others not. Vincent helps us see that this variety is nothing new. He is one of those writers who clearly enjoys the passing parade and can share stories of both extreme and typical behaviour without needing to produce an overarching theory, except perhaps to admit that anything is easier when you aren’t worried about paying the bills. Isolation has always favoured the wealthy who have what they need and ascetics who don’t need anything. 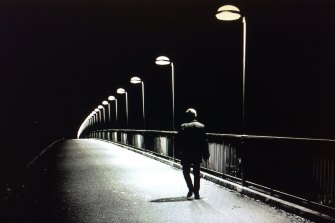 Vincent never uses words such as introvert and extrovert that nudge us towards tame generalisations. Rather, he has many curiosities to share about the history of walking dogs, angling, card games, solo sailing and stamp collecting. We learn that Wordsworth walked more than 175,000 miles in his life, mostly on his own, lonely as a cloud. The history of solitude takes us to many different places.

Let’s start with philately, a hobby that is by no means as popular as it used to be. This is not the first thing that you think of when the topic of solitude comes up but Vincent likes to wander off on his own, so to speak. The quiet pursuit emerged almost as soon as Rowland Hill created the famous Penny Black in 1840.

Vincent sees it as one of the many pastimes that allowed the leisurely to immerse themselves in something without human company. ‘‘As with Patience, it appealed to those wearied by more strenuous mental tasks.’’ It allowed men to have something akin to needlework. It also had a tinge of virtue because collecting stamps allowed the collector to own small possessions from every corner of the British Empire. 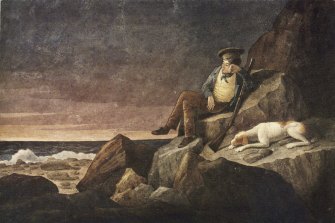 Augustus Earle's 1824 watercolour, Solitude. It depicts him during the time he was stranded on Tristan de Acunha.Credit:National Library of Australia

Even more important was the fact that postage stamps enabled isolated people to be in cheap and efficient contact with others, often far away. Indeed, it was one of the most significant factors in creating what Vincent calls ‘‘networked solitude’’, a way of being in company even when alone.

The appearance of the crossword puzzle in 1926 had a somewhat similar impact in the 20th century. It will take the jury some time to judge whether or not online gaming is an isolating or social phenomenon. Networked solitude has become an artform during the reign of COVID-19. It was uplifting to see how clever people on their own became at not being lonely.

It’s a pity that the historical scope of this book is not a little broader. It starts with the publication in 1791 of an English translation of Johann Georg Zimmermann’s Solitude Considered with Respect to its Dangerous Influence Upon the Mind and Heart. Zimmermann was not enamoured of solitude. He said it ‘‘must render the heart callous’’ and preferred ‘‘social and liberal intercourse’’. 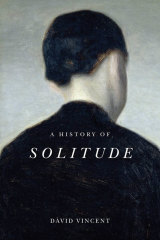 Zimmerman gives Vincent a place to start, even if it is fairly late in the development of his subject. There is more to the story of solitude, some of it to be found, for example, in Diarmaid MacCulloch’s fine book Silence: A Christian History.

The later stages of A History of Solitude reach deeper than his account of Victorian pastimes. The second half of Vincent’s book is totally absorbing. It considers, for example, the agonies and ecstasies of the solo round-the-world voyager and also of mountain climbers.

In 1900, Joshua Slocum circumnavigated the globe on his own in a vessel called Spray. He became a sensation and made enough money to retire miles from the sea. People were voracious to read about an endeavour they could not hope to emulate, either practically or emotionally. Others followed in his wake.

Vincent identifies four elements that profound solitude of this kind tends to feature. The first is toil, including sleep deprivation. People who live outside society often sleep worse because they are wary of what might happen in the night. The second is the company of books: ‘‘their engagement with literature represented a high point of networked solitude’’.

This aspect crops up again and again. When Terry Waite, the Archbishop of Canterbury’s special envoy was taken prisoner for five years in Lebanon (four of those spent in solitary confinement), books helped him remain sane. One of the special hardships faced by prisoners in solitary confinement is that they often cope with low rates of literacy.

The third element was nature. Epic solo voyagers discovered that sea life and birds accompanied them when they were miles from any sign of humanity. Finally, the solo voyager must embrace solitude itself. Some report feeling more at ease during a gale when they are working around the clock. When calm weather returns, ‘‘then came the sense of solitude which I could not shake off’’.

One of the heroes of this book is Thomas Merton, the Cistercian monk whose literary gifts in the middle of the 20th century provided a window for the rest of the world into radical solitude. Vincent compares the experience of a monk in his cell to that of a prisoner in a cell that may even look similar.

The difference, of course, is freedom and choice. Those who choose their solitude may find deep peace in it. Those who have it forced upon them many experience nothing but loneliness. Sadly, we are discovering just how much loneliness there is in our interconnected world.

Michael McGirr’s Books That Saved My Life is published by Text.

Koeman Pro 3:0 with Celta: Proud of the team. The results show that we are on the right track
Milan extended their unbeaten streak to 18 games by beating Rio Ave on penalties in the Europa League qualifier
Arteta on Manchester City in the League Cup: Arsenal are not very lucky with the draw. This is another test
Klopp about losing to Arsenal and Liverpool in the country of dreams, you have to score. Last pass failed
Muller held the UEFA ceremony in the stable. There had Neuer, Kimmich and Evangeliski
Liverpool 4 seasons in a row, cannot get past the 5th round of the League Cup and 2012 wins the tournament
Leno - first Arsenal goalkeeper in 8 years not to miss at Anfield
Source https://www.smh.com.au/culture/books/alone-again-naturally-or-not-20200806-p55j4c.html?ref=rss&utm_medium=rss&utm_source=rss_feed