In a rare flourish for one of the highest courts in the state, a Supreme Court master has penned a requiem to the "bare-knuckled" litigation it took to finally kill the late Alan Bond’s defunct Bell Group.

Titled "Ode to a dying corporation", Master Craig Sanderson said thousands worked on the Bell litigation that "swirled for 25 years". 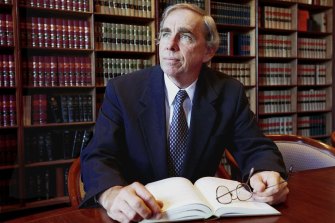 'No Australian judge before or since could have handled the case better': Former WA Supreme Court Justice Neville Owen.Credit:Fairfax Media

"Most have put the experience behind them and moved on; many, shattered by the experience, have retired; more than a few have gone mad," he wrote.

"Now the guns have fallen silent.

"The smell of cordite, gun powder and napalm no longer fills the air.

"The dead and wounded have been removed from the battle field.

"The victors have divided the spoils and departed."

Master Sanderson said despite the original trial judge, Supreme Justice Neville Owen, taking 404 days to listen in detailed care to evidence that resulted in 2643 pages of balanced judgement against the group of banks which seized and sold some of Bell Group’s assets, Justice Owen was appealed and cross-appealed, and “astonishingly” the matter looked to be heard in the High Court.

"No Australian judge before or since could have handled the case better than his honour," Master Sanderson said.

He said "even the bare-knuckled litigators were exhausted", but a settlement of more than $1 billion was reached out of court, which the company’s creditors "then set to squabbling among themselves".

"For years they had an uneasy relationship with one another but were united against a common foe," Master Sanderson said.

"Now the prospect of vast riches proved too much. The relationship rapidly became poisonous."

He said the state government "failed spectacularly" in its attempt to resolve the matter by effectively confiscating the proceeds of the case and paying to each of the parties what they deemed to be a fair entitlement.

It was tempting to drive a wooden stake through the heart of the company to ensure it does not rise zombie-like from the grave.

"Over the years, I dealt with the case on more than a dozen occasions," Master Sanderson said.

The liquidator was represented by now-Supreme Court Justice John Vaughan, who was a senior counsel at the time.

"There were times when I thought even his sphinx-like visage would crack," Master Sanderson said.

He said all that remained was to give Bell Group (UK) Holdings Ltd, and other companies in the group, "a decent burial".

"It was tempting to drive a wooden stake through the heart of the company to ensure it does not rise zombie-like from the grave," he surmised.

"As an alternative, I considered ordering the files be removed to a secure facility in Roswell and marked: 'Never to be opened'.

"In the end, trusting in divine providence, I made the following orders:

Gareth Bale: I want to be loved and appreciated. I will give my all for Tottenham
Eugene Giner: I don't see the point in inviting Messi to the RPL. Let's first make the League at least at the level of Spain
Pique agreed to a 50% pay cut at Barcelona until the end of the season
Ex-Rostov defender Bashtush moved from Lazio to Saudi al-ain
Schwartz about Dynamo: The impression of the training base is excellent
Metz forward Gyan is the best player in Ligue 1 in September. He is the leader of the goalscoring race
Miranchuk is able to play in almost any club in the world. Ex-midfielder Loko Drozdov about Atalanta newcomer
Source https://www.theage.com.au/national/western-australia/amen-supreme-court-pens-ode-to-driving-a-stake-into-bond-s-zombie-bell-corporation-20201001-p56145.html?ref=rss&utm_medium=rss&utm_source=rss_national

2020 hindsight: how the AFL found a way through the season

The slice of history awaiting Panthers at top of NRL mountain

'You're seeing the results': How Hughes made success of succeeding Cronk

My way then the highway: If this is the end, it's a grand finish for champions of their codes

WA in ‘no rush’ to reopen border

‘He’s a s***head’: Whittaker opens up on secret UFC rivalry

It's Richmond v Geelong in Brisbane, but fans try to make the best of it

'Painful, agonising and kind of amazing': Aussie chefs in London fed a moving feast of restrictions

Anti-lockdown protesters clash with police at Shrine of Remembrance

Aussie legend: It’s who we are as a country

The end of democracy? If Trump loses, Trumpism still wins

Progress on bringing Australians home offset by others joining waitlist

How Winx made Waller fall in love with Cox Plate

Mug’s revenge: Finally a Pandemic worth cheering about!

Boom Sydney recruits on why they chose the Thunder

ASIC scandal expense puts chairman and deputy in the gun

ASIC expense scandal puts chairman and deputy in the gun

Premier gave $40,000 from her discretionary fund to Daryl Maguire's electorate

'Don't read too much into it': Roosters brush off underdog claim by Broncos before grand final

'Don't read too much into it': Roosters scoff at underdog claim by Broncos before grand final

'What did he take?': nurse gave overdose drug to inmate dying of asthma

'The idea was always to intervene': Sacha Baron Cohen on that Rudy Giuliani scene

'It was terrible work': 20 years on, horses' cull still a bitter political issue

One bridge I could never burn, no matter how hard I tried

NRL grand final: A moment to savour for all sports fans

Best bets: Why the Tigers will win a close Grand Final

Tee off at a world renowned golf course for $10m

A tale of two coaches: A greater legacy awaits either Scott or Hardwick

Ablett and Dusty: behind the great unknowns

Poll Call: Qld will work to have borders open by Christmas

From farm to new estate in two weeks

How the iPhone 12 compares to Google and Samsung's latest phones

Cats will need to prise flag from Richmond's grip: Selwood

Notes on a scandal: How Penrith pulled themselves back from the brink

Digging into the sodden mud of the Fens

Hammer hits the right spot with a tale of corporate crime

Here comes Martin, but has something gone Amis?

What's the story with women and the Nobel prize?

Over 10 years, Sydney has lost much. But have we become kinder?

No sculpture at Bondi? Manly, Wollombi and Mudgee offer a fix

The Boys is a brilliant takedown of Marvel, DC, and our need for supermen

Ask a Reporter: Are there restrictions on canvassing at polling stations?

We aren't family: the adults 'divorcing' their parents

Nathan or Ivan? Which Cleary is the most important to Penrith

Please Explain podcast: Why is the government investigating Australia Post?

'Back to square one': despite cries for change, Hariri tapped to lead

AFL grand final 2020: Gabba finale the fairytale of a season to celebrate

Magic Wand out of Cox Plate