London: Up to half of the populations in countries including the United States, Germany and the Czech Republic say they may decline to take any new coronavirus vaccine that is developed.

A vaccine is seen as possibly the only way for the world to return to normal after the pandemic. However, experts estimate that at least 70 per cent of people will have to receive a vaccine in order for it to stop coronavirus, a figure that appears to be some way off based on the latest polls. 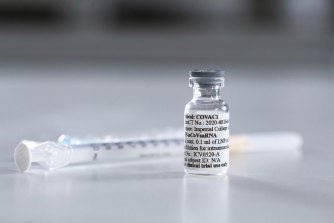 A COVID-19 vaccine candidate being developed by scientists at Imperial College London.

Professor Heidi Larson, anthropologist and director of the Vaccine Confidence Project at the London School of Hygiene and Tropical Medicine, said: "It's going to be a challenge, particularly because in general, populations are more anxious about new vaccines and that's understandable."

In the US, a number of polls have shown only around 50 per cent are committed to getting a vaccine. Last week, Dr Anthony Fauci, its leading public health expert, told CNN he believed the US was "unlikely" to reach herd immunity as a result of this, inspired by the "general anti-science, anti-authority, anti-vaccine feeling".

In Germany, a poll by YouGov found only one in two people would definitely get vaccinated if there was a jab available, and one in five said they definitely would not.

The picture is similar in other nations, and has been linked in part to the influence of the so-called anti-vaxxer movement, whose efforts to persuade parents not to immunise their children against diseases like measles have allegedly caused major outbreaks in the last two years in countries including the US, the UK and the Czech Republic.

Dr Jiri Cerny, a virologist at the Czech University of Life Sciences in Prague, said mandatory vaccination should be considered.

"It is probable that even if a high-quality vaccine is available, the number of people who get voluntarily vaccinated in Czechia will be rather low, which is not sufficient to develop herd immunity," he said.

Lautaro Martinez: we will Continue to do everything possible for Inter
Albert Ferrer: Barca need to become independent of Messi. Others should play more
Conte on rumors about Juve: I will sue whoever wrote this, as well as the editor-in-chief of this newspaper
Aubameyang on the failure of the FA Cup: That's how we do it
Manchester City remain Interested in Coulibaly and Pau Torres, despite ake's transfer from Bournemouth
Up to 10 players will leave Chelsea this summer. Among them are Kante, Kepa and Marcos Alonso
Sancho has agreed a 5-year contract with Manchester United. The clubs are at an advanced stage of negotiations
Source https://www.smh.com.au/world/europe/anti-vaxxer-movement-casts-doubts-on-whether-covid-vaccine-would-succeed-20200705-p5595e.html?ref=rss&utm_medium=rss&utm_source=rss_feed