It's probably not quite how Claude Monet, Camille Pissarro or Margaret Fleming expected their art works to be displayed. But Joel Andrianomearisoa hopes the unseen might just offer new ways of seeing.

The Malagasy artist has used sheer black veils to cloak the work of some of the masters of Australian and European art at the Art Gallery of NSW.

Mr Andrianomearisoa has draped two archways and 12 paintings – including Monet's 1887 Port-Goulphar, Belle-Ile; Pissarro's Peasants’ Houses, Eragny and Fleming's 1895 The Cockatoo – in the gallery's Grand Courts as part of his installation for the Biennale of Sydney. 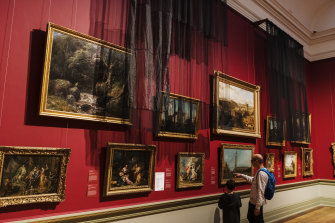 Like the gap between the veil and the painting, Mr Andrianomearisoa's work exists on the boundaries of established European art history and contemporary art, the past and the present. Installed in the oldest wings of the art gallery and resisting any easy categorisation of style, location or chronology, the "fabric interventions" also rethink the rituals of museum spaces.

Mr Andrianomearisoa said his work, titled There Might Be No Other Place in the World as Good as Where I Am Going to Take You and consisting of 1780 square metres of fabric, was intended to encourage viewers to think outside the frame. 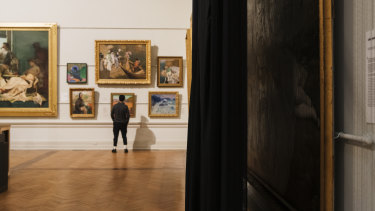 Artist Joel Andrianomearisoa's There Might Be No Other Place in the World as Good as Where I am Going to Take You.Credit:James Brickwood

Mr Andrianomearisoa visited Sydney last year to help select the paintings that he veiled, the oldest of which is Giulio Cesare Procaccini's 1618 oil painting The Dead Christ on the Cross with St Mary Magdalene, Augustine and Jerome, and Angels.

The installation also extends to the Museum of Contemporary Art, where Mr Andrianomearisoa has hung fabric to create a "labyrinth in which visitors could get lost".

While at first he was concerned that visitors would be disappointed if they visited the AGNSW only to find key works covered up, the response surprised him.

"Some of them found it actually funny because some of them opened the veils. In the museum, most of the time you can't touch anything so they found it kind of funny to reveal for themselves the paintings," he said.

Isobel Parker Philip, AGNSW's senior curator of contemporary Australian art, said the installation offered a chance to critically engage with the past and introduce contemporary concerns into the stories told about history.

"The project serves as a poignant reminder that Gallery collections, and the stories they tell, are not stagnant. Curatorial work needs to always be attentive to the complexities of art history and should seek to challenge and question established ideas and hierarchies, not simply perpetuate them," Ms Parker Philip said.

The Art Gallery of NSW's Biennale of Sydney exhibition runs until September 27.

Bartomeu does not intend to retire after 2:8 from Bayern
Bayern punished Barcelona for an 8-man defense. In this match, Messi was the problem, not the solution
L'equipe put Setien one for 2:8 with Bayern. For the first time, such an assessment was received by a coach
Pozornik! Barca fans met the team at the hotel after 2:8 from Bayern
Bayer's CEO confirmed that Havertz wants to leave the club
Destruction of Barcelona - in gifs from Tiktok Davis. This is better than highlights!
Messi can leave Barca if there are no changes at the club (COPE)
Source https://www.smh.com.au/culture/art-and-design/art-installation-lifts-the-veil-between-the-past-and-present-20200710-p55axu.html?ref=rss&utm_medium=rss&utm_source=rss_feed