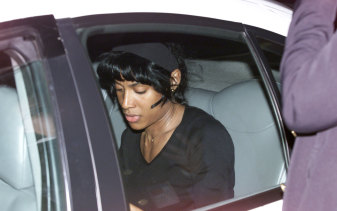 Marie-Jose Perec leaves Sydney in a taxi prior to her scheduled race.Credit:Brendan Esposito

High drama at the Sydney Games! French runner Marie-Jose Perec, the great rival of Australia's world champion 400m star Cathy Freeman, has fled the city just two days before she was due to take to the track at the Olympic Stadium.

Perec's agent sensationally claimed she was threatened in her hotel room. She had already said she felt like a hostage in her room given the intense media interest in her presence in Sydney and did not attend an official French team media event earlier.

Her former coach, Francois Pepin, said last week that Perec was "egocentric" and doubted her claims about being harassed at her hotel. Freeman had asked the media to leave Perec in peace and now she has simply left, leaving Australia's champion with the world at her feet.

It was a strong start for Daniel Green, the 27-year-old from WA, as he began his Olympic tournament with a first-round light heavyweight victory over Brazil's Laudelino Barros at Darling Harbour.

He's a big puncher. But I've got a chin of stone.

It was a cakewalk, as well. Green dominated from the opening exchanges and the scores were 17-2 when the referee put an end to proceedings.

He's got an aggressive style, does Green, and might be well suited to the pros when he makes the inevitable move. "He's a big puncher," Green said. "But I've got a chin of stone."

Tough work for Ferris at the track cycling

Michelle Ferris has missed a medal in her favoured event, the sprint. Ferris lost the chance to ride-off for gold when beaten by arch-rival Felicia Ballanger, before losing the bronze medal race to Iryna Yanovych from the Ukraine.

The 23-year-old from Victoria was disappointed but put on a brave face. She already has a bronze medal in Sydney after the 500m time trial, with Ballanger taking the gold in that event before going on to win the sprint as well.

"I don't know what it was," Ferris said. "I had nothing in my legs today."

In other results, Stuart O'Grady finished out of the placings in the points race.

Silver for Mark in dramatic finish to the shooting

Defending double-trap champion Russell Mark has won silver but it could so easily have been another Olympic gold after the Atlanta champion lost a shoot-off to Richard Faulds from Great Britain.

Mark had a three-shot lead with five braces of targets left in the competition, before missing targets on his 20th and 21st shot, then missing both the next time around, to allow Faulds back into the reckoning. They ended locked on 187 before Faulds had the better of the Australian in the shoot-off.

Mark said he may have been guilty of thinking he was almost over the line, given the size of his lead with just a handful of targets to go. But he tensed up as the wind rose, and the rest was history.

"Missing the pair was like someone winded me. I was just amazed," Mark said. "And for the first time today, I had some negative thoughts."

Mark may have not lived up to his own lofty expectations but he showed what a good bloke he was when sections of the crowd started cheering the misses of his rival Faulds. Mark told them to keep it down, something that did not go unnoticed by the Brit.

Ice runs through the veins of South Australia's Simon Fairweather, our latest Olympic hero who has won gold in the archery. It's the first medal of any colour for Australia's Olympic archers.

The 30-year-old was ruthless at Homebush. He won three straight to book a spot in the gold medal clash with Victor Wunderle and it was all over by the time the American had one arrow left to shoot.

"I'm speechless," Fairweather said as he tried to digest it all in front of 4500 fans, who probably weren't expecting an Australian gold when they put in their request for tickets. Now they had witnessed a moment they are unlikely to forget in a hurry.

Fairweather's goal before the Games was to make the top eight. Instead, he swept aside all in his path to join the local gold rush in Sydney.

Australia's star guard Michelle Timms was out of action with a vomiting bug but that didn't stop the Opals putting the cleaners through Slovakia at the basketball, with the host nation cruising to a 70-47 win on the back of 15 points from Lauren Jackson.

Timms was quarantined from the rest of the squad but those suiting up showed no ill-effects as they blew away the Slovaks, who quickly became frustrated and ended up shooting a dismal 29 per cent from the field. Gold medal favourites the USA were impressive in their 88-77 victory over a competitive Russian side.

The Hoogenband strikes up once again

Pieter van den Hoogenband's golden Games continue to glisten even brighter. After victory in the 200m freestyle, the Dutch star has dethroned the great Alex Popov to win the 100m freestyle and end the Russian's dream of a hat-trick of Olympic titles in the event. 'Hoogie' has become the giant-killer in Sydney, taking down Ian Thorpe in the 200m free and now Popov. The Russian took silver with the USA's Gary Hall jnr in third. Michael Klim, who briefly had the world record for this race after his sizzling relay lead-off, missed the placings.

Madame Butterfly has her wings clipped in major upset! 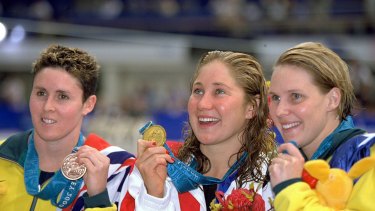 Nobody would have seen this coming. Susie O'Neill, already a gold medal winner in Sydney in the 200m freestyle, looked as good a thing as there could be in her pet 200m butterfly, a race she has owned since before the Atlanta Games of 1996. Instead, it was American Misty Hyman who touched first in a result she could barely comprehend, let alone the pro-Australian crowd who expected a coronation for one of their favourites.

It was a brilliant swim and only O'Neill, who has not lost this race at a major meet for more than six years, has ever gone faster. The American won fair and square and was elated. "This moment is so sweet," Hyman said. "This is a dream come true."

O'Neill battled ferociously to take silver ahead of Dolphins teammate Petria Thomas, who walked away with bronze. 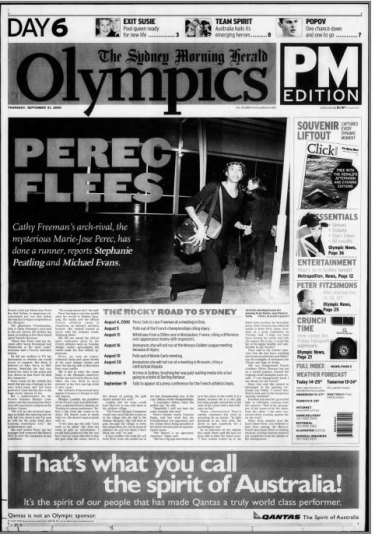 How the Herald reported Perec's dramatic exit from the Games.Credit:Sydney Morning Herald

Pirlo about 1:1 with Verona: Juve do not need a slap in the face to Wake up and play intensely
Everton and Liverpool in the top 2 at the end of the round in the Premier League for the first time in 27 years
Arteta about 0:1 with Leicester: I Don't know why the hell our goal was canceled. It is difficult to create space when 10 people are sitting behind the ball line
Rodgers on 1-0 with Arsenal: Leicester deserved to win. Vardy is a world-class player
Juve without Ronaldo could not beat Verona and Crotone in Serie A
Vardy has scored 11 goals in 12 games against Arsenal in the Premier League. Only Rooney has more
15,000 Teddy bears were planted at the Heerenveen match as part of a campaign to fight cancer. Toys sold for 230 thousand euros
Source https://www.smh.com.au/sport/as-it-happened-freeman-s-race-rival-does-a-runner-20200918-p55x1e.html?ref=rss&utm_medium=rss&utm_source=rss_feed