As we re-emerge from lockdown, a city begins to stir

Taking a “mental health day” used to mean throwing a sickie to stay at home; the equivalent measure these days is skipping home for the office, as I did on Thursday.

It wasn’t only cabin fever. It was research for an obituary about the death of cities. I wanted to observe Melbourne’s post-apocalyptic CBD where foot traffic’s down about 40 per cent. 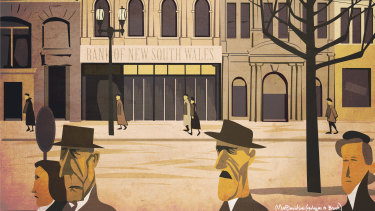 On the city-bound tram the handful of passengers were distanced and spaced-out in every sense. Behind a surgical mask my breath felt laboured. This is what our journey out of hibernation will look like; fitful and wary, and unlike the grizzly bears in north America, we’ll be coming out for winter.

I can report the flow of cars on Swanston Street is anaemic. Fed Square, a halfway proposition at the best of times, a morgue – though, thank God and good governance, not literally. The orange-vested workers milling about at the Metro Tunnel construction site watched idly as I walked by, humans in the city still something of a curiosity.

The Metro Tunnel project is itself an echo of a lost civilisation. Of a time when the prime minister blamed crowded trams on international students, back when there were international students instead of a $500 million revenue hole for Melbourne University. A time, long ago, in October last year, when data showed nearly 10 per cent of Melbourne morning and afternoon peak-hour commuters were travelling in overcrowded trains. Packed in like sardines, especially on the Craigieburn line. 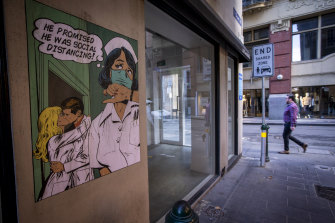 The Public Transport Users Association urged authorities to run more trains in off-peak to spread passenger loads through the day. Now they say we’ll need extra train services to stop the spread of COVID-19; people will be working staggered hours and days. What frightens me, and some urban affairs experts, is that should the shift to working-from-home become permanent, public transport will become unviable, vulnerable to funding cuts and brakes on investment.

Office buildings will come to resemble those King Street nightclubs, which won’t be snapping back for some time. (I know, silver linings.) Queues at the entrance. Bouncers at the lifts. Only difference is they’ll screen for body temperature rather than general coolness.

In Flinders Lane I found my customary coffee roasters shut and stripped bare. Sawing and sandpapering going on inside. Please God let this be refurbishment and not the undertaker at work. Degraves Street, usually pumping with cafes, was mostly boarded up. A strange sense of disorientation came over me. I aborted my journalistic mission and headed back to the office.

“At least the amplified buskers are gone,” said my co-working mate, Nigel. “They were so bloody loud.”

But lose the city, and risk losing a better society. In Sweden, at the turn of the 20th century, unions acquired communal spaces so that workers could enjoy gardens, dance halls, theatres, zoos, restaurants – and free speech and protest.

Known as the People’s Parks and People’s Houses movement, it bequeathed to Sweden’s public a park where Frank Sinatra and ABBA would play gigs, and a culture that helped spawn the country’s signature social democracy. Writing this week in Places journal, three scholars argue we should learn from this under-appreciated chapter of Swedish history at a time when social distancing “makes us realise the immeasurable value of collective solidarity and public assembly.” 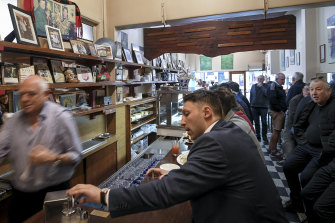 I’ll try to “reimagine” the Melbourne in the city council’s blueprint: a restored Melbourne Town Hall, a revamped Queen Vic Market, fewer carparks, 12 kilometres of pop-up cycling lanes. I’ll keep faith that Melbourne will emerge from hibernation, even cooler than its old self, as cool as Copenhagen or Berlin before they too retreated under the doona.

But I’m still in the “depression” stage of Elisabeth Kubler-Ross’ five stages of grief. Mourning for the cramped warmth of Pellegrini’s. For steamy dumpling restaurants on Russell Street. Post-footy crowds that don’t leave you guessing who won. Snaking queues for groovy restaurants and film festival blockbusters.

The city is a living thing no virtual world can replicate. It can be alienating, or film noir would never have been created. It can also be a salve for the lonely and heartbroken; self-absorption dissipating with the sheer spectacle of humanity, striving and jostling.

This column nearly finished, I elbowed the lift button. In the lobby, I lathered on hand sanitiser. It was dark outside. Peak hour had come and gone in stealth, without the usual clamour and hum that punctuates the day. A quiet city, I realise, is a shapeless city. Rain started. A hooded figure waited alone at the tram stop. I hesitated a moment, then caught a cab home.

Julie Szego is a regular columnist.

Agent: in 2018, Lautaro could have moved to Roma for 8 million euros, but they refused
Shevchenko will extend his contract with the Ukrainian national team for 2.5 years
Flick about Havertz in Bayern: Few people will not want to see him in their team
Liverpool were evaluated by Werner above Sancho and Caverta. Klopp personally informed the player about the disruption of the transfer (the Athletic)
This is ridiculous. Sancho reacted to the haircut penalty and then deleted the tweet
Barnes on Werner at Chelsea: if Klopp really wanted him, Timo would have chosen Liverpool
Klopp on Liverpool players taking a knee: I was proud of. This is an important message
Source https://www.smh.com.au/lifestyle/life-and-relationships/as-we-re-emerge-from-lockdown-a-city-begins-to-stir-20200522-p54vi9.html?ref=rss&utm_medium=rss&utm_source=rss_lifestyle

‘Tyranny of cash’: Australian vows to clean up weightlifting

Kearns, Gallop among names in frame for rugby hot seat

Australia could be poised for boom in Hollywood production, says Ausfilm boss

After his own troubling run-ins with police, Indigenous director offers hope with documentary

'I lived with a lot of denial': former politician Michael Yabsley's new life

How technology will redefine the region post-virus

Take a number: the rules of synchronised, socially distanced swimming

'It gets ugly': Universities brace for major reform to save research

Black Lives Matter Rally: An important issue but a rally is too dangerous

'Incomprehensible': How Rio Tinto reduced 46,000 years of history to rubble

Heritage gem emerges from the rubble

Making the most of a 90-minute seating is thirsty work

Your Daily Horoscope for Saturday, June 6

When I look at America torn apart, I see my own family and Australia's history of racism

Business group lays out its wish list of reforms

I wanna be a celebrity, a regular household name

$721 million robo-debt refund must be sped up, lawyers say

Is anyone flying? Melbourne Airport passenger numbers at record low

'We thought three years of work was down the drain': how NGV saved the show

Curse of the Pharaoh: Sydney's summer of blockbusters is over

‘America is finished if campaign to bring down Trump succeeds’

NRL 2020 as it happened: Munster magic the difference as Storm topple Souths

Snitz poised to get the job Dunn

‘Up yours’: Storm star’s perfect timing

Fiction reviews: Romance in Marseille and three other titles

From degustation to delivering lasagnes: how Ben Shewry's crash-tackled a crisis

From degustation to delivering lasagnes: how Ben Shewry crash-tackled a crisis

Rise up! My sourdough baking hell

Gourmet-geared gifts for your favourite foodie

Poh Ling Yeow: 'I’ve always been very greedy – not for money, but for life experience'

Exciting Times a reminder of how fraught relationships can be

My pandemic pantry: the surprising items that became essential

‘Not over til no virus in the world’: WHO

Car maker Bentley to cut up to 1000 jobs