London: The mother of Julian Assange's children is seeking Australian citizenship for their sons and has called on Prime Minister Scott Morrison to promise the family would be safe to live in Australia if the WikiLeaks founder escapes being extradited to the United States.

Speaking exclusively to The Sydney Morning Herald and The Age, Stella Morris said she would love to live in Australia but that the family would only live in a country where their safety could be guaranteed. 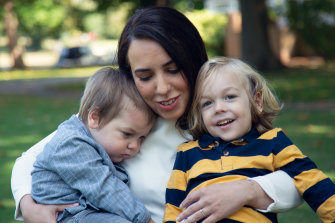 Stella Morris with her kids, Max, 18 months, and Gabriel, 3, in London.Credit:Liliana Zaharia

Morris said she planned to wed Assange by Christmas outside Belmarsh Prison on London's outskirts, where the 49-year-old is in remand while he fights his extradition to the US.

The pair conducted a secret relationship inside the Ecuadorian embassy beginning in 2015, four years after they first met. At the time the Swedish-speaking, South African-born lawyer ha joined his legal team to help fight his extradition to Sweden, where he was accused of sexual assault.

The pair had two children — Gabriel, 3, and Max, 18 months — keeping their relationship and growing family a complete secret to the outside world until earlier this year.

Morris said she and Assange had thought having a family together would be impossible but began dreaming of the idea and finally pursuing it after former US president Barack Obama pardoned Chelsea Manning, the former soldier and whistleblower who was convicted of espionage. 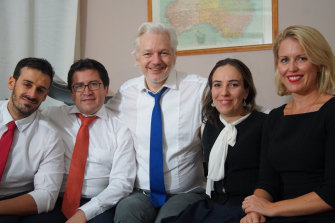 "The trajectory was that he [Julian] would be free and also the Department of Justice had announced that it would not prosecute him for the Manning disclosures," she said.

"It was a rational decision, I was 33 at the time and I knew I wanted children and it was faith in our love for each other and the certainty, a feeling that this was right."

But while the children speak to Assange daily, they have never known life with their father at home.

Morris knows that there is now the possibility her sons will not see their father again. They last saw him in prison about a month ago, the first time since March. 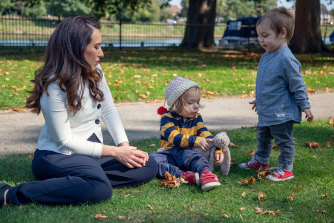 "I tell my kids that Julian’s a hero and I make him very present, we watch videos of him, they’ve been to the prison."

"I don’t want Julian to become a martyr. We’re a family, he’s not a symbol to us. He’s part of ... he’s Daddy. So I just tell them that Daddy’s coming home."

The family's hopes of a life together plummeted on April 11 last year, when Assange was sensationally arrested at the Ecuadorian embassy in Knightsbridge, after his hosts of seven years terminated his political asylum.

British police were invited into the embassy to arrest him for skipping bail in 2012 when he first sought asylum.

The images of Assange being dragged out of the Knightsbridge enclave looking years older with an overgrown straggly grey beard, moustache and long hair, shocked the world.

"He had wanted to shave for days," Morris recounts. Assange, knowing his time inside his diplomatic fortress was coming to an end, had requested a razor to shave and asked for a hairdresser but his hosts denied both pleas.

"He was aware that if he came out soon, he wanted to look good because he knew he would be dragged into court and people would see him.

"He's very unhappy that that is how the world saw him for the first time in many months," she says.

Denying Assange the chance of some personal grooming before he was dragged out was a foretaste of how the relationship between guest and hosts had broken down. 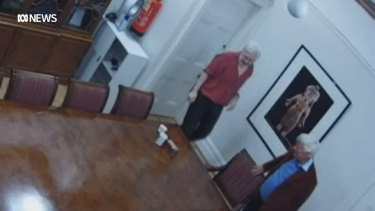 Inside the Embassy of Ecuador in London, where Julian Assange was based.Credit:ABC

No sooner had Ecuadorian President Lenin Moreno evicted the embassy's rent-free tenant, did he turn on Assange, telling the BBC that the Australian had become unmanageable even smearing his own faeces on the walls in the time leading up to his arrest.

"It never happened," Morris says of the claim. "It’s outrageous what Ecuador put out and the whole faeces story is an absolute lie."

"It's the most predictable and nasty, dirty, smear - literally a smear."

The Ecuadorian embassy in London refused to comment. No video evidence to back the claim has ever been provided, despite Assange's quarters being under video surveillance.

The dramatic expulsion of the eccentric hacker may have always been predictable, given the long line of people who have worked with Assange and left with a bitter tale to tell.

But this too, Morris says it a myth.

"He's very direct and he's opinionated and so, yes, he has disagreements with people but he also has lots of friends, lots of people who have stood by him, people who like to argue with him and don't get their feelings hurt because it's an intellectual exchange.

"There's another aspect which is Julian is an unusual character. So he's a bit difficult, people don't get him at once. I always found him very intriguing but I think, having understood and met people with Asperger's, it's clear to me that he has Asperger's."

Assange's health has often been cited as a factor by his legal team in opposing his detention and extradition.

The United States has sought his extradition and wants to put him on trial on 18 counts of violating the Espionage Act. The charges relate to the publication of more than half a million unredacted military and diplomatic cables on the WikiLeaks website a decade ago.

"They're going to pluck him out of the UK and put him in the deepest, darkest hold of the US prison system. They want to bury him alive and for him to never be able to speak again or work again or see his children," Morris says.

Assange is arguing that his prosecution by the Trump Administration is political and that extraditing him to the US would violate his human rights.

'People say he's an anarchist. He's not. It's the opposite, he's almost like a democracy extremist.'

Morris says Assange is not losing hope because he is driven by his desire to uphold freedom of speech through "whatever means possible".

"People say he's an anarchist. He's not. It's the opposite, he's almost like a democracy extremist," she says.

The US argues that Assange is not a journalist because he allegedly coached Manning into breaking the law to steal the cables, including hacking a password hash, to conceal Manning's tracks.

But Morris says just one of the 18 charges relate to computer intrusion and it carries just five years jail, compared to the 175 years Assange faces if the maximum sentence were awarded.

"When you break it down in terms of the years that he faces, the true nature of the case comes forward," she says.

Asked if Assange's team has asked presidential candidate Joe Biden to drop the case if the Democrats prevail in the November election and oust President Donald Trump from the White House, Morris says: "I don’t want to go into..." before trailing off.

But she says it will be "hard for Biden not to drop it" given he was Obama's vice-president.

But what if Assange prevails in court? Is a peaceful life even possible for the Assanges?

"I'd love to go to Australia, I'd love to live in Australia," she says, joking that Assange enjoys teasing her — an arachnophobe — about the spiders.

"I'll live wherever he is safe and that's why I want Australia to tell us that he will be safe there.

"I want to take my children to Australia and I want Julian to show them Australia."

The Department of Foreign Affairs and Trade confirmed last year that it had issued Assange with a new passport but Morris said this was not enough.

"They haven’t said they won’t protect him from extradition and frankly it’s been very disappointing."

But she said she feared it was part of a widespread pattern of increasing attacks on free speech across the Western world that had ensnared her fiance, describing the raids on the ABC's offices over a national security report it published, as "frightening".

"This is not something that the Australian government can just hide its head in the sand and say 'nothing to do with us'."

Rashford with 4 goals led the race of scorers of the season Champions League
Holand scored the most goals (12) in the first 10 matches in the Champions League
Pirlo about 0:2 with Barca: this match will help Juventus grow
Griezmann did not make any effective actions in 6 matches under Koeman
Ole Gunnar Solskjaer: Leipzig made Manchester United work hard. Rashford had a big impact on the game
Roberto victory over Juventus: the Best response to the unrest in Barcelona - it's a game
Ronald Koeman: Barcelona played their best match of the season against Juventus. We had a lot of chances
Source https://www.smh.com.au/world/europe/assange-s-fiance-asks-scott-morrison-to-guarantee-family-s-safety-20200921-p55xhz.html?ref=rss&utm_medium=rss&utm_source=rss_feed