Attorney-General Christian Porter had a win of sorts on Thursday when the Maritime Union of Australia agreed to press pause on industrial action against Sydney port operator, Patrick, until the end of the month.

But an appeal sent out to industry from behind the scenes shows just how well-prepped the Attorney-General and his department were to escalate the battle if the impasse over the port operator's enterprise bargaining agreement continued with the MUA. 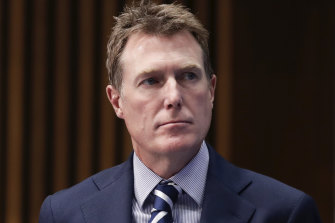 On Wednesday, International Forwarding and Brokers Association of Australia chief executive Paul Damkjaer appealed to members with a call to arms – of the bureaucratic variety.

"Today I have been contacted by the office of the Attorney-General requesting information on the impact the Sydney ports issue is having," Damkjaer wrote. "The Attorney-General's office would appreciate a letter or an email from your clients which/who are being impacted or who are concerned about the effects of the ongoing industrial action."

Letters sent needed to include specifics regarding costs incurred, delays and knock-on effects the industrial action has caused to members' clients, Damkjaer said.

He also included the reminder: "Your client would need to be comfortable with the letter potentially being submitted as evidence to the Fair Work Commission in the event the Attorney decides to intervene in support of terminating industrial action."

Porter, luckily, didn't need to take the nuclear option of relying on the Fair Work Commission to terminate the MUA's proposed action. But it's nice to know the A-G's department now has its ducks in a row if it needs to take the FWC route in a month's time.

Either way, government moves to work so closely with shipping bosses over the wharfies heads can't come as a pleasant surprise to his "BFF" ACTU secretary Sally McManus, who Porter has been relying on to help salvage broader industrial reform talks, which so far have stalled. Another union official said they were happy to finally witness the government's industrial relations sausage-factory in action.

"We'd never seen one of these letters get out, we assumed [the minister's office] always just called the bosses," one union leader said. 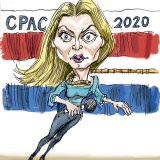 Canadian alt-right YouTuber Lauren Southern has been quietly punted from the speakers list at next month's Conservative Political Action Conference.

The event – regarded as Woodstock for the Sky After Dark crowd – kicks off in Sydney on November 4, just in time for the US election.

The Institute of Public Affairs, which sponsors the event, is among those who raised concerns about Southern's inclusion. A number of federal MPs scheduled to appear and other interest groups had also flagged concerns.

"A lot of people that support CPAC and want the event to succeed thought it was inappropriate for her to be there," one source close to the event told CBD.

Southern, who has moved to Sydney, appeared in a widely-circulated photo making a "white power" hand gesture to white supremacists including members of the neo-Nazi group Antipodean Resistance. Others understandably regard Southern's views on the "Great Replacement" conspiracy theory, that warns of white genocide, to be abhorrent.

Officially, COVID-19 event restrictions have forced event organiser Andrew Cooper to downsize the event into one room from two with knock-on effects on the speakers list.

The IPA declined to comment. Australian Jewish Association president David Adler said he had been reviewing his position on the conference but space restraints and Southern's removal from the line-up meant it became a "non-issue".

Cooper said he had been made aware of some attendees' concerns.

"Some questions were asked [about Southern's inclusion], but it wasn't just about her," Cooper said. "Space meant we dropped about half a dozen."

Did anyone else who received complaints get the chop? "Maybe not," Cooper said.

Props must go to the headhunters at Boyden Executive Search who are hard at work filling one of the city's very hard-to-place positions.

Readers will no doubt recall some of the $60 billion government agency's more recent challenges, including an $800 million loss in the last financial year, a bigger loss forecast for the current year, as well as near wholesale turnover of its leadership team after revelations former MD John Nagle handed a contract to a business owned by his wife. Oh, and there's a referral to the state's anti-corruption commission still under consideration. Yes, messy.

But it's great to see Boyden is taking the glass-half-full approach to the position, spruiking the gig as a "career-defining leadership challenge" requiring a "tenacious and resilient" professional to get the job done. Other requirements? Well developed skills in "managing a complex stakeholder ecosystem" and demonstrated track record in "transformation and value alignment". Whatever that means. But at least they got the challenge bit right.

Salary? The headhunters aren't prepared to say yet.

Lucescu on the Juventus defeat: Maybe 0:2 is a lot for such a match. We played very well
Pique may miss the match with Juventus due to removal in the game with Ferencvaros
Gnabry contracted the coronavirus. Bayern play Atletico tomorrow
Fati is the first in the history of the Champions League to score 2 goals under the age of 18
Messi scored in the 16th consecutive Champions League season and repeated Giggs' record
Bruno did not score a PSG penalty at the first attempt, but the referee asked for an Interruption due to Navas' exit from the goal line
Koeman is the fifth coach to manage 6 teams in the Champions League
Source https://www.smh.com.au/national/attorney-general-readies-the-big-guns-for-port-industry-warfare-20201001-p5616n.html?ref=rss&utm_medium=rss&utm_source=rss_national