An Auditor-General's report into a controversial water buyback scheme in the Murray-Darling Basin found the federal Water Department did not ensure value for taxpayers' money in the $190 million program, but did not find any legal breaches in the so-called 'watergate' deals.

The report on the government's purchase of water rights from private irrigators from 2016 to 2019 found the department "did not use a value for money approach for procurement" of water rights, and only ensured it recovered the required volumes and did not pay above market price. 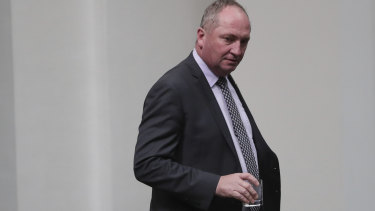 Under the Basin Plan specific water recovery targets were set catchment by catchment to return water to the environment and boost the health of river systems.

Buybacks began under open tenders in 2008 and irrigators offered their water rights for the Department to buy. Voluntary offers started to dry up in 2016, so to ensure it met its targets the federal government began a $190 million program where it actively sought out deals. By 2019 it had purchased about 80 billion litres of water across eight catchments.

The Auditor-General said the department did not seek multiple offers for water in each catchment, and it "did not negotiate the price for the water entitlements it purchased in all but one instance".

The most controversial buybacks were in 2017, in the so-called 'watergate' deals worth $80 million with Eastern Australia Agriculture, in Queensland's Condamine Balonne Catchment.

The department bought 28 billion litres of entitlement to harvest overland flows, which occur when a river breaks its banks or rainfall floods across the landscape, from Eastern Australia Agriculture.

It was claimed at the time the entitlements were "ghost water", as the water could be captured in dams on other properties.

The buybacks were executed under then-water minister Barnaby Joyce, who faced criticism because the parent company Eastern Australia Irrigation was domiciled in the Cayman Islands, a known tax haven, and recorded a $52 million profit from the sale. 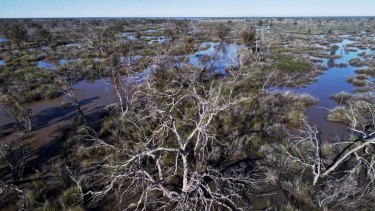 Narran Lakes in May 2020, which has had the biggest inflow since 2013.Credit:Nick Moir

The Commonwealth Environment Water Holder, Jody Swirepik, who manages the water recovered under the Murray Darling Basin Plan, told The Sydney Morning Herald and The Age good rainfall in February and March had delivered 90 billion litres of water to Narran Lakes, enough to restore vegetation and potentially support bird breeding next year.

Of that 90 billion litres, 32 gigalitres came from the Eastern Australia buyback.

"This is the most water to reach the Narran Lakes since 2012. We are thrilled to see nature gradually bouncing back to life in such an important part of Australia," Ms Swirepik said.

Federal Water Minister Keith Pitt said while the report confirmed "there is no suggestion of any wrongdoing" by the department, he had directed it to address issues identified in the report.

The Department has agreed with the Auditor-General's recommendations to improve its performance.

The watergate scandal featured during last year's federal election campaign, with speculation over Energy Minister Angus Taylor's role in the deal with Eastern Australia, where he was co-director until 2013 when he was elected to Parliament.

Mr Taylor ended his role with the company prior to entering Parliament. He learnt of the buyback after it had occurred and did not receive any benefits, he has said.

Valencia presented three uniforms for the 2020/21 season
Ter Stegen agreed to sign a 5-year contract with Barca
Bale was not included in real's bid for the match with Manchester City in the Champions League
Arsenal have offered Willian a 3-year contract
Aurier agreed to move to Milan. Tottenham want 20 million euros for a defender
Can-Casillas: One of the greatest is leaving the stage. You have always been an example, my friend!
Atletico President: Simeone is great. He constantly brings victories and titles
Source https://www.theage.com.au/politics/federal/auditor-general-watergate-report-finds-buyback-scheme-didn-t-ensure-value-20200716-p55co6.html?ref=rss&utm_medium=rss&utm_source=rss_feed