Four top Australia Post executives flew to Brisbane to accompany One Nation leader Pauline Hanson on a guided tour of its new parcel facility at the same time the organisation was trying to win her party's critical vote in the Senate.

The red carpet treatment was rolled out for the Queensland Senator in July, 11 days after the Australia Post chief executive Christine Holgate threatened to call police unless the City of Melbourne delivered more than 100 One Nation-branded stubby holders to every apartment in a locked-down suburban public housing tower. 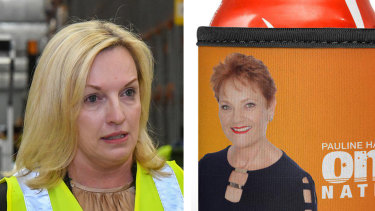 Ms Holgate was joined by Sydney-based HR executive Sue Davies, NSW/ACT and Queensland general manager Christian Jackson and community and consumer executive Nicole Sheffield, who all flew from Sydney to provide the tour. But the organisation said the federal government's temporary relaxation in daily postal services was not discussed.

In May the federal opposition announced it would seek to overturn the temporary relaxation in daily services in the Senate with the support of the Greens. The disallowance motion, which was later defeated in a vote Senator Hanson did not attend, needed four members of the five-person crossbench to succeed.

In written answers provided on Thursday to a Senate committee, Australia Post confirmed the attendance of the high-power quartet at the July 22 tour.

"The tour provided an overview of the facility. Senator Hanson did not receive a briefing in relation to proposed changes to Australia Post services during the visit."

Earlier that month Senator Hanson had sent 114 parcels to the residents of a North Melbourne public housing tower who she had labelled "drug addicts" and "alcoholics". They were subject to strict lockdown measures amid a COVID-19 outbreak. 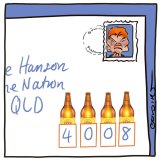 City of Melbourne officials overseeing distribution of food, medical supplies and mail at Canning Street, North Melbourne opened one parcel addressed "to the householder" of an unoccupied flat and decided against distributing the stubby holders. The paraphernalia would, sources said, inflame what was already an "emotional tinder box" within the tower following Senator Hanson's comments on the Nine Network's Today program earlier that week.

On July 11 Ms Holgate and her senior legal counsel, Nick Macdonald, said they would notify "the police or other relevant authorities" unless the stubby holders and a hand-written note that read "No hard feelings" were delivered "without further delay".

In its written statement to the committee, Australia Post said Senator Hanson's tour of the Brisbane facility was referenced in "commercially sensitive material" for a meeting on July 20 between Federal Communications Minister Paul Fletcher and Ms Holgate.

"The tour was not discussed during the meeting," it said.

The organisation said it regularly provided tours of its facilities to "representatives across all levels of government" and "similarly engages with representatives on a range of issues".

The federal opposition has demanded Australia Post chairman Lucio Di Bartolomeo and general counsel Nick Macdonald front the upcoming Senate estimates hearing along with under-fire chief executive Christine Holgate to face a grilling over a series of scandals that has engulfed the organisation in the past months.

Opposition communications spokeswoman Michelle Rowland said many Australians were frustrated with delays to parcel and mail deliveries resulting from the Morrison government's temporary changes to the service's delivery frequency.

"I'm sure they would much prefer Australia Post executives focus on improving service and supporting their workforce, than playing political games or threatening to call police over the delivery of stubby holders," Ms Rowland said.

Holand scored 11 goals in 9 matches in the Champions League
Lucescu on the Juventus defeat: Maybe 0:2 is a lot for such a match. We played very well
Pique may miss the match with Juventus due to removal in the game with Ferencvaros
Gnabry contracted the coronavirus. Bayern play Atletico tomorrow
Fati is the first in the history of the Champions League to score 2 goals under the age of 18
Messi scored in the 16th consecutive Champions League season and repeated Giggs' record
Bruno did not score a PSG penalty at the first attempt, but the referee asked for an Interruption due to Navas' exit from the goal line
Source https://www.smh.com.au/politics/federal/australia-post-gave-pauline-hanson-vip-tour-as-crucial-senate-vote-loomed-20201001-p5614g.html?ref=rss&utm_medium=rss&utm_source=rss_feed