The hammer went down this week to signal a record price paid for an Australian wine.

And it appears our appetite for the finer things in life hasn't dimmed in isolation, especially for those in the wine game. 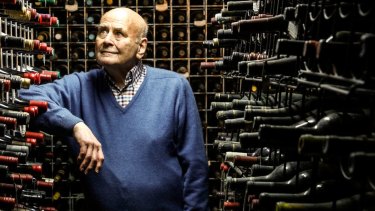 James Halliday in his private cellar at home, shortly before the record Langton's sale.

A Melbourne buyer purchased a 1951 Penfolds Bin 1 Grange for $103,000 this week, the highest anyone has ever paid for an Australian drop that eclipsed the previous record of $81,000 for the first vintage of Penfolds Grange.

"We've found our customers have been trading up during this period, and drinking better wine," Mr Salpietro said.

"They're milling around the cellar even longer, now they have a bit more time at home."

For example, customers who would normally budget to buy a variety from Leeuwin Estate's Siblings range for about $25 were upgrading to the Margaret River winery's iconic Art Series collection, starting at $40 for shiraz.

Our demand for fine wine has bucked the trend of retail's recent gloomy outlook and actually increased since restrictions in late March left many drinkers at home and unable to access traditional methods of consumption such as restaurants and cellar doors.

The retail sector was battered through the COVID-19 pandemic, with clothing, footwear and personal accessory sales falling 53.6 per cent for the seasonally-adjusted month of April, the Australian Bureau of Statistics said.

Langton's, which sold the record Grange this week, echoed Grand Cru's fortunes, reporting a 50 per cent increase in customers bidding online and a big bump in people buying from its website.

"New and existing clients have instead immersed themselves in the world of fine wine from the comfort of their homes," general manager Jeremy Parham said. 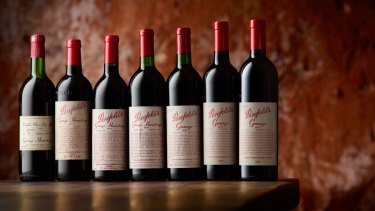 Penfolds Grange is Australia's most iconic wine, with one just sold for a record price.

The DRC, from Burgundy in France, is regarded as producing the world's greatest wines.

Head of auctions at Langton's Tamara Grischy said the company's two recent sale events showed demand for wine was as strong as ever.

"The 1951 Penfolds Grange truly represents the beginning of modern Australian wine," she said.

"The early 1950s Penfolds Grange wines are very rare, so collectors will snap these up when they can in order to complete their sets of every vintage of these incredible wines."

The Australian wine retailer sold 1092 bottles of Penfolds during its 'Rewards of Patience Auction' that closed Tuesday. A complete set of Grange from 1951 to 2015 was sold by in December for $372,800 by the auctioneer, which puts a 16.5 per cent buyer's premium charge on top of the hammer price.

Mr Salpietro, the managing director at Grand Cru, has bought prized Australian and international wines across excellent vintages for years and amassed a loyal client base, here and abroad, as his collection increased.

Halliday’s DRC collection of 252 bottles of pinot noir and chardonnay had a 98 per cent clearance rate at auction, with only six passed in and international buyers representing 35 per cent of sales.

In a mouth-watering prospect for wine geeks, investors and enthusiasts, Langton’s will auction wines from Halliday’s collection of Australian wines later this year.

Coca: The win over Liverpool had a good impact on us. It is not easy to beat the European champion and the Premier League twice
Giovane Elber: Lewandowski is better than Messi now. Lionel is a genius, but this year Robert is unattainable
The head of the Belarusian Tribune was detained in Minsk. Max, we're with you
Karl-Heinz Rummenigge: FIFA is seriously thinking about awarding the Golden ball. I want Lewandowski to win
One Barca player among those starting the pre-season has contracted a coronavirus
Malinovsky settled in Italy: after the quarantine, he scored against Lazio and Juve, ahead of Mertens, Higuain and De Ligt in the ranking of the best players in Serie A
City are ready to give Coulibaly a 5-year contract with a salary of 10 million euros. Napoli wants 80 million for him^. Manchester City are working on the transfer of defender Kalidou Coulibaly from Napoli
Source https://www.smh.com.au/national/western-australia/australian-drinkers-spend-up-big-buying-fine-wine-in-isolation-20200703-p558rh.html?ref=rss&utm_medium=rss&utm_source=rss_feed