The babysitter and woman who eventually married Christopher Michael Dawson threatened his first wife Lynette and had reason to see her killed, a judge has heard.

In the ongoing murder trial against Dawson, 73, an intercepted phone call between himself and his twin brother Paul from March 1999 was played to the court. 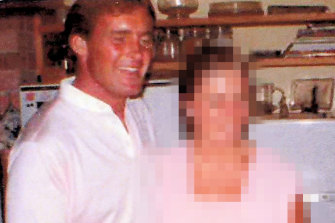 Chris Dawson and JC on their wedding day.

In that call, Paul Dawson is heard saying that the babysitter, known only as JC, had the motive to kill Lynette Dawson, who disappeared in January 1982.

“If Lyn had been murdered, (JC) had the motive. (JC) had more to gain and (JC) did gain more than Chris ever gained from their relationship,” Paul Dawson told the NSW Supreme Court.

Dawson has been accused of murdering his wife and disposing of her body in January 1982 so he could have an unfettered relationship with JC. He has pleaded not guilty to the charge and claims Lynette left home at the time due to marital issues and never returned.

Paul Dawson told Justice Ian Harrison that, at a birthday party for one of Lynette Dawson’s daughters, JC had threatened to get rid of her if she got in her way. 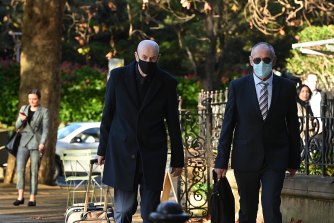 JC was a cruel mother to Dawson’s two daughters after the marriage, refusing to pick them up from school, banning the use of the word ‘family’ when referring to them, and tying their hair back so hard their scalps bled, the court heard.

“She really treated them as outcasts in their own home,” Paul Dawson said.

Police claims Dawson had anything to do with the alleged murder of his wife were preposterous, he said.

“You’re not the sort of person to do this. Anybody who knows you knows that,” he was heard telling his brother in 1999.

Media reports that his brother was violent were outrageous because he was the least violent person he’d ever met, Paul Dawson said.

JC’s description of the Gold Coast home she lived in after marrying Dawson as a “compound” was laughable, he said.

He also dismissed claims that his wife Marilyn Dawson had been seen practicing how to forge Lynette Dawson’s signature after she disappeared as “complete and utter garbage”. The court previously heard the signature was forged on a life insurance policy taken out under Lynette Dawson’s name.

He told the court he didn’t question Lynette Dawson taking some time away from the marriage because his brother had done the same in December 1981, when he had driven north towards Queensland with JC.

After his wife disappeared, Dawson drove up to the Central Coast several times to look for her, the court heard.

Paul Dawson admitted he was not in favour of his brother’s relationship with JC when they first started dating in late 1981.

Lynette Dawson was a good mother, but was not overly affectionate towards her children, he said. She felt they did not need her as much as the kids she looked after as a nurse and childminder, because her husband was hands-on and would take care of most of the mothering and fathering.