I'm confident there are plenty of people internally quoting WB Yeats when thinking about the times we are living in: “Things fall apart; the centre cannot hold.” It certainly resonates with me as I reflect on the forces affecting the media landscape and public opinion in this country and across the world. 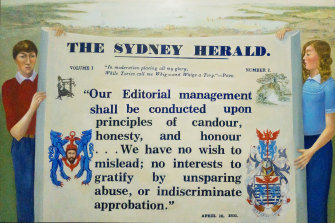 Sydney Morning Herald charter painting drawn from the work of Alexander Pope, and was quoted in the Herald’s first editorial.Credit:David Porter

The centre is where the Herald aims to be when it comes to our offering of opinion and analysis. As I walk into our office (now that lockdown has eased), I go past a painting I first saw in the Jones Street building when I began my Herald cadetship. The motto at its top reads: “In moderation placing all my glory, While Tories call me Whig and whigs a Tory.” It’s drawn from the work of Alexander Pope, and was quoted in the Herald’s first editorial. It’s an outlook that has guided this newspaper for 189 years.

As our world becomes more polarised, more populist and, thanks to COVID, more dangerous, the task of opinion editors has become more challenging, a fact brought to everyone’s attention after the controversial publication of Senator Tom Cotton’s 'Send in the troops' piece in The New York Times.

On the Herald’s opinion page in print and online, we strive to hold fast to the newspaper’s founding ideal to bring readers a diversity of ideas and voices: well-written, informed, but not necessarily ones our readers – or we - agree with. Publication is not endorsement but it is a signal to the reader that we think a piece is worth your time. We would not, for example, publish a piece that denies the science of climate change.

"We want to stimulate debate and bring points of view readers might find enlightening, even if they ultimately reject them."

We do not want to be dull, nor print only the safe and the predictable. Light and shade, left and right, serious and frothy: finding a lively mix of all these with a good dose of Sydney-focused pieces thrown in is the job of my team.

We cannot possibly publish every side of an argument – space is limited, standards high – we aim for the most engaging, insightful pieces. Sometimes a debate gets overtaken by events, because we try to keep our pieces focused on the issues of the moment. Sometimes opposing arguments are weak or poorly written. We serve the readers, not particular agendas.

Curating a contest of ideas in times of great uncertainty and divisive politics is tough. The stakes are higher. The pitfalls deeper. Holding course is harder.

During the height of the COVID crisis in Australia, we were hugely aware of the need to be responsible in our choices, but also aware that in a democracy it is crucial that the actions of our leaders are debated and tested and our readers given access to a spread of opinions.

This was also a time when many good potential opinion writers were locked away planning the national response while plenty of others filled with “passionate intensity” were clamouring to be heard. We were inundated with an unprecedented number of submissions.

Many judgment calls were made about what or who to publish, and when. To hold off until facts became clearer, or to publish because on balance that was in the public interest.

Were all of these decisions correct? Undoubtedly not. It’s a fantasy to suggest that judgments made under the kinds of pressures endemic to the news business will always be right.

I don’t know the exact circumstances that led to the publication of the Cotton piece at The New York Times, and my sense is that the American situation at the moment is painfully particular. The pressure on that masthead under the Trump presidency, the state of New York City wracked by COVID, the failure of the country to confront racism and the legacy of slavery, the President’s authoritarian tendencies make for a fissile mix.

But as someone who has weighed up the pros and cons of a controversial piece, I have much sympathy for the pressures the Times opinion team must have been under for months prior to publishing Senator Cotton. Publishing serving politicians is always something we consider carefully. For example, we require them to give perspectives beyond standard talking points, and more detail than in a press conference. We reject pieces that are press releases disguised as opinion.

But the increasingly divisive way in which political and cultural argument is being conducted in Australia and elsewhere is an alarming development for those of us whose job it is to contribute material to public debate. Social media is contributing to this, though the trend is also evident in the mainstream. Proportionality is in short supply as is listening to those with whom you disagree and trying to understand their perspective or respectfully change their mind rather than bullying, belittling, dismissing and attacking them. It is corrosive. Both of what we might once have thought of as the right and left are guilty of this behaviour.

We are in a moment of disruption: where many old certainties are under challenge. For some, change is not coming soon enough – and they are angry. For others, any change is too much – and they are angry too. Building walls and retreating into silos will not stop change - and I fear for the kind of world those trends create.

At the Herald, we strive in tumultuous times to bring thoughtful opinions to you so that you can test your own ideas against those on our pages, be enlivened, enriched and informed members of a healthy democracy.

Coach Of Brentford: We went from a mid-level team to the third team of the season. This is an incredible achievement
Burnley are not going to sell Tarkowski for less than 50 million pounds
Lester wants to rent Trincou at Barca with the obligation of ransom for 50 million pounds
Scott Parker: Fulham have a lot to progress. And I am happy about it
Manchester United are threatening to pull out of negotiations for Sancho if Borussia do not reduce the price from 120 million euros
Cesc about Casillas: You are a mirror to look into
Lone mascots are another symbol of the year
Source https://www.smh.com.au/national/nsw/a-balance-of-opinion-a-letter-from-opinion-editor-julie-lewis-20200702-p558i8.html?ref=rss&utm_medium=rss&utm_source=rss_national